I see alot of people complain about easel and can not do anything with it.I often use other software like Vcarve but you cant beat the ease of use of easel. If I want a fast prototype easel cant be beat in what I often do in the shop. Learn to like to easel to use new bits or cut things you thought it wouldn’t cut. Here is today’s easel project just pulled from the machine. Also I just got back from Walmart I had to buy a new keyboard to edit this post due to the fact my other keyboard was broken and did not function properly. like no shift key or caps. 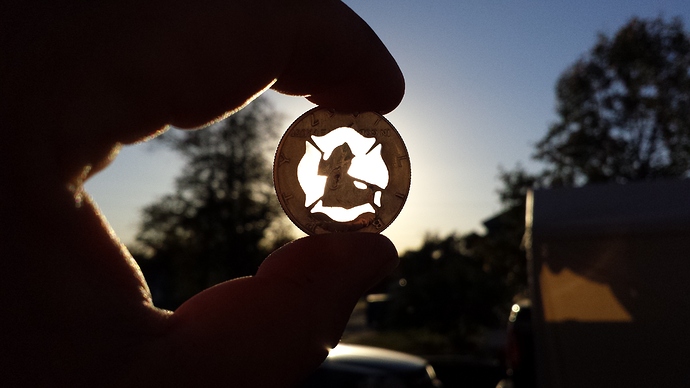 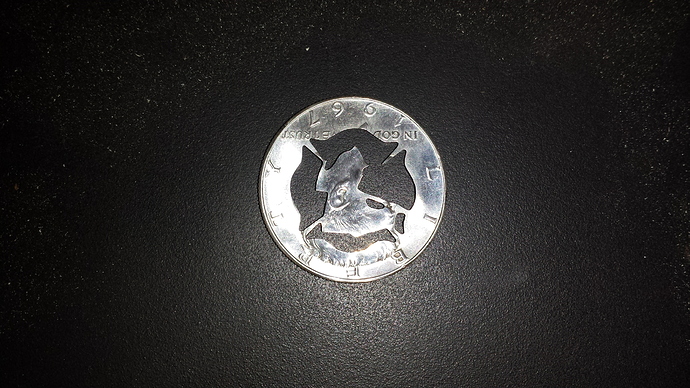 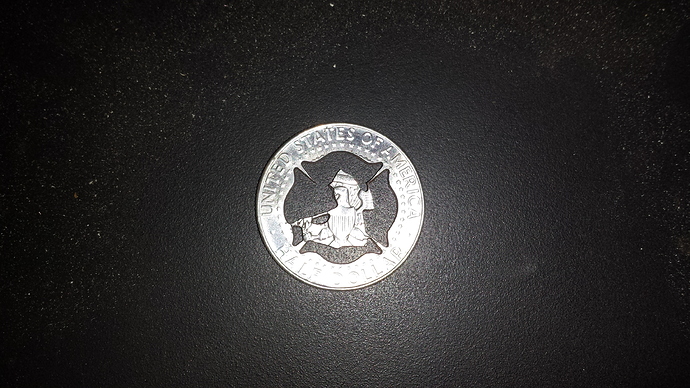 i see you edited my post i did mean lie as in lie to the software to make things work. the coin was cut with a vbit

Interesting process, but you might want to type your posts in a more readable manner. All lower case and no punctuation makes it difficult to read.

That is amazing, I would have bet (and lost) money that it would be impossible to get that kind of detail when cutting a coin.

How did you think to do that? Had you seen coins cut like that before?

What spindle did you and what RPM?

I make coin rings and have plans on cutting names into the rings before i form them. This was a test to see what the bit can do.

That is a great idea. The coin rings are already very nice. Being able to customize them will take it to the next level.

Well I have the dewalt mount and have a dewalt 611 but. I haven’t mounted the dewalt as of yet i am doing a test on the cheap harbor freight $20 trim router and it is rated at 1/4 horse @28,000 rpm. To make it fit into the mount one side of the handle was cut off and a thin printer transparency sheet cut for a shim. 148 hours of use so far and still going. the dewalt will not be used until the cheapo dies. 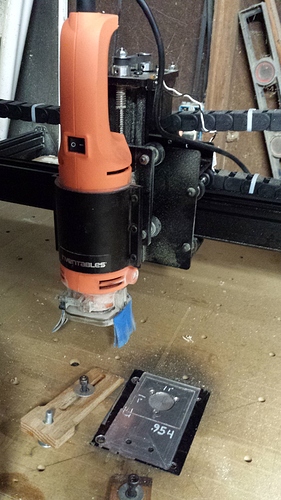 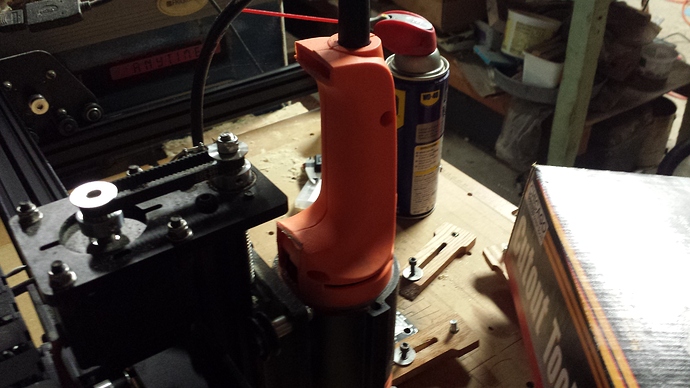 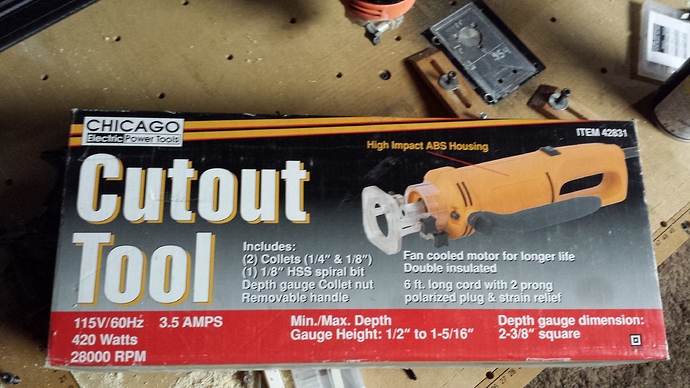 Wow, I was thinking about using that same router that I have too but I wasn’t sure how it was going to perform. You just answered my question that I was gonna post in the forum, thanks for posting that!

be careful when cutting handle on mine a power wire looped around a screw mount i cut through mine. my recommendation would be to disassemble first then make cuts. hey on the plus side you get 1/4 and 1/8 collet

I thought that I had the same router but is not, Im gonna go this weekend to see if they got that one that you have. I definetely want to try that router, can’t beat it for $20.

well then here are some settings i have used with pine to give you an idea
3/4 pocket bit DOC 1/16 @ 50 IPM
1/2 pocket bit DOC 1/16 @ 60 IPM
90 deg. 1/2 inch v bit DOC 1/8 @ 140 IPM slower gets smoother cut 80 IPM seems to be the sweet spot
1/8 2 flute carbide upcut endmill and ballnose DOC 3/8 @ 100 IPM
I have not studied speeds and feeds this is based on what has gave me the best cut at highest ipm
Also with a little bit of cutting the routers depth gauge can be used as a dust shoe
I am cutting metals but am still in the learning process
And if you are doing 2 stage cutting ipm can be higher on the first pass
And last of all the locking pin is of poor design don’t go crazy over tightening

Thank you, I really appreciate the help. I haven’t had time to play with it much. This machine can get frustrating. But I guess for what we paid for it thats what we have to deal with. I guess that since I work with a commercial grade cnc on the daily basis, Im used to that. I just wanted my own little toy at home. I’ll give this little router a try before I buy the dewault or something like that. Hopefully I’ll fall in love with the machine if not, time to move on to something better. You did used the same spindle mount right? Did you made any changes to that mount?

i used the dewalt mount and a sheet of plastic .023 in thick cut just long enough to wrap the router.
I have more issues with the fanuc robodrill and toyoda fh-fx at work than i have the xcarve lol

Ok thanks, gotta get the mount then . And try to dial the machine in the meantime. Didn’t know that it was gonna be a pain . We have a Gerber profile that is about 14 years old an it works flawlessly. I wish the xcarve gets like that someday, lol. Thanks for the info!

In the mean time if you have a dremel you can put it in the stock mount just use the aluminum spacer from the stock spindle makes a nice little upgrade and a perfect fit. just slide it into the mount from the top till it hits the plastic ridge just under the power switch. I used the cheap black dremel 200 i think it was don’t know if the gray high end dremels fit.

I don’t have that dremel, I have the trio. I just keep using the the stock spindle for now , gotta give it some type of use I guess.

Shane - I really like those fixtures you created. I have to make 100 brass coins and you just provided a better way to manage the workflow. Thank you.