Easel missing part of a cut

I’ve run into this issue where Easel is not cutting this portion of the object. There seems no reason why it wouldn’t cut it being the surface that requires the cut is more shallow than the border cut which goes all the way through the material. Is there a work around to this or just a setback of the Easel software? 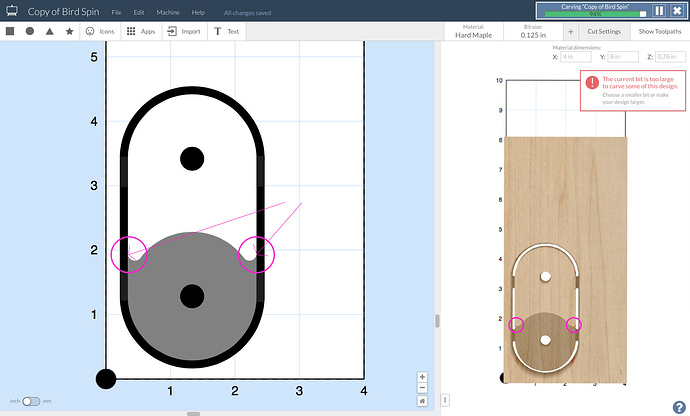 Could you share the easel link for me and I will take a look for you!

right off the bat though it seems that the bit you are trying to use is to large for the design do you know the radius of the part that it wont cut?

and if you click show tool paths and unckeck the material and then look at the tool paths do they show the same thing?

easel doesnt like to cut things exactly the bit size for whatever reason so if that radius is .125 change it to like .135 or .130 and it should carve it

@ontheEDGE Thanks for responding. Easel’s cutting order is the black areas first, then the grey. When it cuts the grey, it acts as if the black is still there and will not cut the corner between the grey and black. If easel is cutting the grey and black areas, I’m curious why the bit could not make a path through the final piece of white it is leaving left over. The black border is acting like an invisible blockade to Easel.

There’s a little bit of a trick to this.

For whatever reason, where toolpaths intersect, the renderer tries to use the bit diameter to determine what to do.

If you took your grey shape and made it so that it bled over the black outline, it should cut just fine. The outline will still cut because its shape is still there. Make sure to send it to the back as well.

I will give this a shot and let you know how it turns out. Thanks!