Easel V-bit, and Using a Scraper on Paint-Filled Letters

I’m making a frame to hold a going-away picture (11x17) signed by a bunch of us for one of my coworkers. I used 5/8" thick pine, and hollowed out an area in the middle to hold the poster and a piece of acrylic. I decided to try using a V-bit to carve his name and title into the frame, and it turned out VERY well.

After removing the few remaining fibers with a plastic brush, I put two layers of shellac on the entire board, then filled the letters with enamel paint. I wanted to remove as much over-filled paint as possible before I sanded it down and removed the shellac, since sanded black enamel paint tends to turn my wood gray. I started thinking about some small scrapers I had ordered from Rockler (or similar) a couple years ago, that were still new in the baggie. 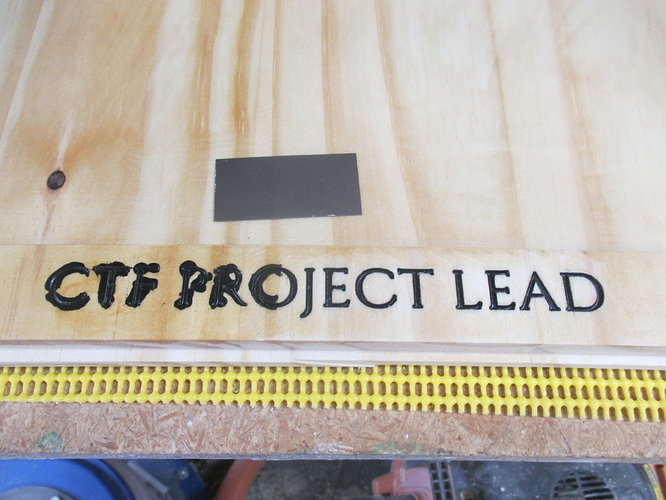 It only took a few passes with the scraper to remove most of the paint, as well as some of the shellac. It may be worth using the scraper on the rest of the picture frame to remove as much shellac as possible, since that’ll save me a sanding disk.

Just an idea, I think the scrapers were only a couple bucks. I didn’t even put a curl on the edge, that was how well it worked brand new.

I always have a hard time with this, thanks for the info.

Nice, will definitely have to try this.

Ahh the good old card scraper, faster and less messier than sanding and can if used correctly can leave a surface ready for paint or stain.

The final project turned out fantastic! I gave it a couple coats of semi-gloss polyurethane after scraping and sanding the shellac off, and it made the pine turn a beautiful yellow. The last name has been removed and I don’t think I can show the poster that’s going in it (still trying to get permission), but here’s the frame with the acrylic inset: 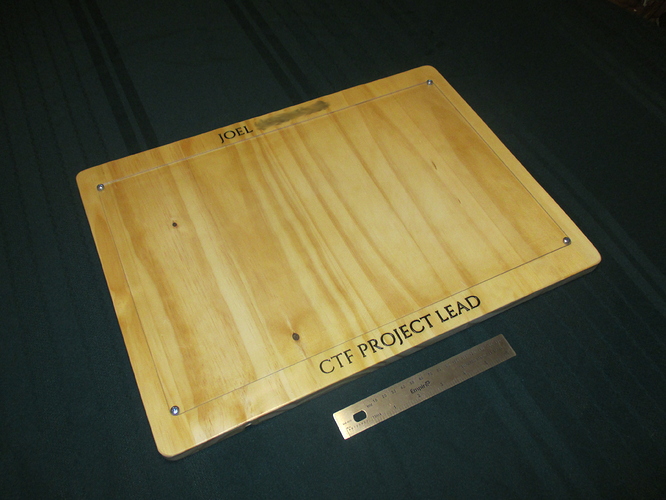 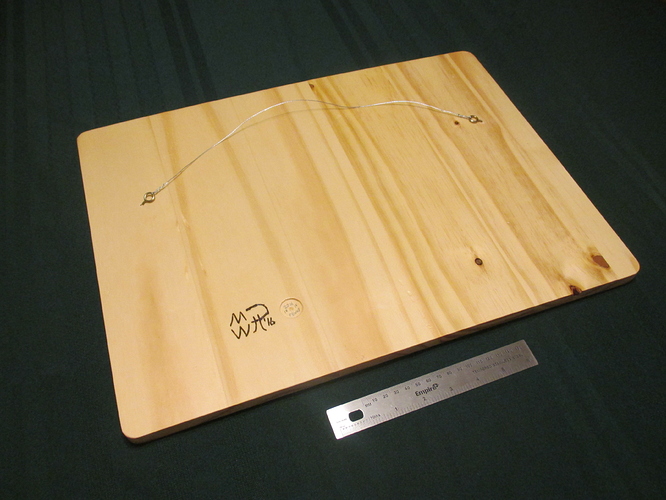 I planned to embed a 2016 penny beside my logo on the back, but apparently they’re not out yet. Or at least the bank and gas station here didn’t have any. Oh well, I’ll tell my friend that it’s up to him to finish the job I started, just like I did every chance I could at work…

Robert, great idea with the scraper. I never considered it. I either sanded or used the thickness planer to take a hair off. But now I’m definitely going to give the scraper a try. Thanks for the tip!

And the project turned out great!

Robert, just a quick question. Did you use text letters from Easel on this? I ask because I’d like to know if you got the very nice looking carves by just using a v-bit, or whether you also used something like f-engrave or vectric to generate specific stroke paths.

Hi Roger, I used Easel’s font Cinzel to get the lettering on the frame. I did a series of depth cuts and the .030" depth seemed to look best with the 30 degree bit.

Very good to know, thanks. Just got some v-bits in the mail today, so will have to experiment with them.