I have a larger carve setup right now, 28x16, with a two stage carve. When I go to generate toolpaths, Easel will do that, no issues, both sets. When I hit “carve” in Easel and go through all the setup steps, once I hit carve it starts to generate the toolpaths, gets to just a bit left on the progress bar then sits for about ten seconds… Then I get the Aw, Snap!" message from Chrome. Out of about 10 attempts now to make it work for this carve, I got it to start one time, but, had to abort because I told Easel to use last home position, but didn’t realize that was cleared when I reload Easel due to the damn “Aw, Snap!”. I tried loading a less complex carve in, just a single stage and it started just fine. I have three of my five bars on internet signal strength. Also, I’ve ran quite a few of the less complex carves the last few days in the garage with no issues, same internet (I recently moved my unit in there). Do I really need to run a network cable out to get this to work? The only thing I can think is the connection to the net. Unless there’s a problem currently with Easel…

Alright, just bought a cable to get from my network box out to the X-Carve in the garage, didn’t help one bit… Keddy

Have you tried from a different browser?

If you are on Windows Chrome is the preferred browser, but you may be running into a memory allotment issue in Chrome.

If you are on a Mac give Safari a try…

It does seem like it is a browser issue though and not a network one… In fact, once your project is loaded up then you could disconnect the computer from the network entirely and it will still calculate tool paths and run the X-Carve.

I am using Chrome… tried to use Explorer last night but some sort of add on is shutting it down, looks like a trip to Geek Squad.

Keddy, I had the same type of issue a while back. I was attempting a pretty complex lake bathymetry cut. It was taking “minutes” to calculate tool paths before finally "aw snap"ing the browser on my older laptop.

Luckily, I have a co-worker (Inkscape guru) help me simplify the SVG without losing too much detail (which is what I was after) and it worked great. Unfortunately, my guru just took another job 2 weeks ago.
Sorry that I can’t tell you exactly how to simplify your design so hopefully a guru can chime in with some ideas.

I also tried your fixes (improving connection to garage, other browsers, etc) but simplifying the SVG was key for me. It still looks pretty good, IMO. 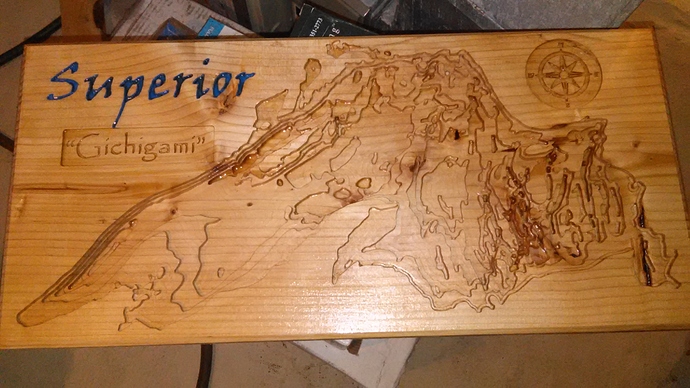 @KeddyKleinbergs can you post your SVG here to this thread? I may be able to help simplify.

Well, tried a couple different laptops, including neighbors, and everyone was doing the same thing with Chrome. So my fix has been to use one of my other laptops and using Explorer. Paul, I do have InkScape, but this is all new and a learning experience for me, but I’ll look into your suggestion in the future. Funny thing is, your design is much more complex than mine. Mine is just pretty large, but maybe a bit more detail than others I’ve done in the past as I get used to the machine and software…

Did you ever get this fixed? I have a small but detailed design and it won’t carve