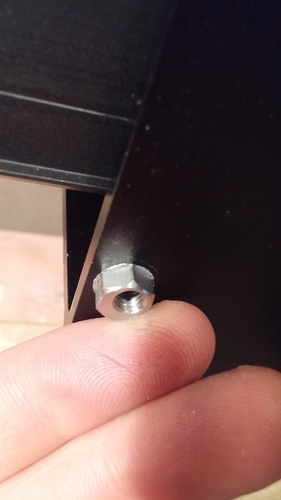 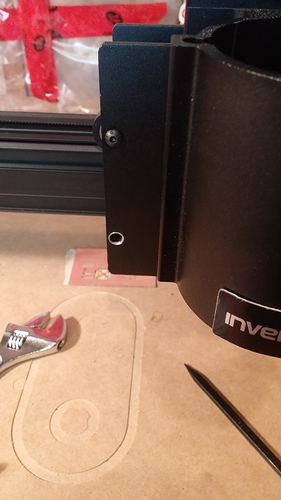 One of the eccentric nut on my machine’s gantry is hard to adjust, doesn’t sit flat on the gantry and is eating at the metal. Clearly that wheel is somehow misaligned, which is popping the nut out at an angle and then turning and churning at the gantry, but I’m starting to lose my temper so I thought I’d ask if someone has dealt with this, what I can try, etc.

I’ve done the 30-mins stiffening mod if that can impact anything.

The 30 minute is the one where you wedge a bar of metal between the makerslides, right?

Oh boy I just saw that Rick and morty episode. I hope you don’t burst into thin air after we’re done with this!

Yes the V Wheel screw is straight. I haven’t checked the rest, but the x-axis is fairly smooth so I’d wager they are as well.

Have you ever tried being eccentric and a spacer at the same time? IT IS A PARADOX

But really, what Bill said.

Will look into that. Kind of a let down though that the stock hardware is problematic like that.

I know what you mean. I used blue loctite and have never had problems with my nuts, maybe try that first?

For now I found a way to seat the eccentric nut properly by loosening the opposite v-wheel. I’ll look into the improvements eventually. Phil you were talking about this Phil Johnson Build ?

I had that problem. Before I switched to longer bolts and lock nuts holding the z axis eccentric nuts in place, I disassembled the whole thing, and found I had installed the delrin nut backwards. Or upside down. Don’t remember, just know that it was wrong.

Spacers are the similar to nuts. Problem here is trying to tight eccentric nut. Try tightening the bolt by holding eccentric nut stationary at the proper level of adjustments.

I think the eccentric nut is simply a little bit too small, or rather the edge that seats outside the hole is too small so there is very little material to take up the force when tightening. If the nut is not kept still while tightening it just becomes worse, but the problem is there anyway. If the eccentric nut had a longer boss like some of the eccentric spacers you could maybe put a flat spacer between, but a better solution would probably be a nut that flares a little bit between the boss and the hexagonal part.

but now I’m strongly considering also replacing my eccentric nuts with these, as I like the way they touch more of the surface of the gantry.

Just out of curiosity, when you adjusted your eccentric nuts prior to them eating through the gantry did you loosen the nylon lock nut at all or leave it tight?

I wonder if loosening it just a hair so you aren’t trying to adjust the eccentric nut while it has such a high preload on the gantry would prevent it from eating into the aluminum as much.

I don’t know how well those work. Back in May I followed AlanDavis’ advice about not tightening by the eccentric nut and never had any problem after that. I don’t think I’ve had to adjust the wheels in weeks, too.

To recap what how it’s done : You set the eccentric nut at the desired angle (the angle that sets the wheel at the right distance to hold the carriage without binding it), and then you hold it stationary while tightening the screw. Really works wonder. If you ever need to readjust, you do it in reverse : loosen the screw while keep the nut stationary, and adjust.

Now I have reversed the assembly and lock-tited the screw and the eccentric nut, per this picture (not mine). 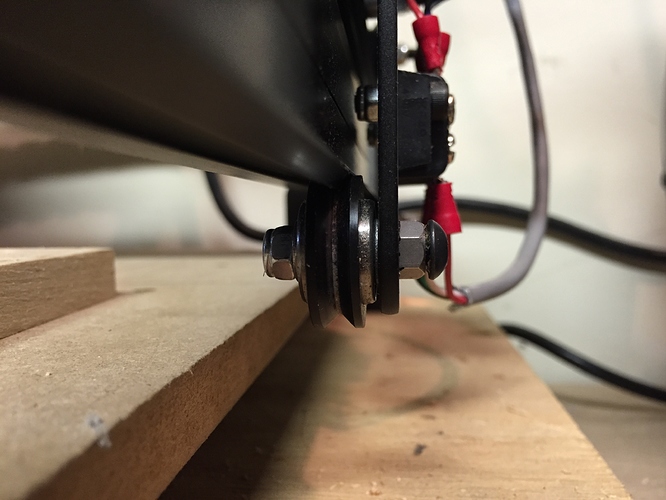 The ease of adjusting the wheels is 100% improved, and I don’t expect to have further problems. My question about the eccentric nut with the flange (more surface area) is more a “wouldn’t this have been better, although what I have is surely good enough” kind of a thing, I guess.

From a mechanical standpoint the eccentric screw or even eccentric spacer with a washer-like base would certainly be better because the round base (assuming it is relatively precisely machined) would not only provide more bearing area to prevent the spacer/nut from digging into the aluminum but would also reduce the potential for misalignment of the bolt (i.e. installing the bolt crooked) since you would have a uniform base all around.

With that being said, it looks like the method Phil references, and I think that’s the same one you got your image from, is possibly the best method using the stock hardware.