So I’ve had my xcarve for some time but do to a busy fire season I never got to finish. I recently got the upgrade kit as mine was the older model. I’m just about done and was swapping the screws around and with loc titer for the eccentric screws. That’s when I noticed on my y axis when I rotate them into the tight position they get kicked at a slight angle and don’t sit evenly with the guide rail. Is it supposed to do that or should I add a thicker washer to take up the space to keep it parallel to the guides? Any help would be appreciated, Tough to take a pic but here’s the best I got. 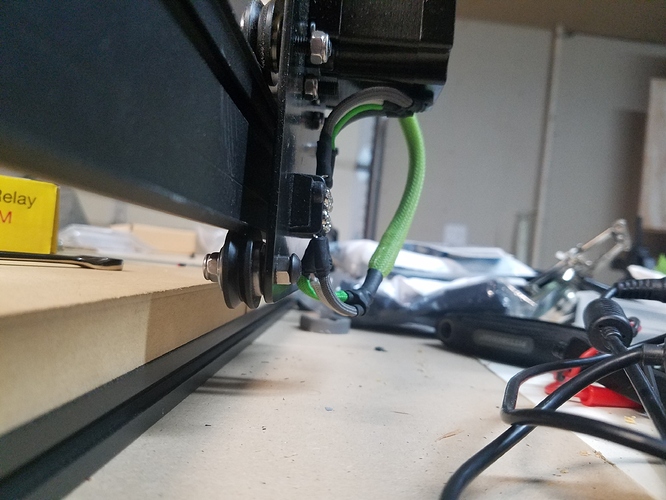 I think I might have resolved the issue but I’ll have to check after a run or two but it just seems off to me. Another question is on the x controller is the small fan supposed to run all the time? If so I’ll have to put in a toggle power switch so its not running all night long. The moment I turned on the power switch on the back of the unit it started running.

I build custom computers so I know about cooling. My issue is even when the machine is not in use its running. The fan running 24/7 seems a bit obsurd when I’m in bed asleep and the machine isn’t being used. And by toggle I mean to the power supply to easily cut power when not in use. Basically a power button like what is on your computer.

Those chips are set up to dissipate heat on the circuit board. Adequate cooling is necessary under the board. the enclosure does not allow much air flow under the board. You can add additional slots to let air move but the fan on top will not push air thew them. Its a design over looked when dealing with the heat those chip generate. (This thermal problem was fixed in the new X-Controller.)
You can add an additional chip top heat-sink if you want to help with cooling but I think turning off the board will be the best way for what you are asking.

You use this to glue the heat-sink on. https://www.amazon.com/Thermal-Conductive-Heatsink-Adhesive-Compound/dp/B00KAOP4SY

Heat-sinks come in a variety of shapes and sizes. You will need to do a bit of measuring. Inventables my still have the cad files online for it I am not sure but as long as you can get a nice heat-sink that is the right size then your good. You can cut them down to size too. If find a cheap source you can have it cut to size. (You can have the Xcarve cut them as well)

The data sheet has dimensions and power information for these chips.
http://www.ti.com/lit/ds/symlink/drv8818.pdf

Make sure you have clearance for the heat-sink fins so the fan blades do not hit it.
Use the data sheet and make your thermal contact to the IC about the size of the heat pad that is on the underside of the chip. Use the thermal epoxy to bond the heat-sink to the IC and let it cure according to its instructions.
The heat-sink will help remove heat and you will still need to use the fan when running. However the chip will have extra heat dispensation when your not running any jobs sitting idle.
Also note that if the motor is turned off then no current is passing to it this is when you can have your fan in the off state. Unfortunately this is not the state after a job or even the state when the system is first turned on.
The sleep pin was pulled high on all 3 IC’s. So no sleep means you will not be able to power the fan off during non cuts.

This gets problematic as you will need to somehow monitor the motor current.
The best solution is to turn off the GRBL board once the job completes.
Or just leave it running it will not hurt it.

You can have the board turned off using an external circuit that trips a sensor/switch when it returns to the home position. You can throw a switch after it starts for activation. Then it will go home and then hit the switch that will kill the power to the board. This idea will require you to make a circuit or use relay boards to do this.
Unfortunately there really is no other way.

Looking at your picture, It looks to me like the eccentric spacer is not seated properly.

For the eccentric issue for what ever reason when I would rotate it to tighten the v wheel it would cause the v wheel be off kilter on the lower part so it would not be in line with the track. Once it did that it caused the eccentric nut to tilt and not be square with the steel plate. I believe I resolved that issue for now, but for the fan I understand if your using the machine the fan should run with out a doubt but once not in use have some sort of toggle on of switch to cut power completely. Being a firefighter I may be gone during the summer for a month or more at a time and that is a lot of hours on a fan that’s running 24/7 when the system is not in use. I’ll be putting in a toggle to cut power between the surge protector and the xcontroller power supply so when I am not using the machine I can shut it down completely. As the x controller will be going into a cabinet system I can’t easily just reach the power supply and turn off the power switch there.

I guess that I don’t quite understand the power issue.
When I turn off the power switch on the back of the controller, everything shuts down.
What am I missing in this conversation?

My previous post was meant for the old setup not the new X-controller.
FYI

I never said to just cut power to the fan, it’s to cut power to the entire unit. As the xcontroller will be in an enclosed cabinet I can’t reach the power supply switch on the back so I’ll be adding a switch much like those wireless 120v outlet plugs so you can turn on or off what ever is plugged into them. My problem is being gone for so long I don’t want to have to take it out of the cabinet after I’m gone for periods of time just to check a $5 fan.

You’re not missing anything I was first curious if the fan was supposed to run 24/7 if the power supply is on. Then I stated I don’t like leaving stuff on that I’ll be adding an on and off switch to cut power to the unit. My xcontroller is going in a cabinet where I can’t easily reach the switch on the back so I’ll be adding a toggle switch power switch. Think people just misunderstood. But no foul the initial issue was the eccentric nut causing issues which I hope resolved.

I just plugged mine into a power strip with a switch and use that. I can also cut power to the IoT controller, dust collector and air filter at the same time.