I have been flying control line aerobatics for 40 years and wanted to build an elliptical wing airplane. This is something that is impossible to build without tooling. For the design I found DevWING, a software that designs a wing in the way you would do it on paper, very easy to use and ideal for creating toolpaths.
For cutting balsa and plywood I built a ShapeOko2 with the z-axis modification. For the rest it is a stock machine cutting with a Dremel.
I started with the most difficult part of an aerobatic airplane, the tail plane. It had to be elliptical, strong AND light. As pictures tell more than words here are my first building pictures. 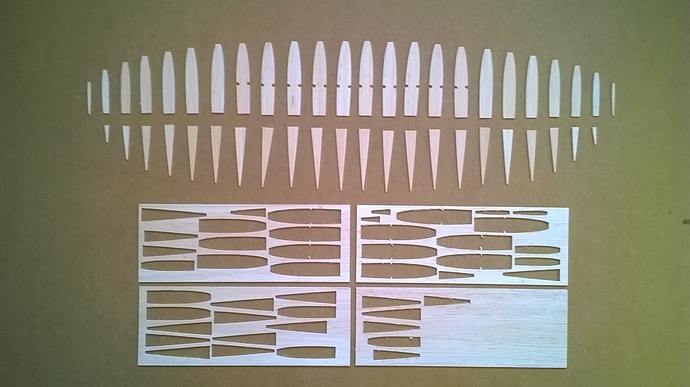 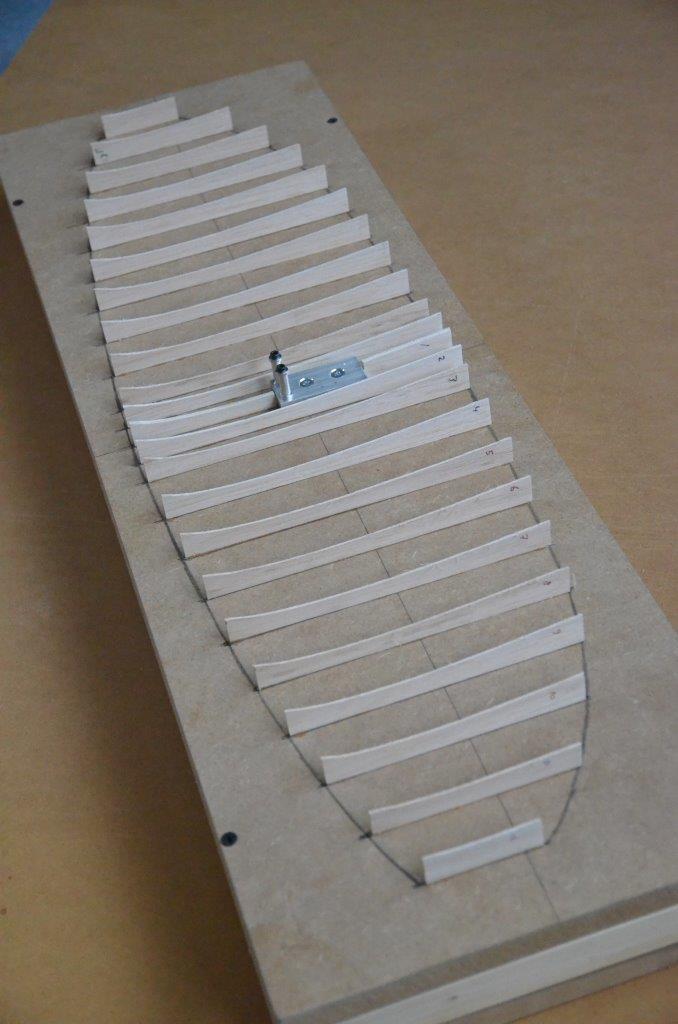 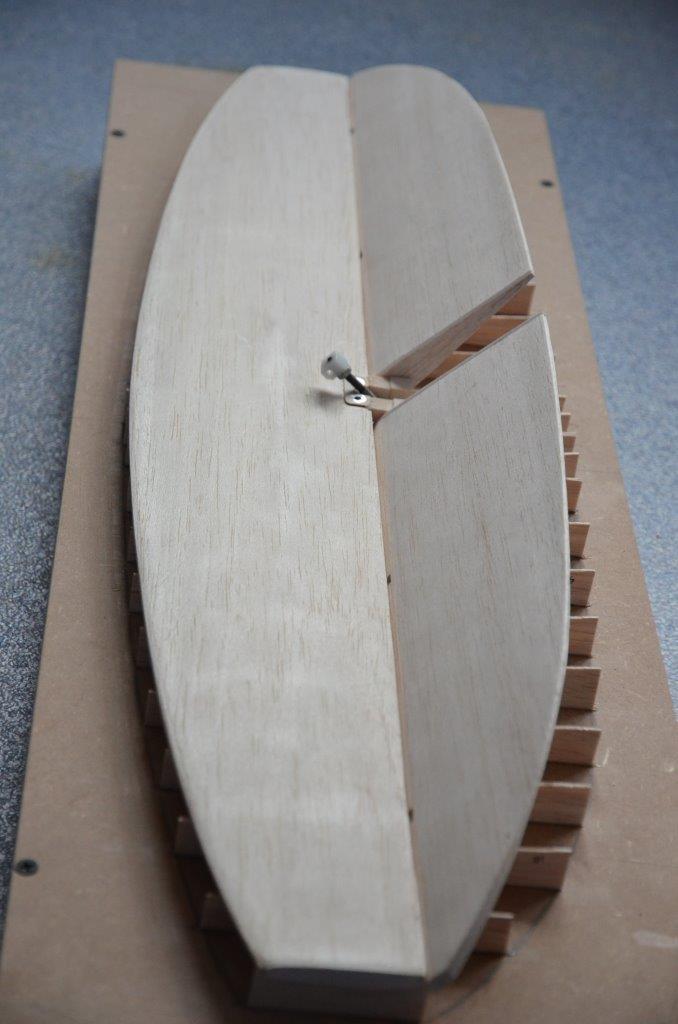 I spent approx US 1000 on my ShapeOko2, modified the z axis for US 200 and invested US 185 in two CAD CAM products (Fuselage and Wing). My experience in CAD was zero when I started. The learning curve is low, it took me a few hours to design my first trainer wing. Making an elliptical wing with all small details I want took a little longer. 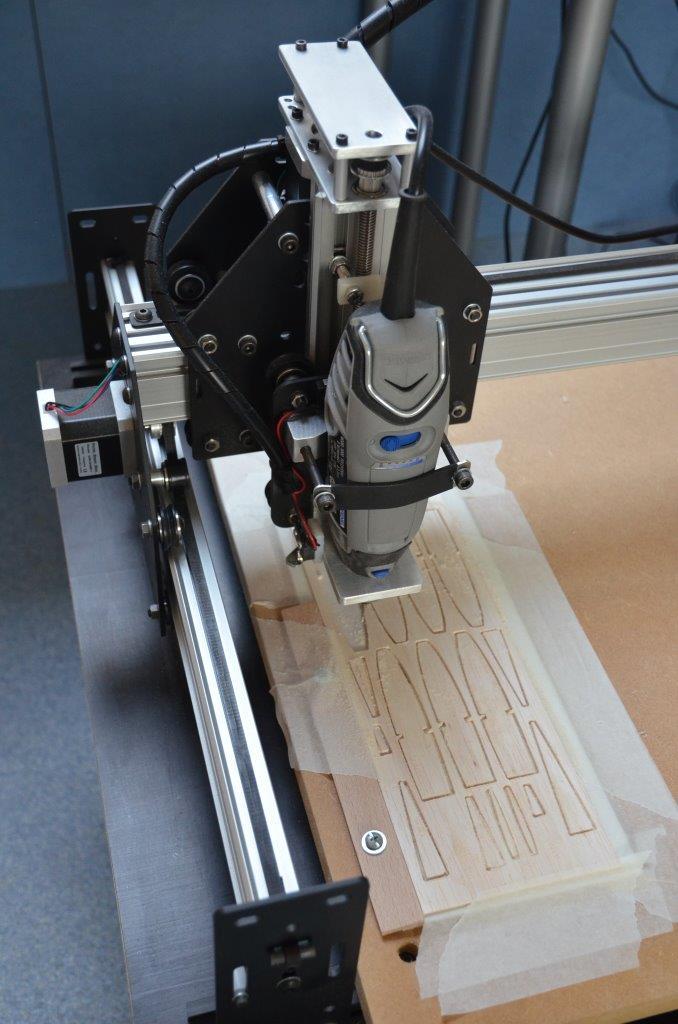 This is my Z-axis modification. For safety I added a top plate to the construction, a small hole still allows me to rotate the spindle for adjustment. 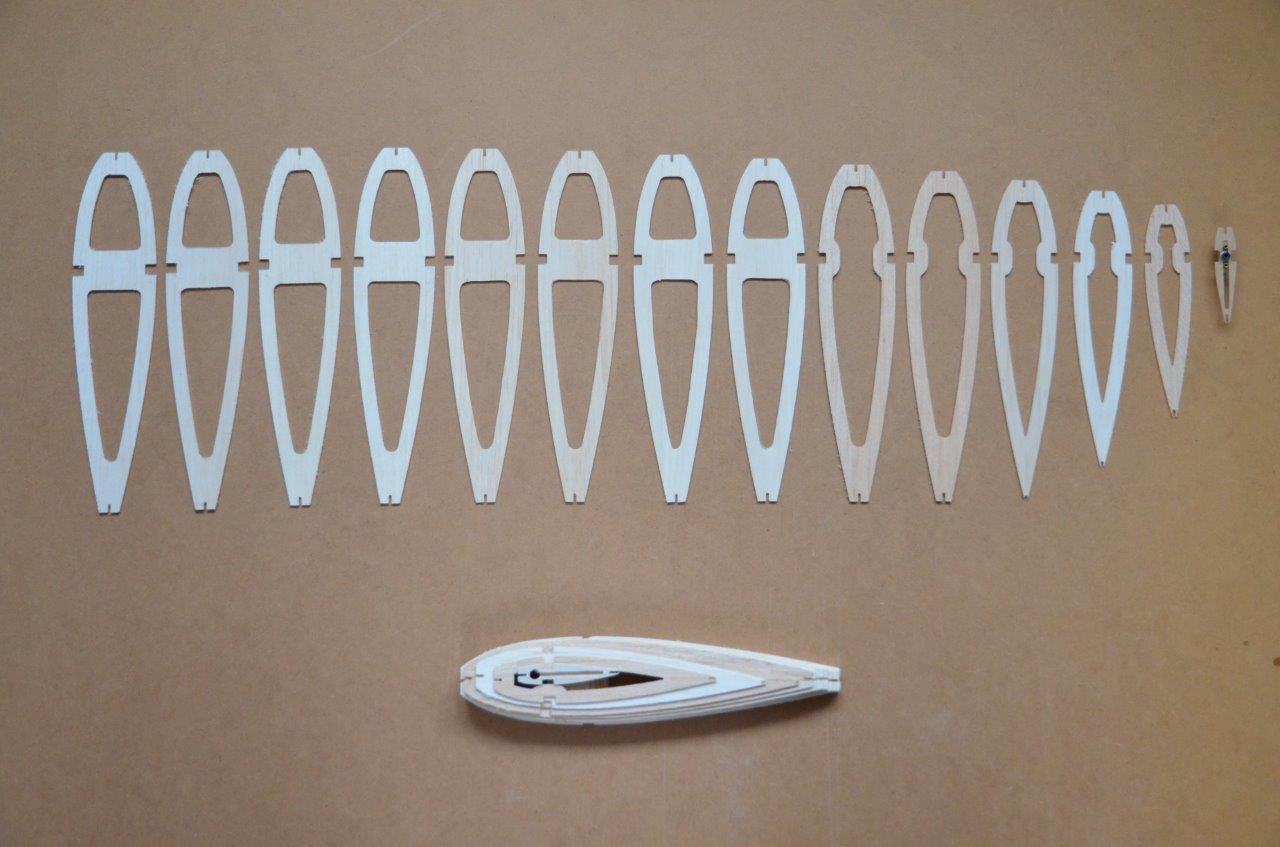 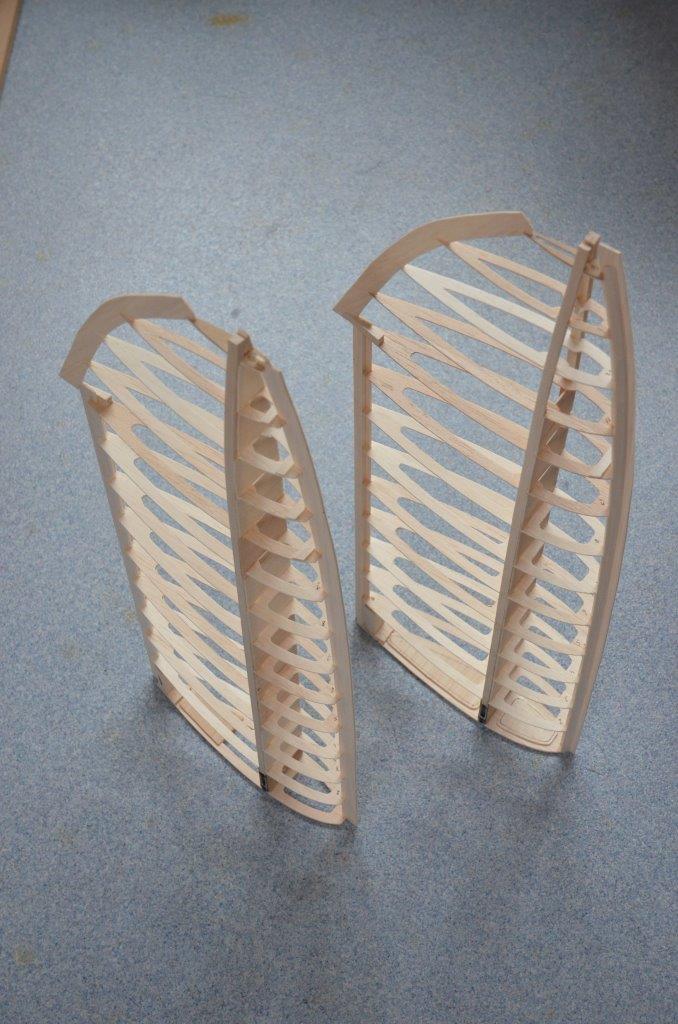 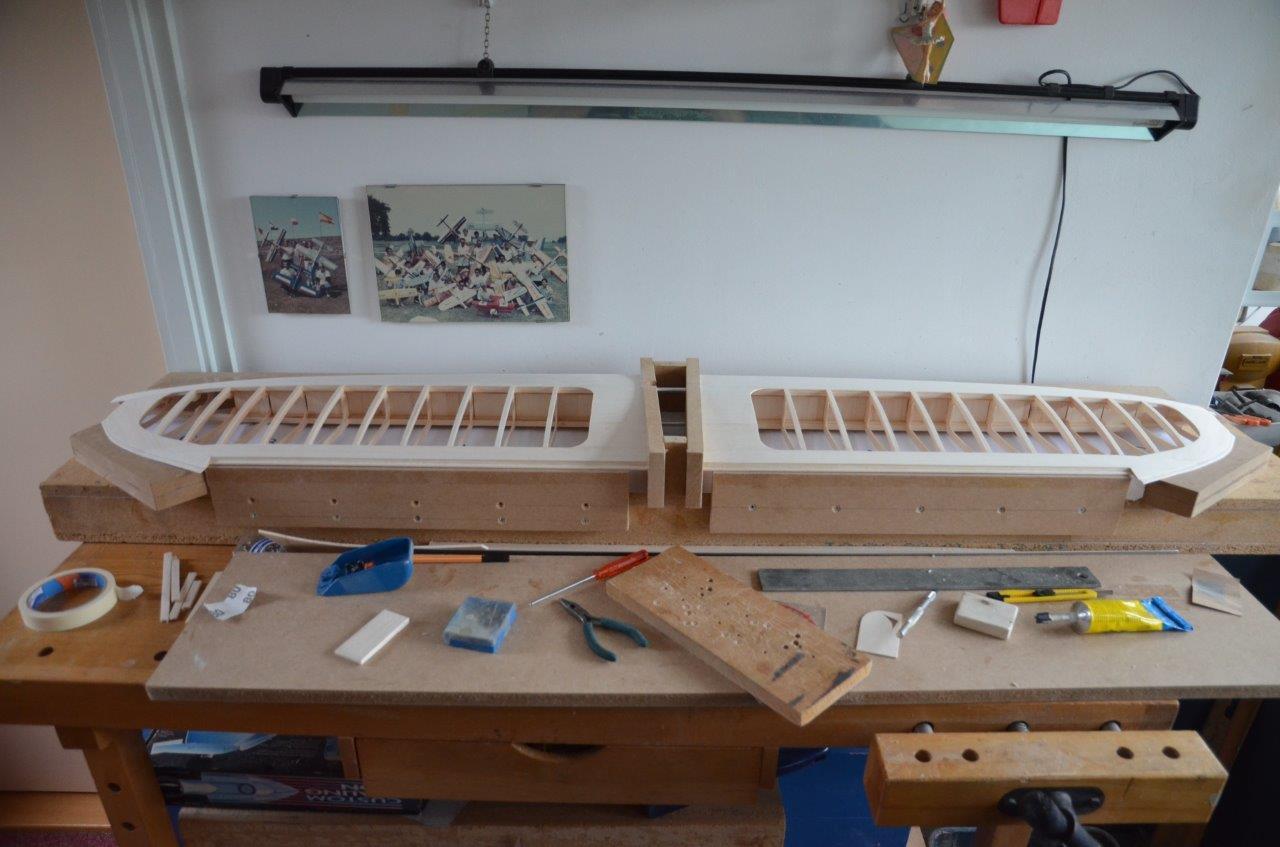 Assembly underway, the ShapeOko 2 takes a lot of work out of my hands but there is still enough old-school work to be done. This is the most accurate wing I ever built. 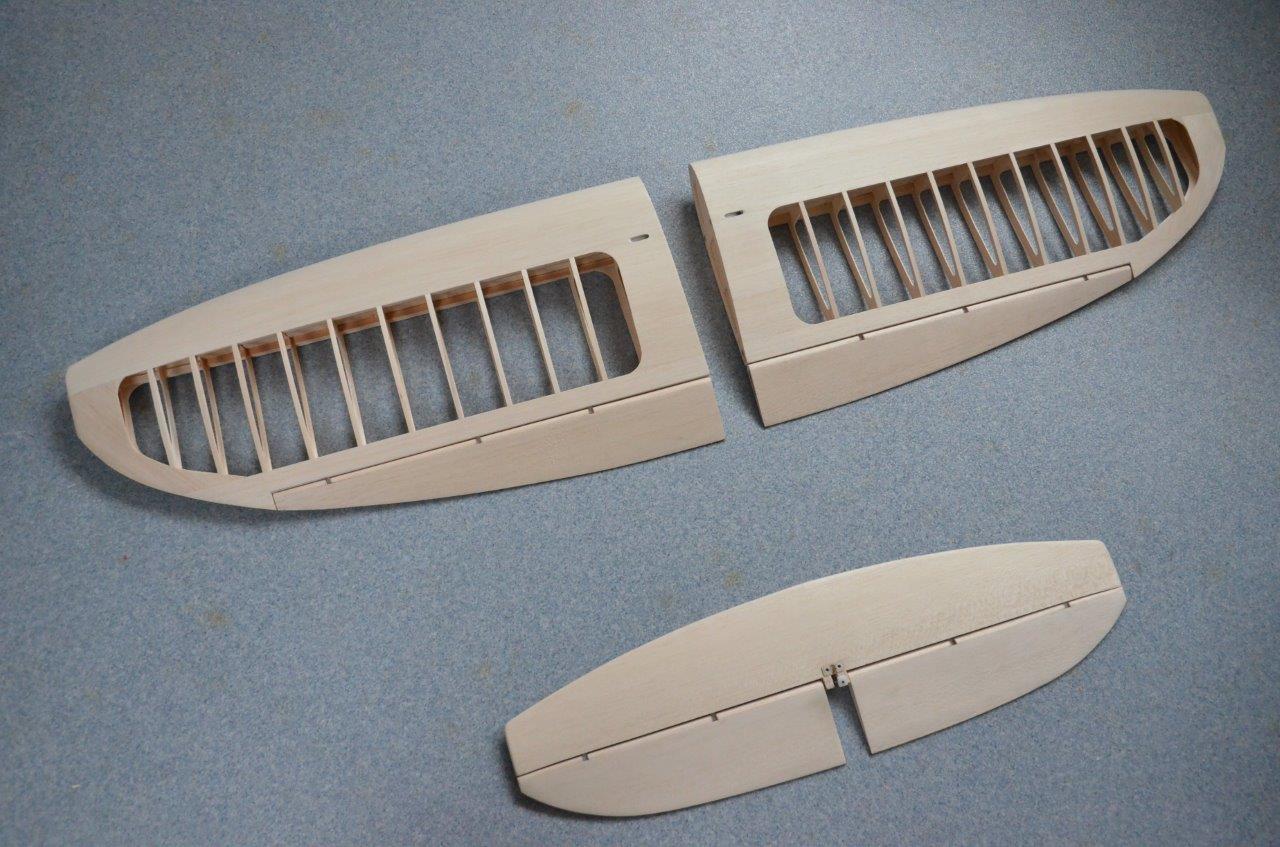 For the fuselage skin I needed a mould. The software helped me to create the formers 2,5mm smaller than the real size. Old school 3mm stringers and a lot of sanding later the mould is ready. I can wet wrap my balsa skin around this mould now. The canopy mould is just a big block of balsa. 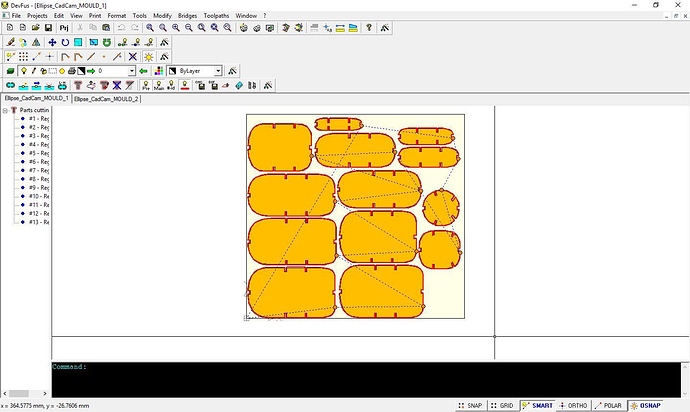 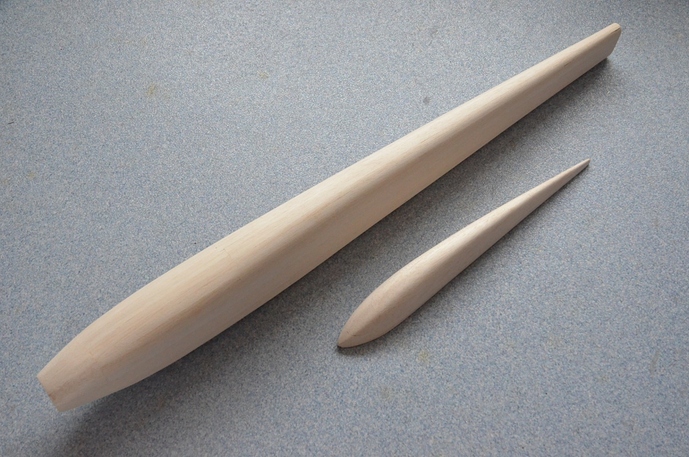 A control line model takes a lot of stress, formal wind limit is 9 m/s at 2m height measured for 30 seconds, we pull 13.6g at the exit of the wingover and the motor delivers 650 Watts peak output. I do need some formers for attaching everything, the advantage of CAD is that you can put a lot of detail to the formers saving time and materials at construction. Materials will be ply when something is attached with bolts and balsa for other forms. 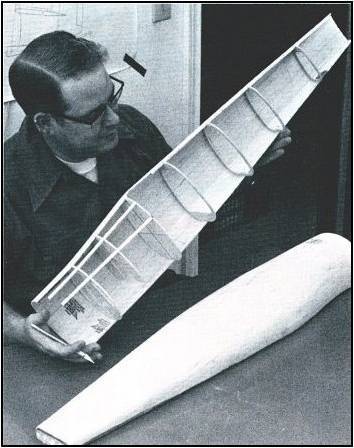 My inspiration for this technique, Al Rabe 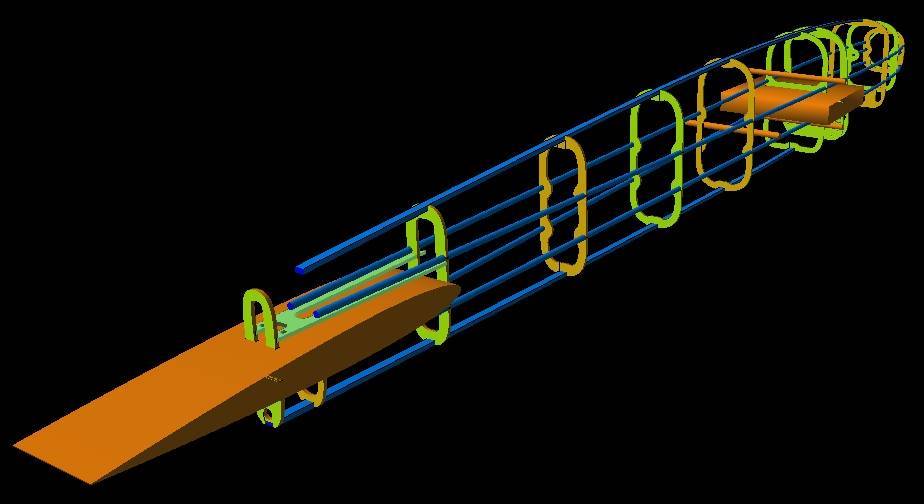 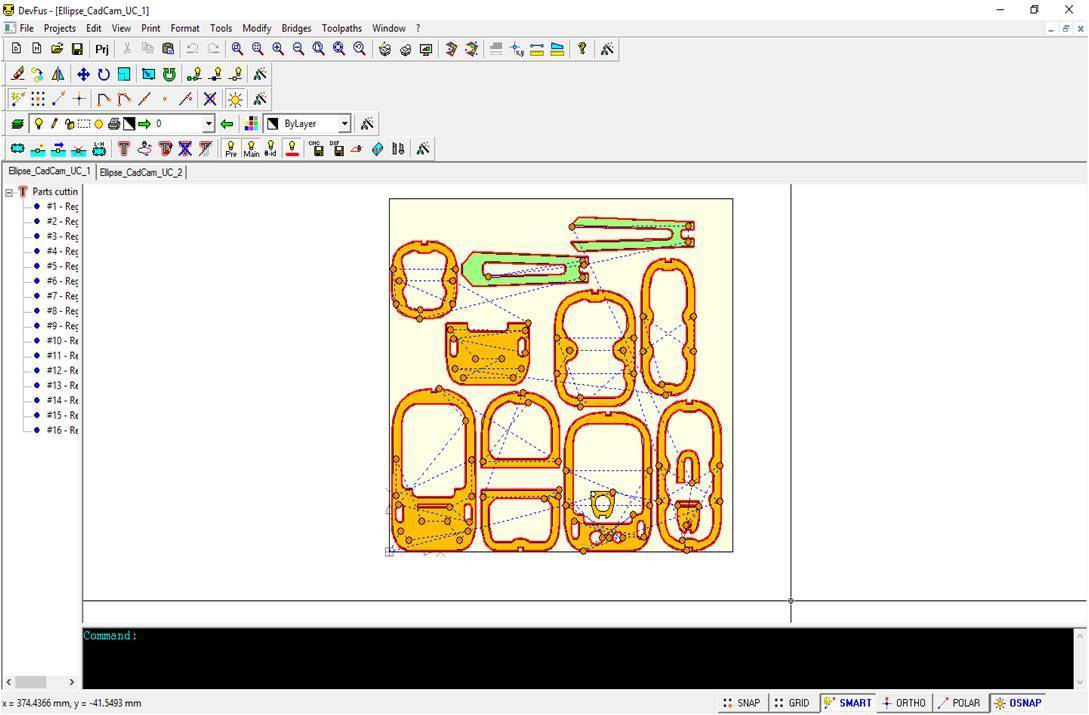 I’m a long time modeler… short time X-Carve owner (since Christmas) and you’ve inspired me to get off my duff and build a new plane (i’ve been flying mostly ‘gasp’ foam ARF’s the past few years).

1… What bit are you using to cut that balsa. Those cuts look super clean.

2… What was the Z-axis modification you did to your shapeoko2… and why?

As you can see on the cutting picture earlier I tape the balsawood on a piece of depron and I cut 0,5mm more than the balsa thickness. After a while you have to replace the depron. For cutting I use a 1,5mm dia spiral cutting tool from sorotec.de (I live in Holland) and my dremel at 60% of its rpm. The plywood (2mm) needs a stronger mount and is attached with two bolts and tape.

The original ShapeOko2 came with an single sided supported M8 Z-axis and the Nema17 towering on top of the Z-axis, I modified this to a belt driven z-axis. With through cutting you do not really need the better positioning of the Z-axis but the lower weight distribution of the z-axis makes everything run a lot smoother at higher speeds. 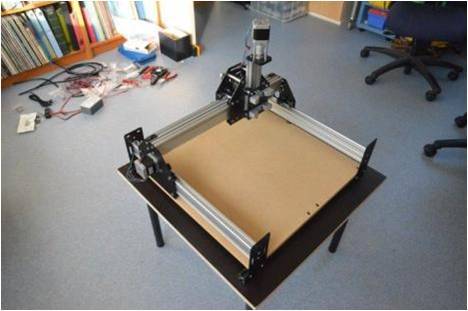 Original build before the Z-axis modification

Thanks! You’ve inspired me to try and cut out some some of the old Peter Rake plans i have laying around 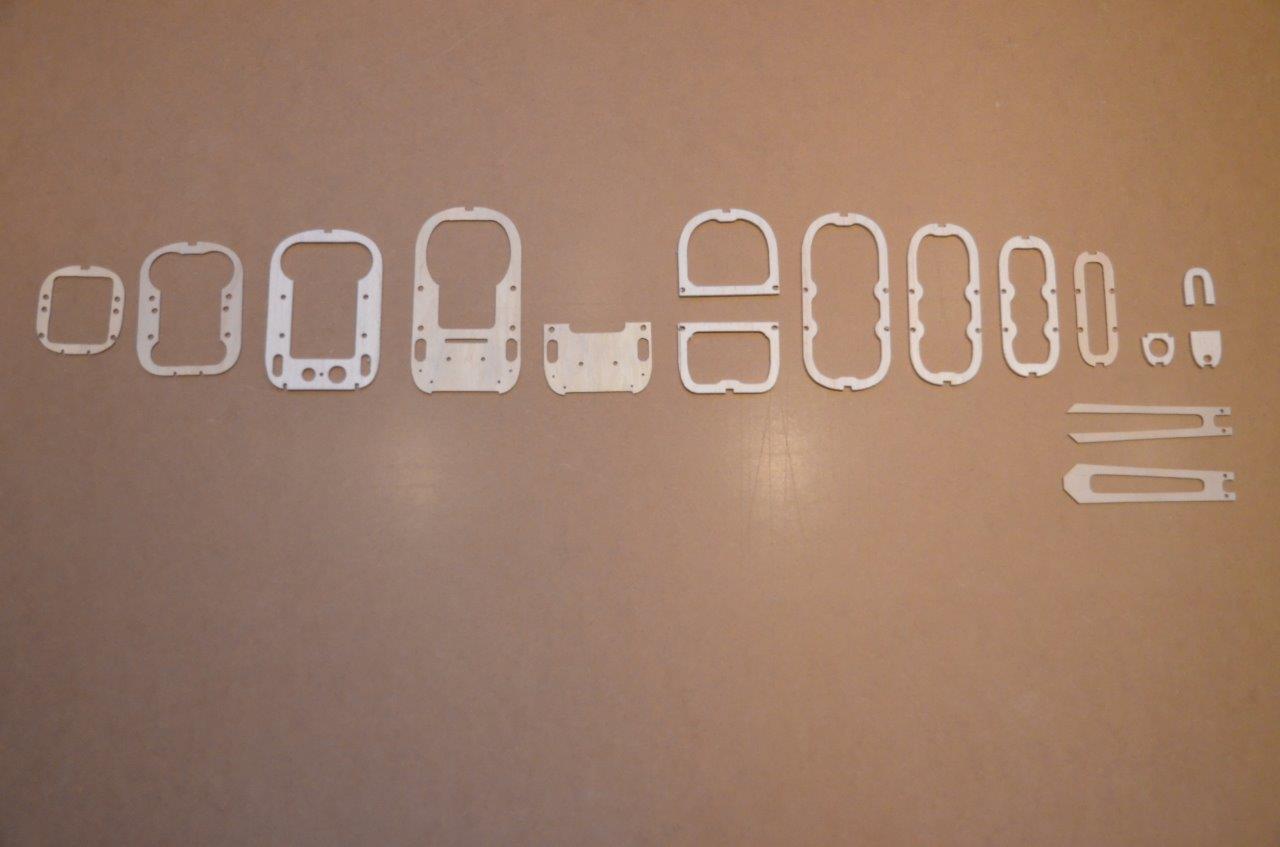 Two hours later, the motor and tail plane support from 2mm ply, the UC from 1,5mm ply and the rest of the formers from 3mm balsa are done. Strangely the 1,5mm ply goes very well but my dremel is struggling with the 2mm ply. I have to play a bit with cutting speed and acceleration to figure out what it works best.

Almost a real airplane. The basic fuselage is ready to receive the moulded balsa 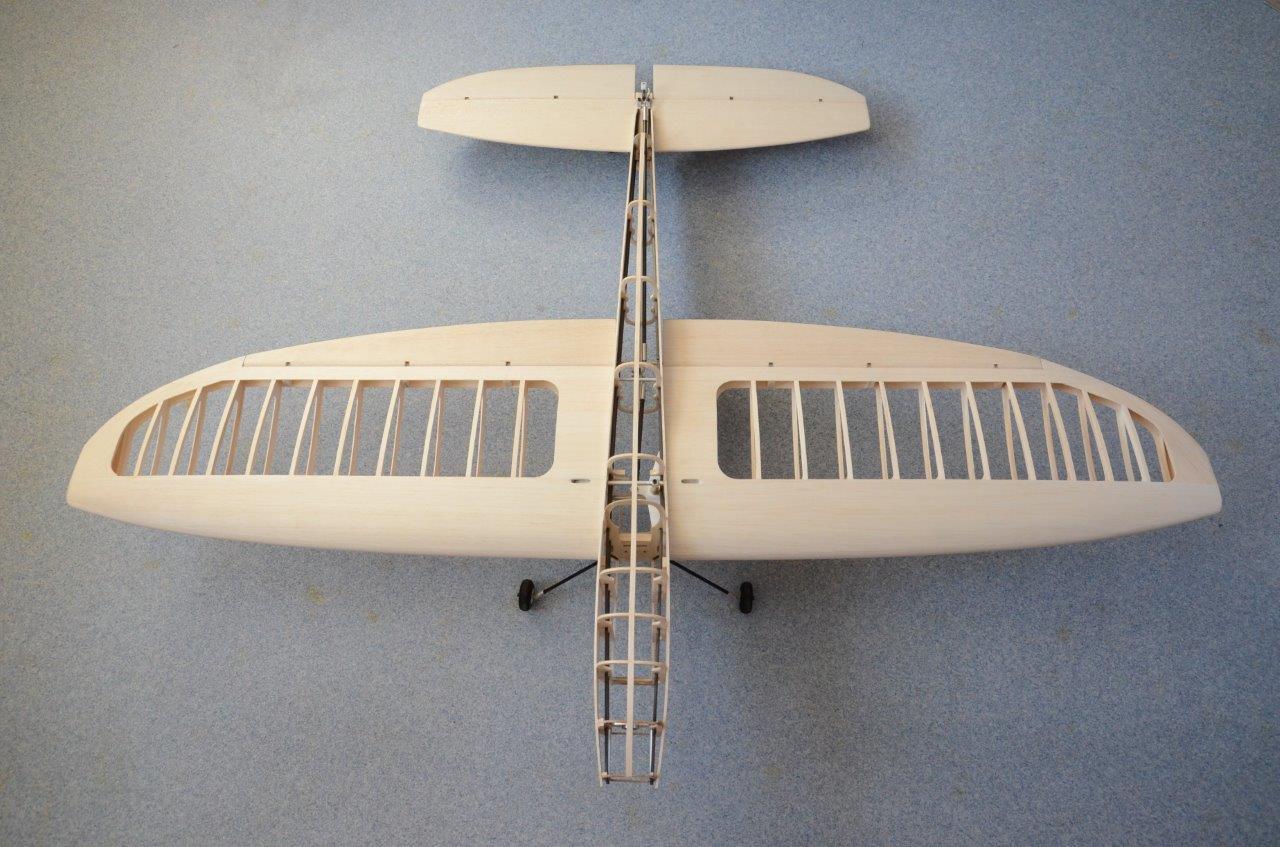 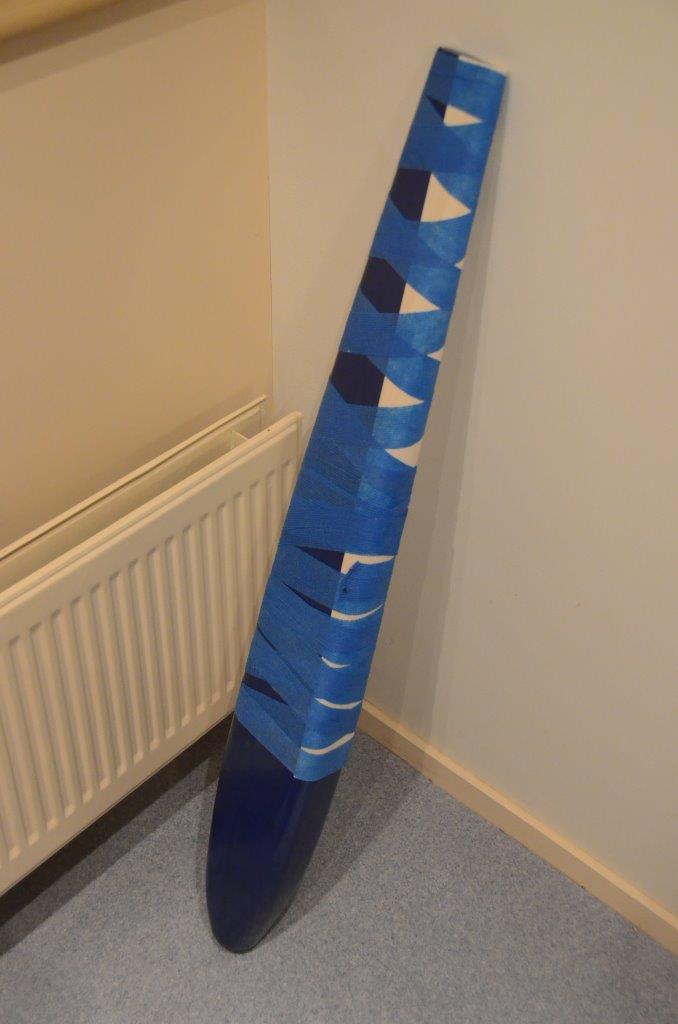 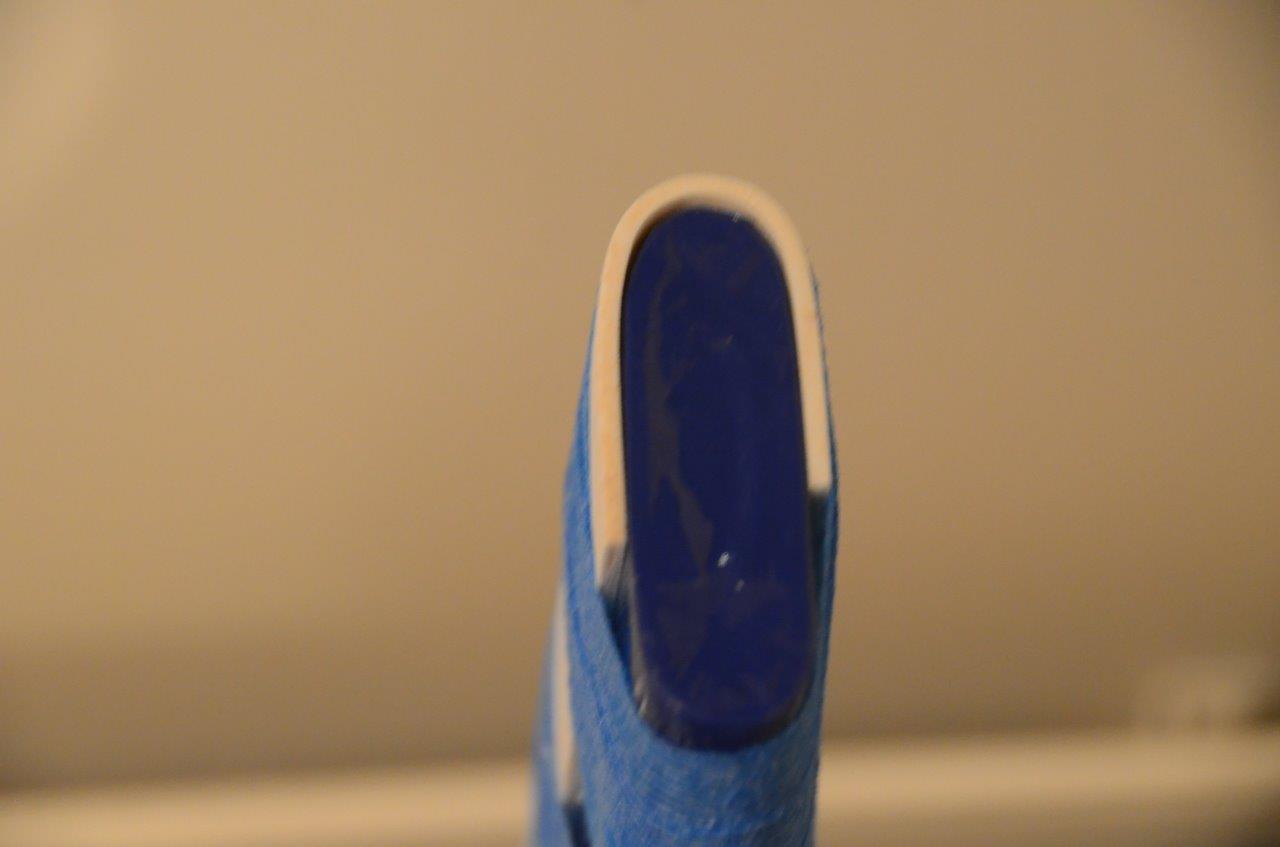 Detail work slowed me down this week. I needed a plywood edge to my air intake and cooling outlet slots in the battery hatch. For this purpose I used LibreCAD in combination with EstlCAM for the toolpaths. This drawing program comes very close to what I was used to do in ink and therefore easy to learn.
The intake edge reinforcement is 2mm wide in the drawing, in reality it is 1.8mm on all sides. Inside 18mm wide and 40mm tall. Symmetry is excellent so my router is in top shape. I guess my Dremel is wobbling 0.1 around when cutting plywood. 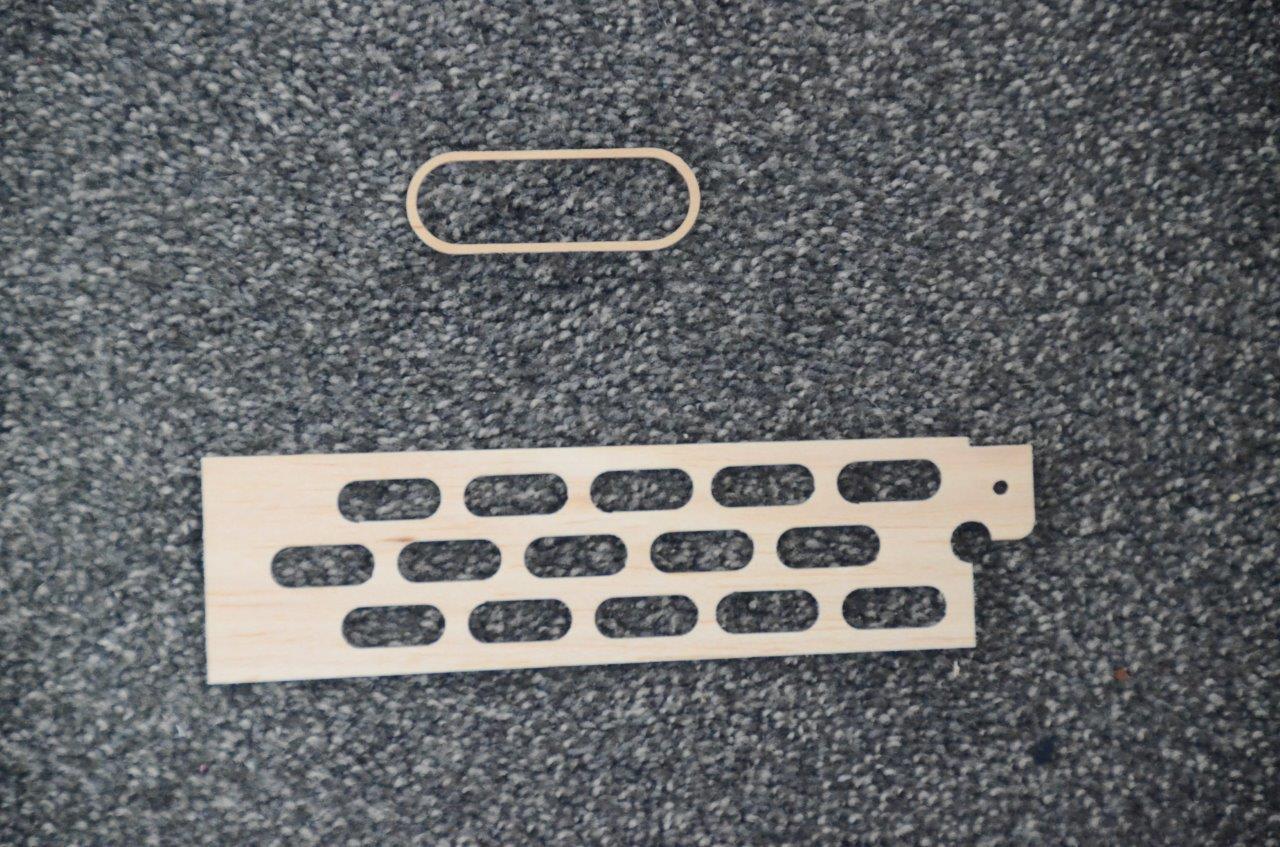 Bottom of the fuselage is ready, the wet formed sheeting and the hatches installed. 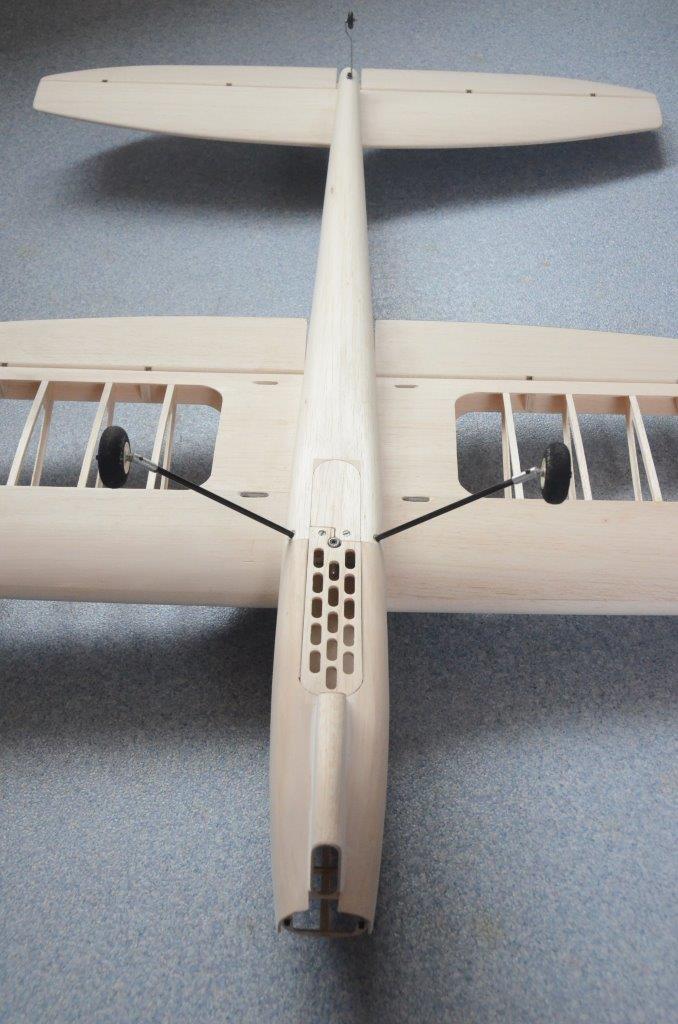 Having the mould available at 2,5mm smaller size than the actual fuselage helps a lot in getting the skin sheeting in place. This does not only save time but also weight. 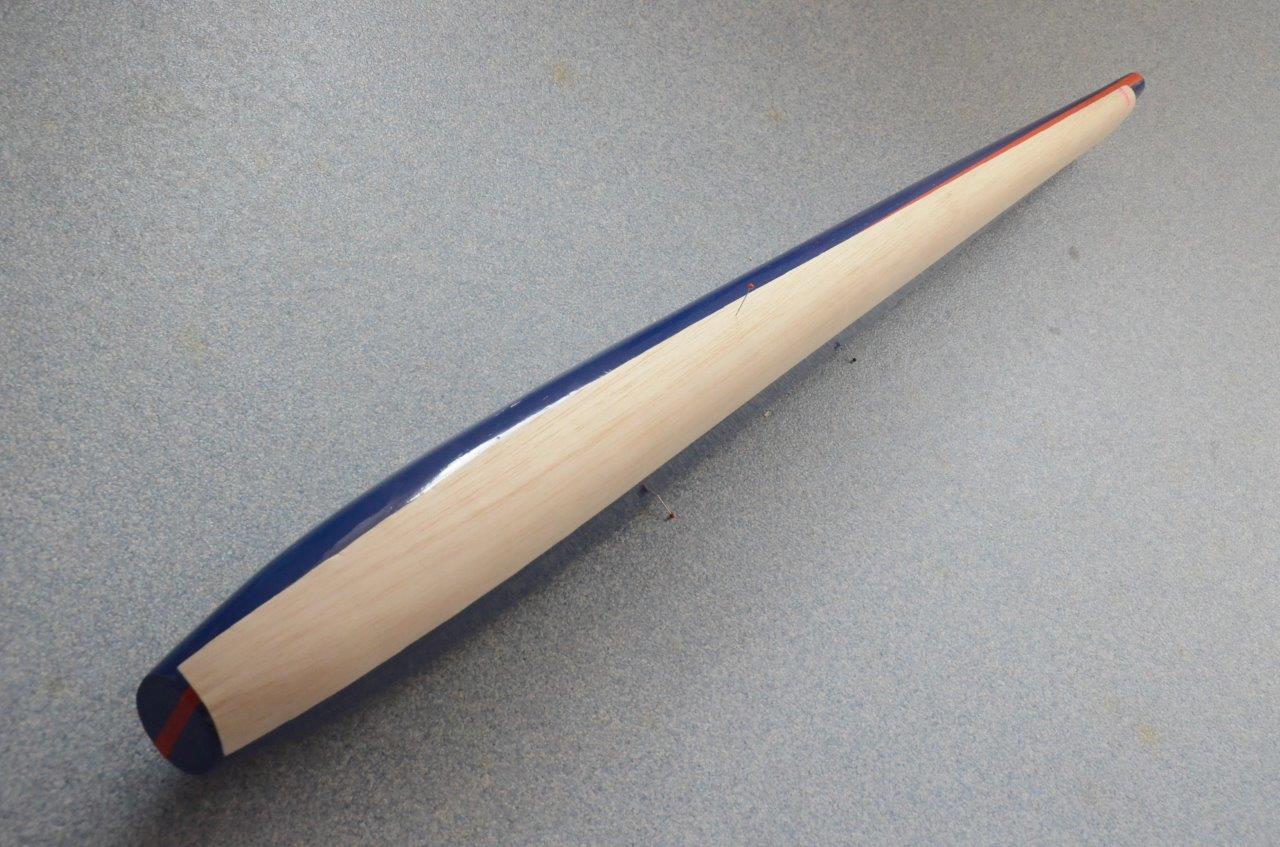 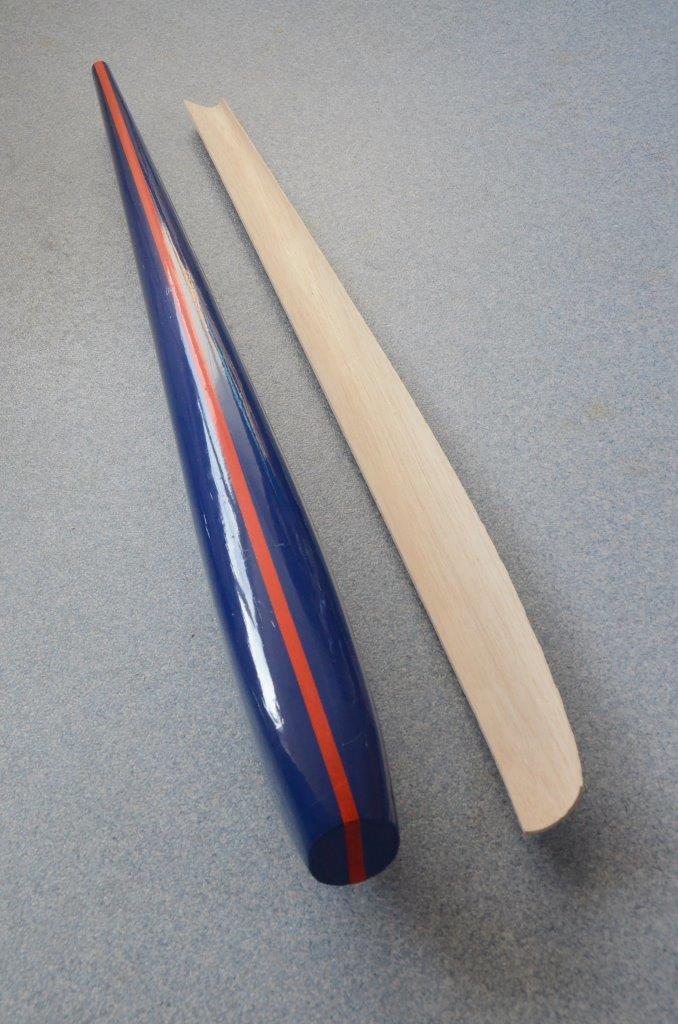 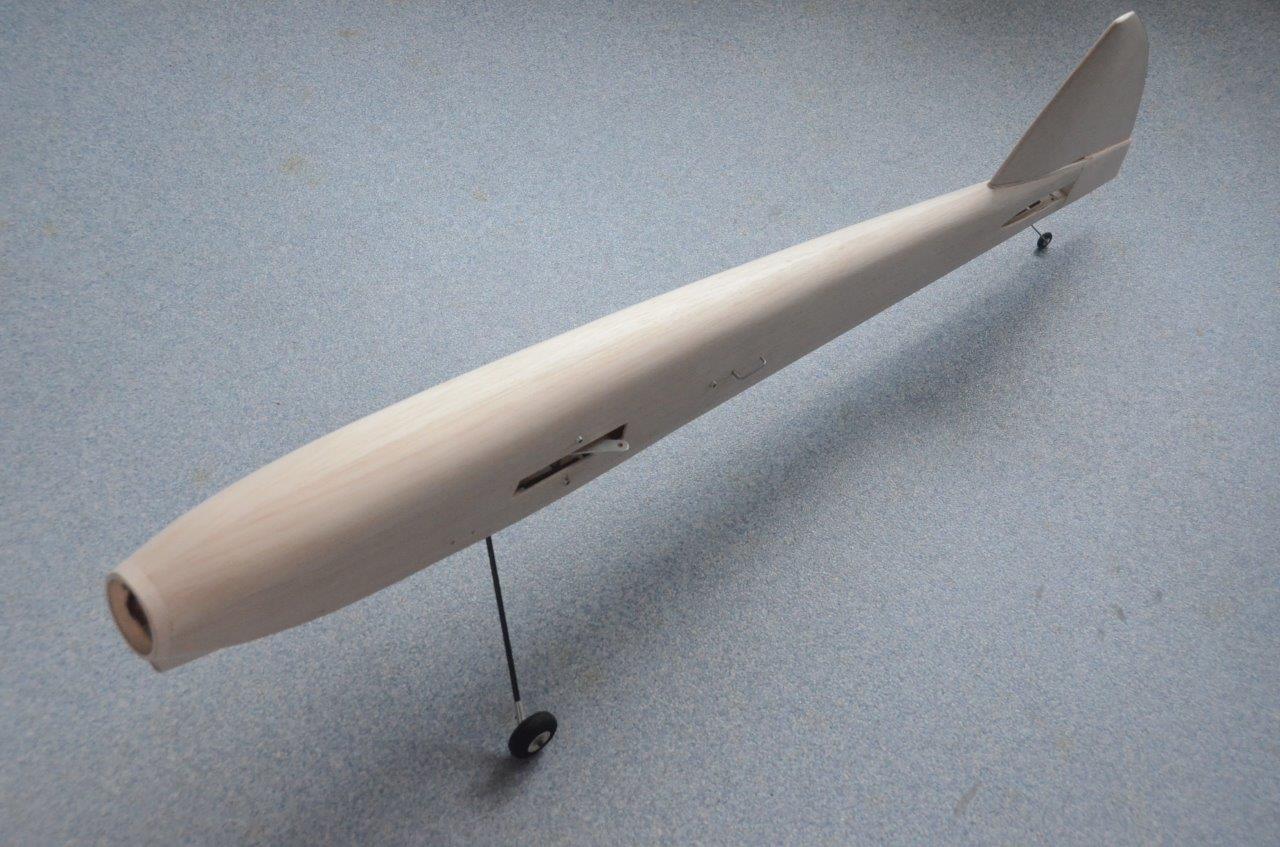 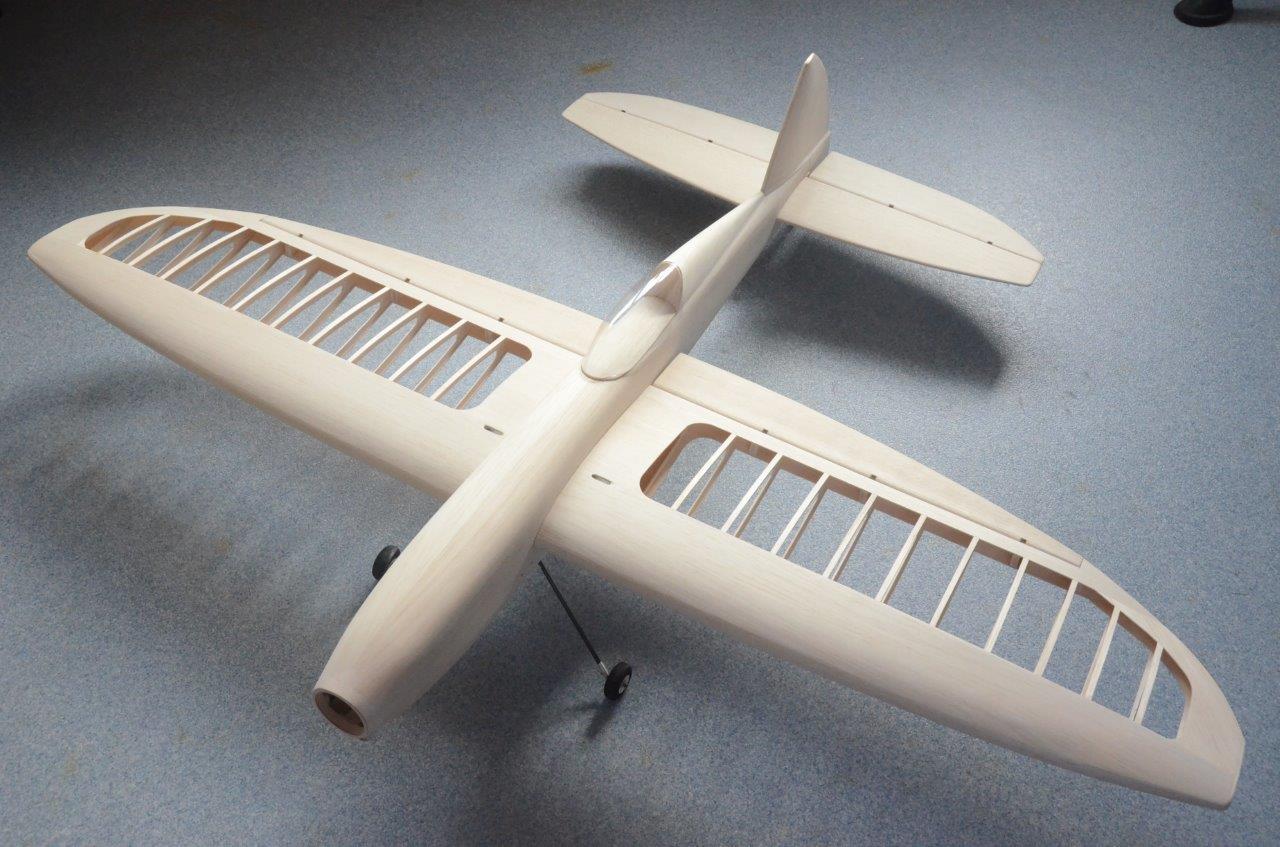 Ellipse 5.0.jpg1280×847 142 KB
This is a plane I could not have built without the help of CadCam, the elliptical wing, the tail plane support, the moulded fuselage are impssible to build with hand tools. Totally satisfied with the tooling and a real asset to my workshop.
This is the end of th build log, later I will post another picture of the painted plane but that may take some time.
4 Likes
RogerAndre April 27, 2016, 10:37pm #24

Really amazing! I hope you make more of them, so we can continue to be inspired.