So, this has turned into a bit of a project for me. I completed an 80% receiver and now I intend to do some engraving on them for my own collection. I figured I’d start with a few Colt clones which are unobtainium. An AR receiver, if you haven’t ever seen one, is quite an awkward object with no real flat surface to seat it against, so first I had to start with making a jig to retain the receiver for engraving.

A few hours in fusion 360 and I had a jig which should support the receiver properly for engraving:

The jig was printed, and looks like it will work: 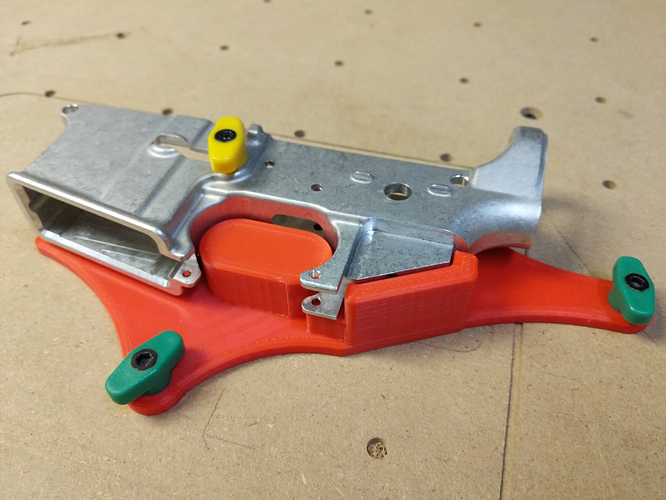 After just a few tiny shims, I was able to get it relatively flat:

But, it isn’t flat enough for engraving. This is when things are going to get difficult for me. I have to maintain a minimum .003" engraving depth, which means I can’t have surface deviation anywhere near that. By my measurements, I’m getting a surface deviation of .003", which is no good.

So I have a few options. I can make a grid using my dial indicator of the surface imperfections, and model that in Fusion 360 to account for the changes (I’ve never done this before but I think it can be done), or I can hit the entire side of the magwell with an end mill to flatten it out. I’d rather not do that, but if that’s my only option I may be forced to. I did a few passes on a scrap piece of aluminum to dial in the engraving, and it’s starting to look a little better. 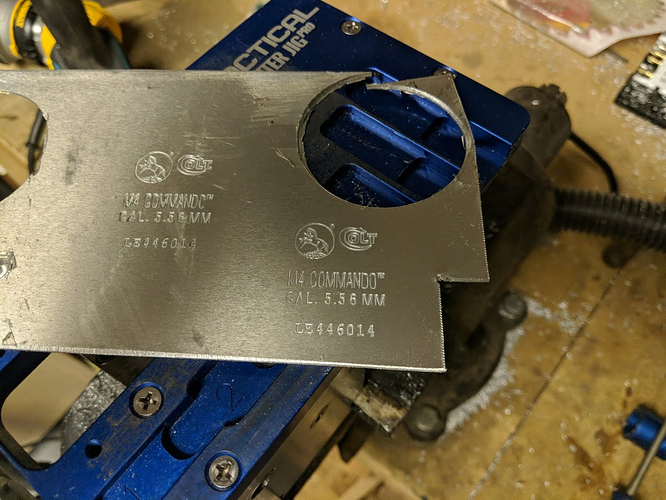 So, that’s how far I’ve gotten thus far. I’d love to hear some thoughts on how I could model this in 360 to account for the surface. I will say that I only roughly shimmed my jig, and I think I can get a little more of the angle out, but AR receiver forgings are known for having this issue. This is why they are very frequently done with CO2/Fiber lasers or diamond drags. Lasers never look right when it comes to the real deal, and diamond drags don’t engrave deep enough.

surface torque shouldn’t be too high with engraving, rather than trying to model a jig for such an irregular part, have you considered something like stiff modeling clay?

ETA:
sorry I misunderstood the problem to be leveling the part, but it appears the surface to engrave is not flat? please disregard.

You could try to use a CAM-package that allow surface mapping, Chilipeppr is one.
I haven’t done any of this myself but thought I would mention it. It is very common with milling PCB traces etc.

when I engraved my 80% lower I used Bcnc and did the auto-level function before the engrave. this worked great.

did a few practice runs on scrap to get the hang of the program as I only had one shot at getting it right.

Love your jig. can I ask that you share that file? I would really like to print one and see how it fits. (everyone that sees my lower wants theirs engraved but I have not done any others yet due to the time it took to do mine).

Sure, I’ll upload the jig to Thingiverse this evening. It sounds like we’re taking similar paths to get this done.

I’ve honestly never heard of bcnc, but a quick search reveals it’s some sort of software with an integrated probe? I’ll have to check it out this evening as well. What depth/tool did you use for engraving?

I used a cheap v-bit I got off Alibaba express. and set the depth at around .004

Bcnc-
it is a sender program that use’s GRBL so you have no need to flash or even change your GRBL settings.

here is the link to the program https://github.com/vlachoudis/bCNC/wiki19

here is a direct link to the autolevel feature https://github.com/vlachoudis/bCNC/wiki/AutoLevel16

I like that it is a local install like UGS and it has so many more features.

Forgive me, since I’m at the office I can’t look into it too deeply. How does the probe system work?

here is a video of the program in action.
https://www.youtube.com/watch?v=Z59BkvBOx5A

and here is a link from an older post on the subject.

yes it will work with the X-Controller. that is what I have. I personally liked Bcnc as the program runs from the local machine and although chilipeppr works nice it is browser based and I never liked some of the limitations of the browser, i.e. larger file support. when I did the AR which is aluminum I did not need to use the tape method. but I did see a video in which a person used the aluminum tape to touch off of. just ground the tape with one wire and hook the other to the bit "sam…

yes, that’s correct. The receiver originates as a bare forging. The forging process causes a minute uneven surface. If you look at the video I posted, you can see the surface is all over with little consistency.

Awesome. I’ve had a few friends want me to do the engraving on theirs for them

I cannot wait to try this jig, I have been wanting to engrave my AR for ages!

Sorry I didn’t get it up last night (don’t tell my wife). It’s uploaded and ready to go. On my jig I set the tolerances on the pins a little too low, and it was (too) tight. I added a bit more tolerance so the receiver should locate better and not get hung up. It is important to mention this is not a production jig, I made everything very loose primarily because the point of the jig is to get the receiver flat, not for a precise X/Y location. The contact surfaces are designed so both A1 and A2 receivers will seat properly.

This is a quick jig i made to hold an AR15 level for engraving. It has been designed with mounting points 75mm on center to match an X-Carve CNC wasteboard. Two of the M5 thumbscrews are used to secure the jig, the third M5 thumbscrew goes through...

Use a 60 degree diamond drag bit and the flatness is less of an issue. They are amazing for something like this. Good luck!

Got my first receiver done. Came out okay. Forged 7075 is way harder than 6061. My test cuts were sharp and crisp in 6061 plate, my first receiver cut was a little rough. I did finally get it dialed in towards the end. Happy with the first one. I think I went a little too deep, I’ll cut that in half on the next one. 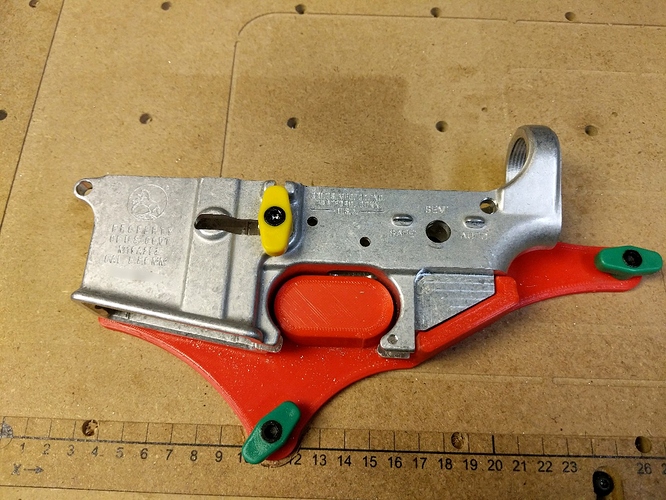 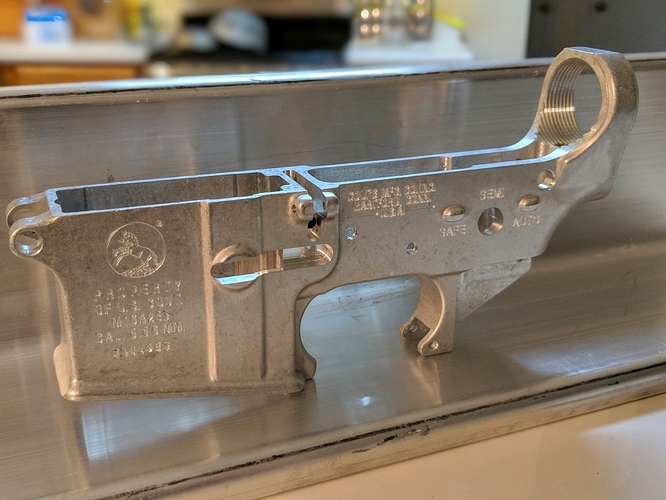 How does Autoleveller do its levelling?

This is quite a big question, but in brief: There is an initial
process of probing the material in several places. It then uses
these probed values to adjust the Z element through bi-linear
interpolation. The calculations or values for Z are used to
transform your original unlevelled GCode file into a levelled
GCode file.

What is the difference between the free Autoleveller/AE and the
member versions?

Pretty cheap for this function, in my opinion.

Thanks Jim. It says it’s compatible with Mach 3 and LinuxCNC, but never mentions Grbl. Later, it says it works with any gcode, a little confusing. I’ll look into it.

I blasted the receiver so I could see the engraving a little better, without the tool mark reflections. Ended up coming out pretty good. I need to reduce the cut depth by half, and decrease the selector text size, but this is acceptable. Proof of concept! 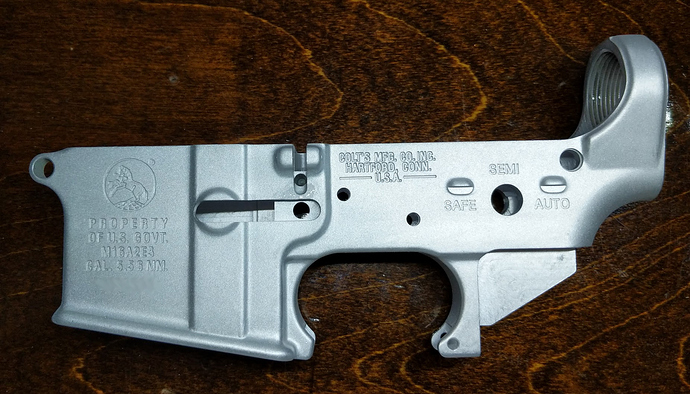 @Pyrex thanks for the share. I think I will really get some use out of the jig you made. I now I am inspired to try to make one for the AR-10 as well.

I may be wrong, but I think an AR10 receiver might fit this jig. They use the same FCG locations, only the magwell is extended further forward. The rear buffer lug is further back, but my jig is design to not interfere there. If you snapped the front locator pin off the jig, it may fit. I just can’t recall if the mag release hole is in the same location. That’s what matters.