Does anybody know if it is possible to carve small letters or symbols into something as small as a pen? I turn pens on a lathe and sell them as a business and I am really hoping to be able to engrave my pens to make them more personal and unique but don’t know how to go about doing this. Thank you all in advance!

In theory yes, it would be easier with a 4th axis but I think if you design a shape in VCarve as a 3d base of a half round then layer what you want to engrave onto the model it should carve onto the pen - I was wanting to use it for this as well. I am going to make a special jig to hold the pen blank as well. As for using straight out of Easle, you could possibly do a flat on the pen blank and engrave the logo design or name then go over it with some cast resin and refinish the blank. 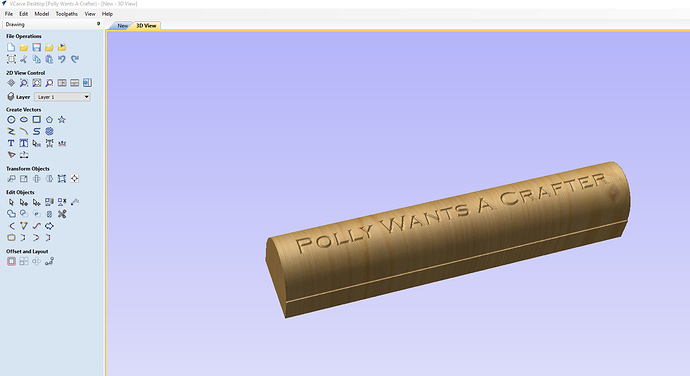 The best solution would be a 4th axis - but also the most difficult and expensive.

If the text is small enough to cover only a small fraction of the pens circumference you can use surface scanning and engraving without rotating the pen:

Small text should be relatively simple with a spring loaded engraving bit. The Spring allows the bit to follow the contours of curved surfaces. The larger the pen barrel (and the less curve there is) should allow for larger text.

If you cannot find one, let me know and I’ll find the brand of the one I have.

Attaching a laser diode on your X-Carve would be the easiest way to engrave on a pen. The focal point of a laser would be more tolerant of the curvature then using a spindle, but it would depend on the size of the engraving and how far you want it to wrap around the pen’s surface.

J Tech Photonics, Inc. has a wide selection of laser and driver combo kits for sale. Click here to order one of our reliable kits today.

An image to gcode program like our PicLaser could be used to create the files for your custom text engravings.

Thank you, Fellow X-carvers! These ideas are very helpful and I look forward to using them!

Adam,
did you ever follow through on engraving Pens?
I too turn pens and recently had someone ask me if it was possible to use the X-Carve to engrave them.

My thoughts were to engrave the blank to a specific depth (depending upon the pen being turned), then fill the engraving with casting acrylic (colored/tinted) and then drill and turn the blank…

It would almost be like turning an inlay pen.

When I get around to it I will post pictures