anyone ever tried to do this yet? Is it possible if you go very slow and little depths at a time?

Id imagine youd destroy your cutting bit very very very fast because rock is just incredibly abrasive… They probably make specialty bits for cutting stone. You may want to look into that.

I have before with an SO1. Went real slow and used a diamond bit with water to cool.

Yes I did both Marble and Slate tiles without a wet system. Worked very well indeed on both. 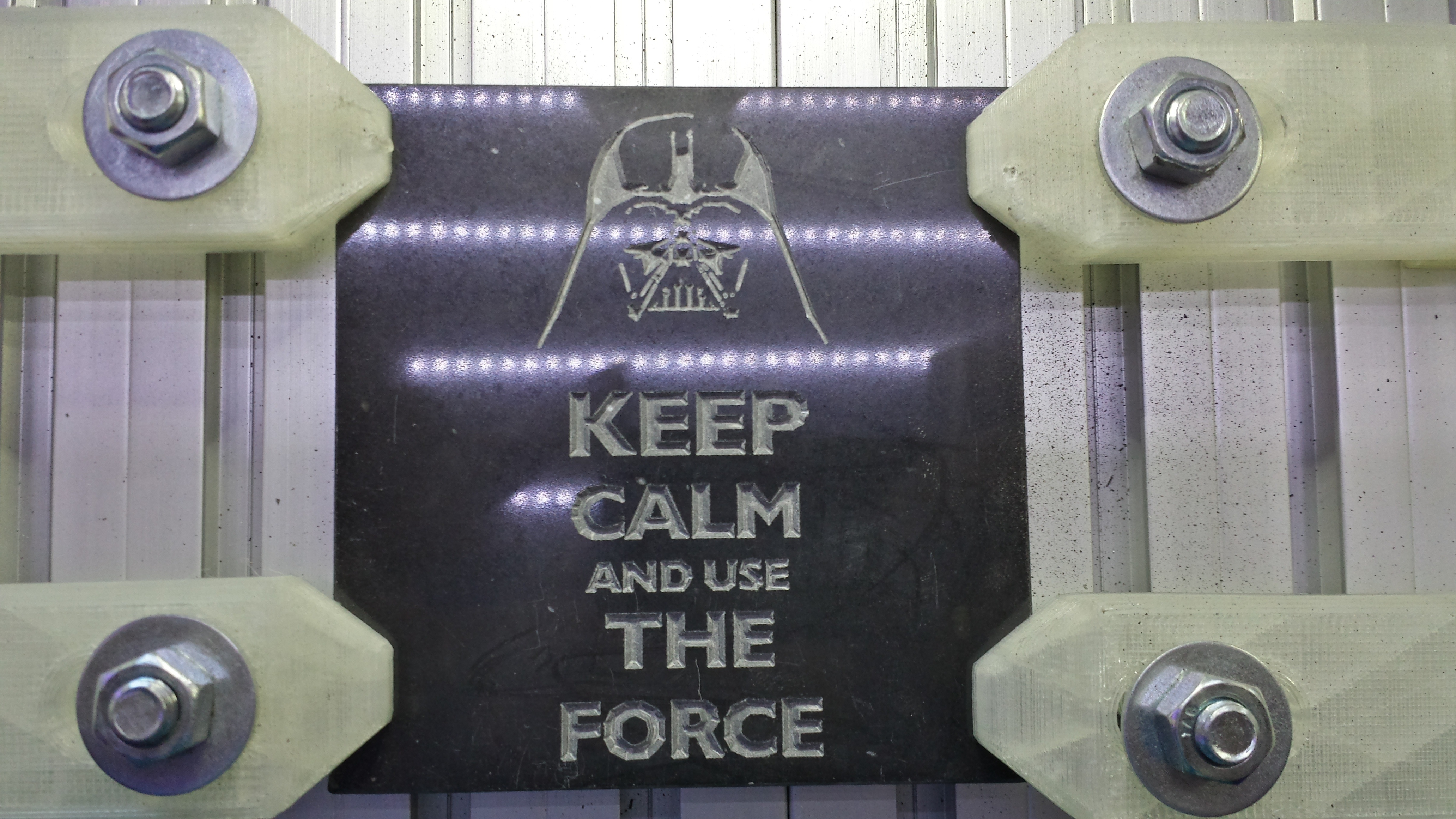 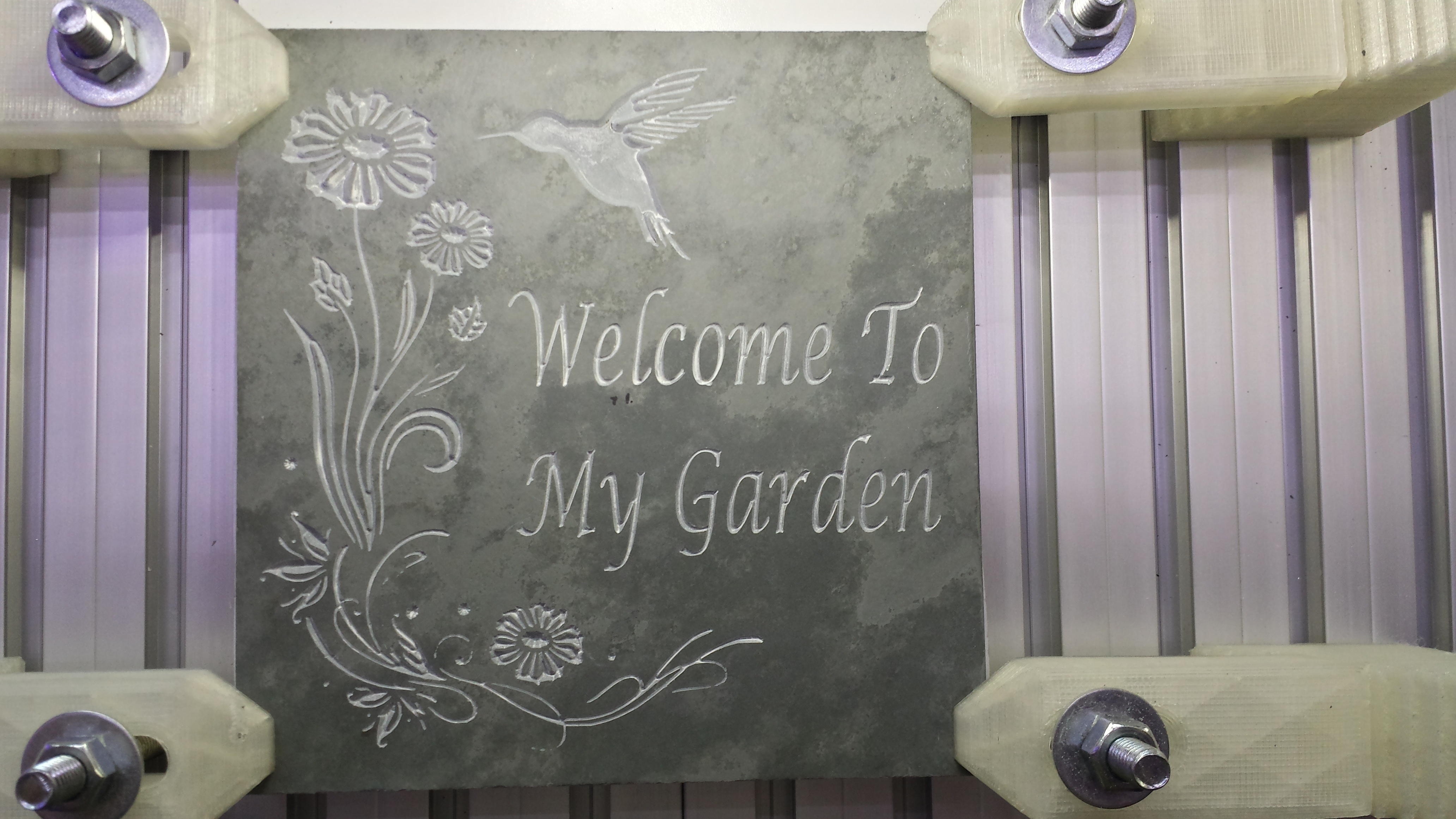 I have some bits I just got in for more stone work. Will be working in granite and marble shortly. The above were done on Marble and Slate and we done DRY and with the same bit from one to the other. Each sign took about 6 or so hours. maybe a bit longer on the larger one with the humming bird.

Thanks. I am only wanting to do very small inlays and such for my knife handles, so will give it a try when my machine arrives. What type of bits did you use?

For the soft stones like the marble and slate I have been using just a normal carbide V carve bit much like Inventables sells for PCB engraving. Pretty much any sort of engraving bit will work in those stones if you allow enough time for the shallow DOC it needs. I think my feeds have been around 50-75mmM and DOC is between .1 and .12MM. For the harder stuff like granite I use a PCD bit. They are super expensive but made for the job and nothing out there can touch them for performance in hard stones. I should have some tests pics up soon and a personal project up shortly from the granite engraving.

Just thought you guys might like seeing that granite can be done with a Shapeoko or X Carve. 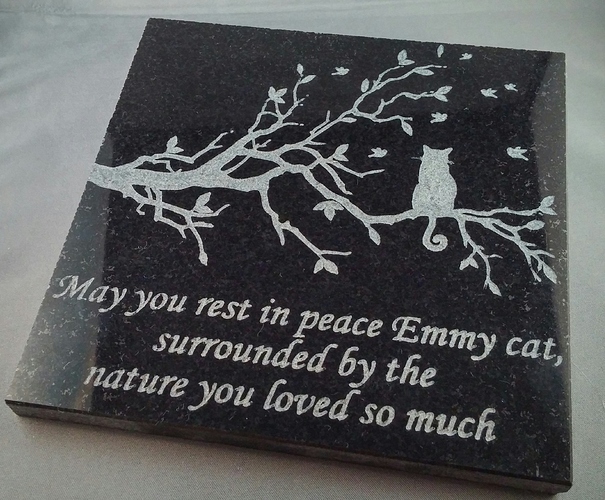 Do you need a cutting fluid? Or do you cut them dry?

I cut them dry without any issues. I would guess in the long term the endmill is far better off cutting wet but I went dry for the first 3 tests. Working on a wet system for longer term uses. Already have orders for more memorial stones coming in after posting on FB.

I would start off with some of the cheaper PCD end mills from china as a starting point. I did on my first runs and i still use them of smaller projects. i now use a few different ones from USA tool makers but they run$15-375 each so are not cheap to play with. You can get a started set from China for around $55 for 2. I used these but they are not always in stockk and they seem to take the SLOW boat here from China. http://www.ebay.com/itm/3PCs-Set-6MM-60-0-2mm-Polycrystalline-PCD-Diamond-CNC-router-bit-Granite-Stone-/201536001934?hash=item2eec7b578e:g:pBkAAOSwZQxW2-IK

I grabbed on old Marble cutting board and used a replaceable tip V Bit (and V Carve) to engrave some text and images into it. Not sure about other stones, but marble is about as hard to cut as MDF - in other words, it cuts really well, leaves a nice edge and doesn’t appear to damage the tool at all.

Below is one image, immediately after I finished cutting (you’ll notice how little dust there is) and the other is after I filled the cut with black resin. 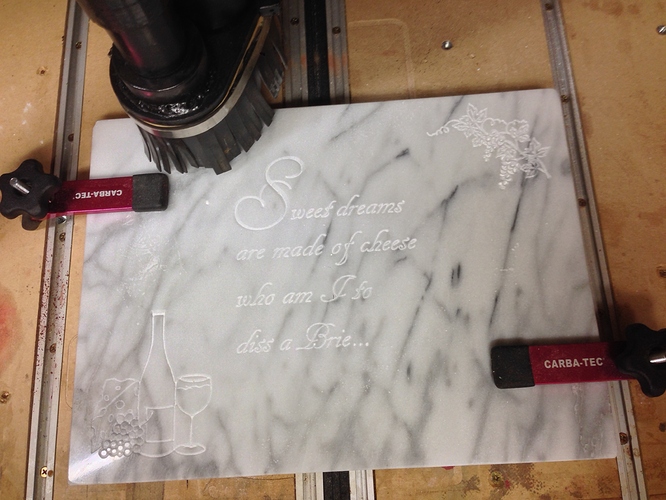 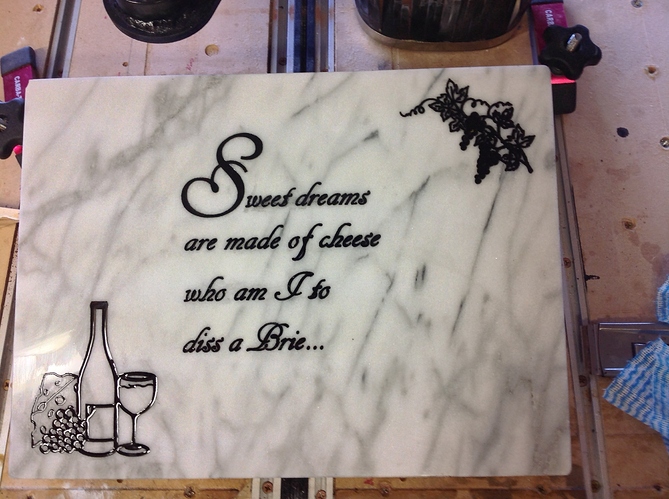 David, I know it has been a while since you did this one but would you be willing to explain how you did the resin work? I did several searches on this topic and have not found a clear answer on how to do this with marble as you did. Thanks in advance!

This is simply two part resin with some tinting added to it. I mixed it and then poured it in a thin stream to roughly fill the engraved areas. Once everything was filled, I used a piece of scrap to wipe the excess resin off the surface (you’ll clean up the areas between the letters more later in the process).

This resulted in the filled areas being slightly lower than the surrounding stone which is a good thing because the resin dries “smoother” or shinier that way.

I also used a butane torch (you’ll find how to do this online) to remove bubbles from the surface of the resin. When it was 99% cured, I used a rag and some solvent to wipe clean the areas between the letters and other areas where there was resin still smeared on the surface.

Hope that helps. Feel free to ask if this wasn’t as clear as it should be…

hello,
for cnc stone engravings you have to use Widia tools for marble and PCD tools for granite
you find stone tools here: cnc engraving tools

What PCD bit have you been using? Size and Brand?