I’m working a bar top for a friend of mine and I have the epoxy for some inlay all done. My issue is that the green epoxy (I mixed some latex paint with super glaze epoxy) looks great after I sanded it, but stains appear after I wipe it down with water or mineral spirits. Has anyone h 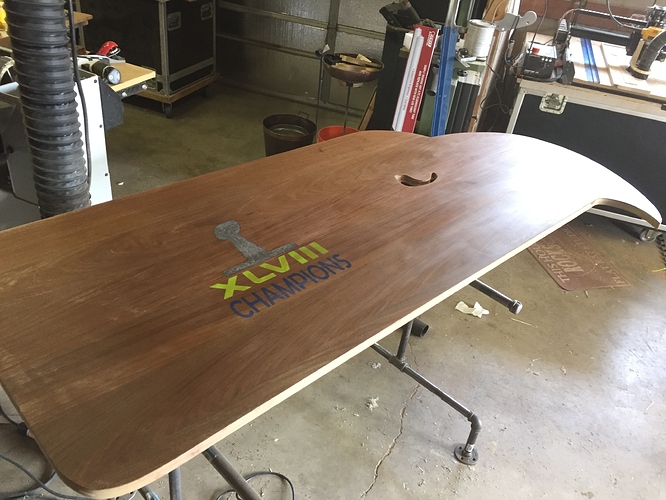 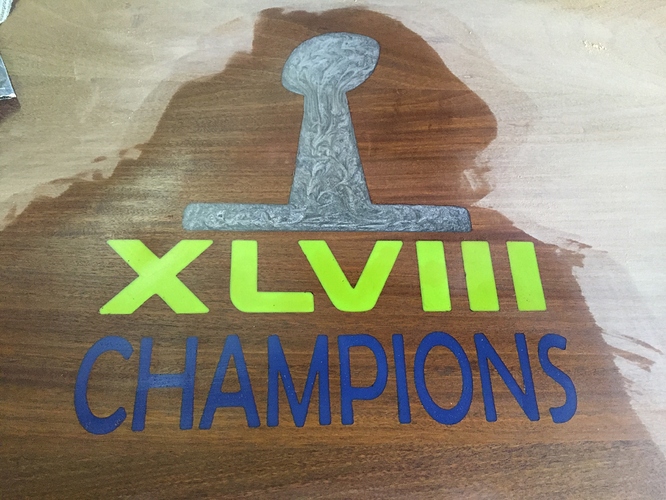 can you elaborate on the stains or take a close up picture? I can’t really see what is going on there.

The close up picture on the bottom is right after I sanded it the first time, came out great. The top picture is after I wiped down the top and the stains in the green epoxy appeared. I sanded it 4 times, each time it would look fine and then the stains appear. I can’t get a close up until tonight, but if you click on the top picture you will see the stains

Has anyone had to remove epoxy?

Yep, I did a rwo part epoxy surface and it did the same, scraped and sanded it off and reapplied it and all was good.

I suspect I may have been fractionally off with the mixing ratios.

Why would you use water based paint with epoxy? is this something you have done successfully before?

Is it refraction causing the wood underneath to show through the translucent epoxy in places?

If I had to fix it, I would use my machine to cut the letters out of 3/4 birch ply and make a router template. Then double stick tape it down and use a straight bit with a bearing on the shank to route the old epoxy out.

Next, paint inside the letters with silver or white before refilling with epoxy.

my local Hobby Lobby sells tints for resin and epoxy if ever in a pinch.

I have used latex before with no problems, this paint in particular, are custom Seahawk colors that I used on another project so I used that. Good point, about the tints, thanks.

That is an excellent idea, I was not excited about having to hog it out free hand, and I have a Hobby lobby nearby so I will check that out after work.

at my local, there is some in the plastic model paint section where they sell Alumalite urethane resin. There is also some down the way in the aisle where they stock the clear casting resins. I think it is the sculpting supplies aisle.

Just make sure the epoxy is completely cured before routing or you could have a god-awful mess on your hands. I’d probably lay a towel over it and make a few passes with an iron on low heat or lay a heating pad over it for a bit just to make sure.

protect the rest of the surface in case you hit a pocket of wet paint.

Yes, I got every little nook and cranny. The sealer made the wood darker, and I think that is bleeding through.

Epoxy can be super picky about what you put in it. Use epoxy pigment. I get mine from fiberglass Florida. Also fibreglast is a good source. Mix the epoxy first thoroughly then ad the pigment. Also when mixing be careful to scrape the walls of your mixing bucket. When you pour don’t scrape anything in case there is unmixed product. Once poured you can carefully heat the surface with a heat gun or torch to clear out air bubbles.