Extremely frustrated with my machine

I’m sorry to keep posting, but I think It’s actually the x that has issues. I just cut the heart sideways and the sides were fine it was the top that had issues (the dip in the top of the heart).

Set Screws are ok. I’m tweaking the pot switch now to find something that works. I think I’m getting there.

Again; If you look at the picture, all lines joining together at the end. There is no double line.
If you have low power problem or set screw slippage, you must have double line. Bit never can find same path back again.
Because simply you skip steps.
Tells me only one think; your spindle is not solid. Something loose, either Z axis wheels or X axis wheels. I can tell Y axis is not failing.
If your wheels have thick washer between two bearings, you must find very thin washers and replace them.

I had nearly identical circles when I first started using my machine ( same angle and location of errors). Belts and pot adjustment sorted it out.

Have you secured the ends of your belts with either wire ties or heat shrink? That is specifically what I missed and caused most of my problems.

I swore up and down that I had everything right.

Yes, thanks for the correction. BELTS. I forgot. If X axis belt is loose, could be the cause for cross grain cutting.

I think this very well is his issue. This picture was one of my tests when getting the problem sorted and you can see the angle of the lopsided circle is very similar. 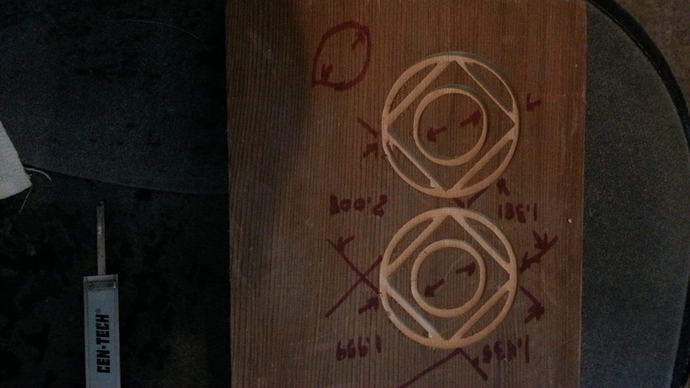 Exactly the same issue. Circle is closed, all lines matched, but it’s not rounded.

So it was a belt issue? My belts are zipped.

I'm finishing up the assembly of my X-Carve, and have no idea what kind of tension I should have on the belts. I picked up a little fish scale on Amazon and made the following procedure: On belt of concern, run the carriage or gantry all the way to the "secure" side of the belt (the non-adjusting end). Zero scale/tension gauge and hook under belt in middle of belt. With one hand holding a small ruler, pull up with the scale until the belt has been pulled up to the 1 inch mark, then read the …

And this link for Wheel problems.

For me, it was. They weren’t tight enough. I used a cheap fish scale and set to 3 lbs pulling the belt up 1" from the middle per suggestions from RobertA_Rieke . Search the forum for his advice posts. It got me sorted.

@AndrewWatkins If it helps, I just put out another X-Carve tip video. This one is on calibrating the stepper motors, so you can get it dialed in just a little bit more if you want.

Hi Andrew, I was having the same issue. Of course , Id checked everything and last night I checked the eccentric nuts and they were a little tight, x and y ones, I loose them up a little and that fixed the problem. I was getting frustrated too! I hope that helps in yours too.

Little tip even if you use Loctite. Wrap a thin strip of tape around the pulleys covering the set screw holes. It stops them falling out and being lost if they get loose.

If you use a patterned tape (or draw stripes on it) it also makes it easier to see movements while machining.

Once I got my ecconcentric nuts set with blue loctite to where the machine was running smoothly, I put m5 nylon lock nuts over the top of them. Cheap at the Orange Depot and I’ve not had a v-wheel issue since.

Thanks, I’ll give this a try!

I’m really getting there. Cut some good stuff then shot for the moon and did an inlay test. Didn’t come out as well as I’d like. Some gaps here and there, but not bad considering I wasn’t cutting a couple days ago.

My fish scale is out for delivery. I will test the tension of my belts tonight. After that, I’m hoping to be able to get inlays to cut nicely!

How do you know if they are getting enough juice?