I’ve been using a spreadsheet I found here in the forums to do some feed rate computations for my Dewalt and realizing that, in my first days, I was definitely running the bits at too high RPM and too slow for the feed rate. I was getting fine sawdust. Now that I’m decreasing RPMs and increasing feed rates, I’m getting what I assume to be the lovely chips people describe. It’s also taking far less time to cut my various test pieces.

One thing I’ve been working on as a project requires some facing to thin down the wood to the proper thickness. I was using the 1/8th flat end mill I already had in the collet to do the facing and the initial cutting. I realized later that I had a 1/4 flat end mill I could use for the facing portion to speed things up. I did some calculations and came up with what seemed a rather high feed rate (285 perhaps?), but I decided to see what happened. I put it in Fusion 360 as in/min and it comes back with the metric calculation (since I default to metric). To my surprise, the actual rate of movement appears to be much slower than the former 1/8th end mill. The last cut uses a 1/16th end mill and I had kept the 1/8th feed rate settings… it appears to be insanely fast.

So… I assume the feed rate / surface speed relative to mill diameter represents amount of material CUT per minute rather than being the raw speed of the X, Y movement of the spindle? Or am I misreading something?

But you are 100% correct in realizing that with the Dewalt 611 a speed setting of 1 or 2 is very fast for most typical bits and material the X-Carve will use.

The spreadsheet you are using (it may be the one I created) will recommend the optimal feedrate for an optimal chipload based on the bit size, number of flutes and the material being cut. Since the 611 has a very limited range of RPM’s with the lowest at about 16,000 the spreadsheet will sometimes recommend feedrates that are way to high for the X-Carve. So all it is really telling you is that for that bit and that RPM for that material you are not going to have an optimal chip load. Not the end of the world, You may be wearing the bit out a bit faster than normal or it may be getting bit hotter that you would like, but it can still make a good cut.

In this case, I am facing a piece which just involves a lot of slow back and forth over span of about 4x6 inches. So, yes, I get the dampening of curves, etc., and that speeds are non-linear. What surprised me, though, was that Fusion 360 is telling it something like 7 m/min for the 1/4" end mill and closer to 3 m/min for the 1/8" end mill, but the 1/4" is traveling much slower than the 1/8" one did doing the same task at half the speed. So it’s not a case of me asking for too much speed and the machine topping out, but rather two different end mill sizes behaving, in terms of travel speed while cutting, opposite of what I expected.

Am I describing that better than before?

Regarding the spreadsheet - very possibly it was yours that I downloaded. The chart in it starts with 0.125 end mills. Any chance of getting the data to update this for 1/16th and possibly even 1/32nd end mills? I took a wild stab at the speed for my 1/16th since, as I described above, Fusion 360 sends the machine FLYING on 1/16th when the settings were precisely the same as the 1/8th.

Perhaps I am mistaken. I thought I had read in a few places that chips were the goal and not fine sawdust.

Anyone want to correct either of us on this one? What Now: My CNC Won't Go Slow Enough or Fast Enough? - CNCCookbook: Be A...

It takes a complex bunch of math to properly calculate Feeds and Speeds under all conditions and to get anywhere close to good answers.  There is a whole lot more to it than the basic equations everyone learns that claim to relate surface speed,...

The link that @AllenMassey linked to has some good information, I recommend reading that. Just to get the answer in one of these forums though, here’s a summary:

When the bit is moving, there will always be friction, and thus, heat. When cutting a proper chip or shaving, most of the heat gets transferred from the bit and the edge of the material into the chip. When you’re RPM’s are too high, or you are moving too slowly, your bit and the material start to retain heat. If you’ve ever touched a bit right after it finished a cut and it was hot to the touch, you were going too fast (RPM’s) and/or going too slow (feed rate) for the material. Dust doesn’t remove the heat nearly as well, and is a LOT messier than chips or shavings.

Heat is the enemy to your bit. As they get hot, the sharp edges become softer and lose their sharpness, causing them to scrape the material instead of cutting it. This not only gives you a crappy edge, but it increases the friction by a large factor and makes it MUCH easier to heat the bit up to a dangerous temperature.

Heat is also the enemy to your material. If it’s wood, you’ll get burn marks. If it’s plastic or metal, it’ll melt and then re-stick to the material or to a cooler part of the bit. I can tell you from experience that removing plastic that’s melted inside the contours of a bit is both difficult and dangerous, since the dulled edges are still sharp enough to cut you. I can also tell you from experience that you can’t really remove aluminum that’s melted and formed inside the contour of a bit. Might as well throw it away.

With the NEMA 17 and NEMA 23 motors and a decent spindle, you should not have any problem driving the bit through material. You may not be able to match the chiploads that big CNC’s can get just because the machine isn’t heavy enough and has more play, but it’s reasonable to shoot for 1/2 to 3/4 of the “published” chip load for each bit. For instance, if manufacturer A says bit B should have a chipload of .008" in a hard wood, run your calculations for .004" chipload, do a test cut, then try it again for .005" or .006".

Long story short, fine dust is bad and shavings are good. Your bits will last a LOT longer, and you’ll get much better cuts because the bits don’t dull because of overheating from unnecessary rubbing. The only exception I can think of is MDF, which is nothing glued up dust and rarely seems to make chips that stay intact long enough to be measured with calipers…

Your wonderfully extensive response is fantastic and highly appreciated.

I’ll include a photo here of the chips I was getting last night on some maple I was using. Not sure if they are ideal, but they definitely weren’t dust. 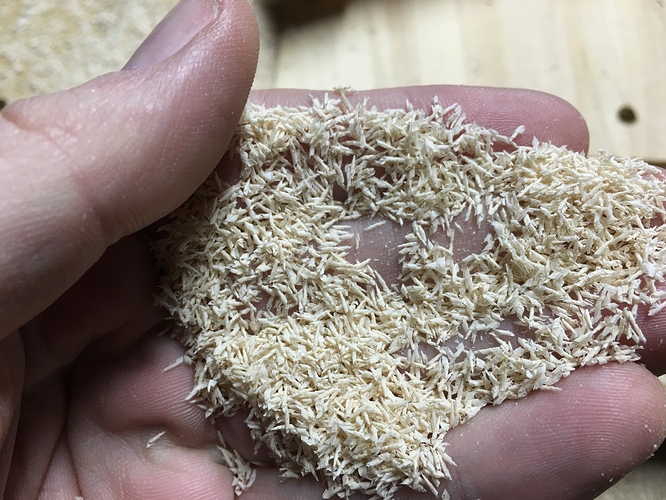 Those are the kind of chips you are looking for.

Those are the kind of chips you are looking for.

Read to myself in an Obi Wan voice…

Allen
I was looking at your Spreadsheet and was wondering if you could update it to include
1/16 and 1/32 bits that are fish tail ends?

I will need to find good chip load data for the tiny bits before I can add it to the spreadsheet. As a general rule of thumb the smaller the diameter the faster the RPM. So with the crazy fast Dewalt 611 you might be able to go all the way to 2 or even 2.5 with a very tiny tool, like the 1/32.

Thanks for the quick reply!
I’m new to this so where would be a good place to find the chip load data?

Also, is there a difference in 2 flute and fish tail end?

What depth is being used here ? Could I assume half of the end mill radius ?