Over the past several months I have been building a cabinet for my wife. Today I got it all assembled (minus the shelves which are still in the “paint shop”). The outer doors have plexiglass see-through with LED strip lights inside the front edges. I incorporated the use of my xcarve and - I did some v-carving on the drawer fronts and my first relief carve on the center door. Looking back on the many things I learned along the way, there are several things I would do different/better were I to do another but, that aside, I am very happy with the results. And, more importantly, she is too. 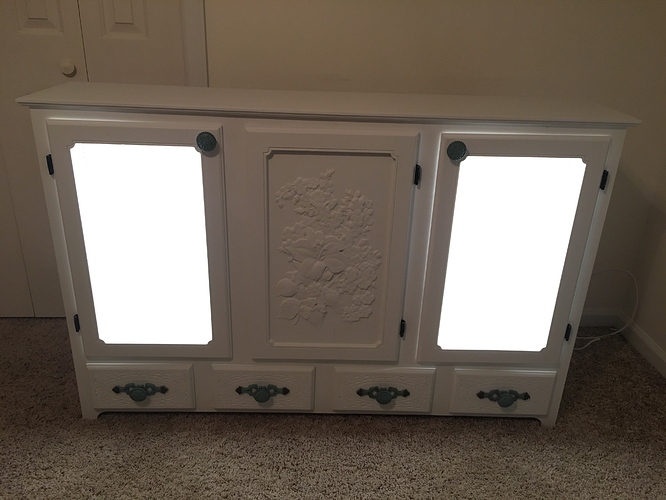 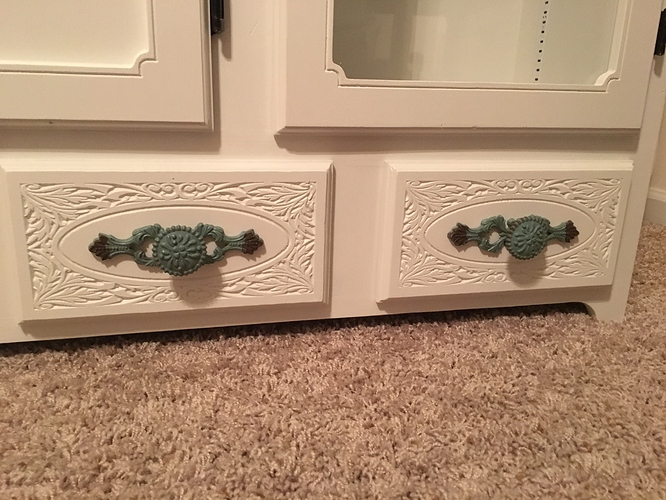 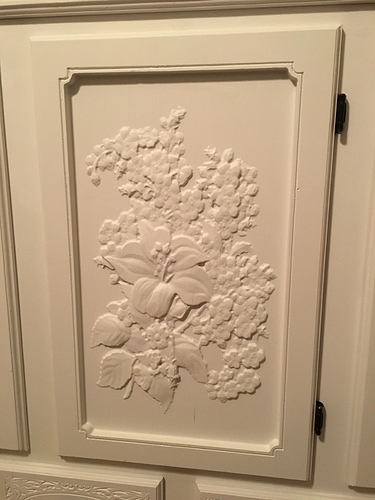 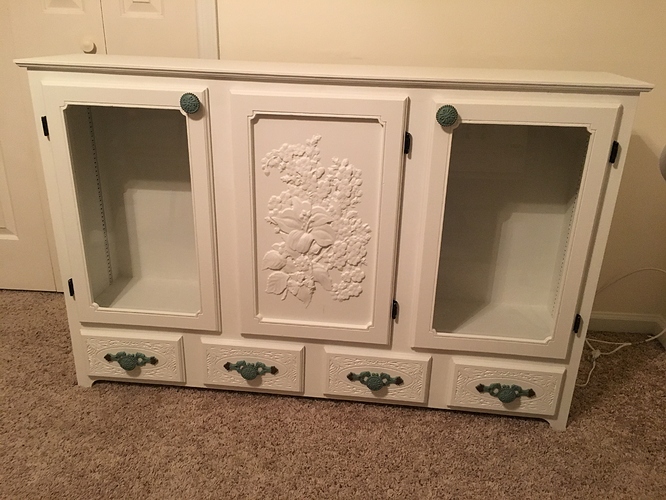 you see the light leaking out around the edges? would a foam strip prevent that?

you see the light leaking out around the edges? would a foam strip prevent that?

Yea, all along I figured it would do that. It was in the back of my mind and thought I’d wait till done and see just how bad it might be. Guess next time I am at Lowes/HD and see what options they have as far as the foam stuff.

Thanks. Although my paying job is software developer, I enjoy an occasional project like this. Many years ago, before driving age, I worked during the summers at a woodcraft shop with my grandfather. He was a cabinet builder by trade and I learned a lot during those times. Over the more recent years I have built a tv cabinet with sliding doors and oak crown molding I milled myself, fireplace mantle, various bookcases, and then this. I like to take on each new build with a challenge for myself - “what can I do here that I have not done before?” What I liked most about this build was the challenge of incorporating my new xcarve in with the project. As I said earlier - mistakes were made, splinters obtained, and lessons learned but, overall, I am quite happy with the outcome. What’s next? A flip-up roll around table for the xcarve. I told my wife that I would not start that project until her cabinet was done. That build is slated for the Christmas holiday break so, between now and then, I’ve got some designing to do.

Wow that is fantastic!

That is so nice. I need top learn how to make cabinets. 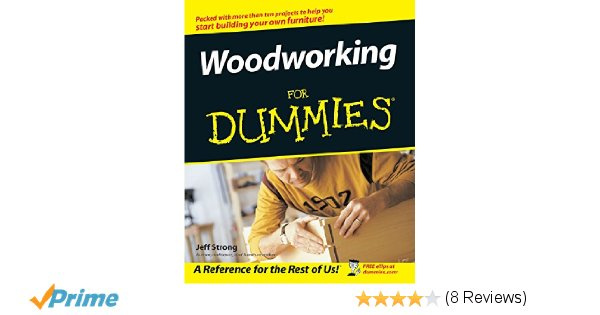 actually come to think of it I do not think I have actually ever read one but for some reason its always the first thing that comes to mind when recommending a book just gotta love that name!!

but they are terrible huh?

Thanks everyone. Once the shelves are in I will get some better quality pics.

Oh, and I failed to mention, only because it has been awhile since dealing with it, a sincere nod of appreciation to @PhilJohnson. While doing the several hour cave on the door front the process would end prematurely - Easel would show 100% done when, in reality, it was only about 30%. Phil helped me get my software versions (for both grbl and Easel driver) set and it’s been blue skys and green lights ever since. Thanks Phil.

@PhilJohnson haha. My son turns 6 in a month, now he just wakes me up to say he is going to pee, or to watch cartoons…even though we tell him he doesn’t have to tell us, he said he likes to haha.

Very impressive. Really like the carvings on the door and drawer faces. Your own design? Thanks for sharing.

Thanks. No, the designs are not mine - I don’t have that talent. I found them various places - 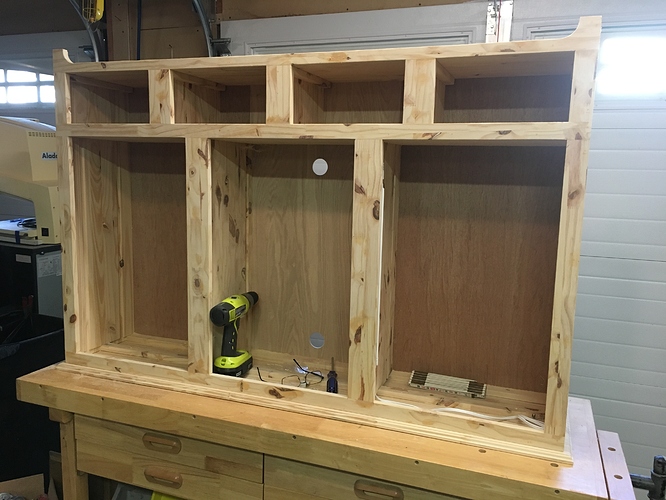 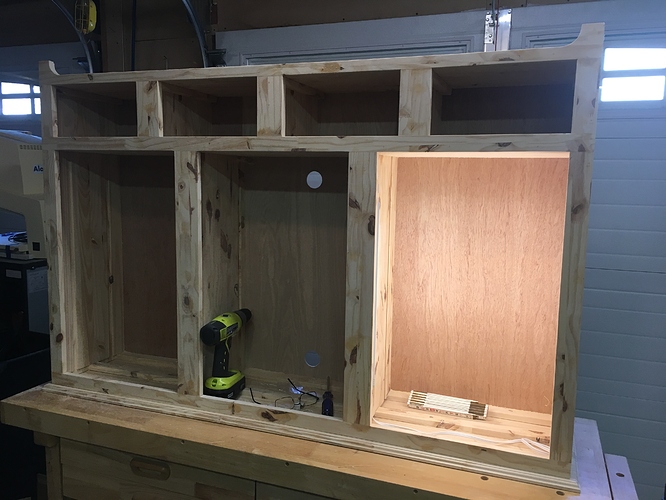 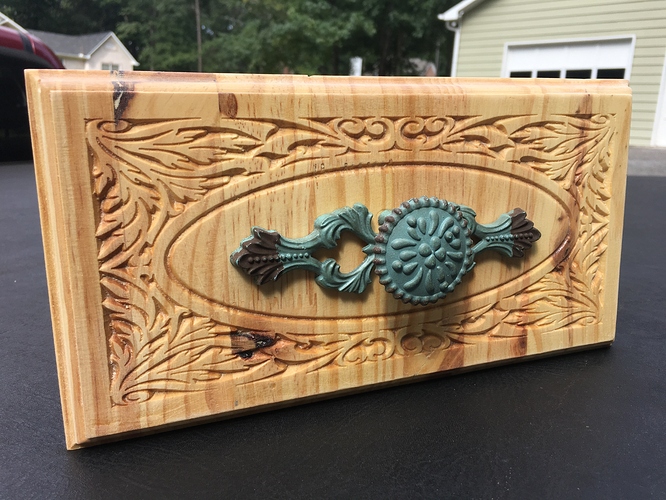 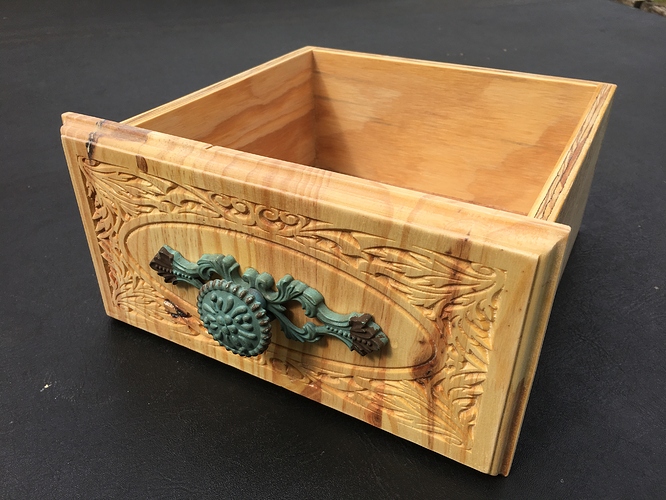 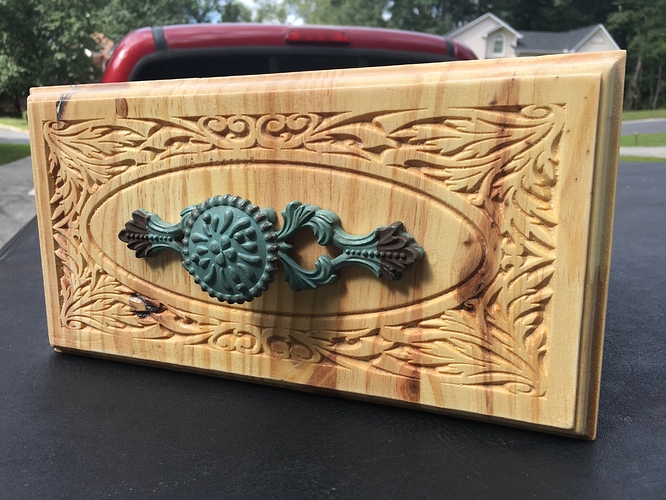 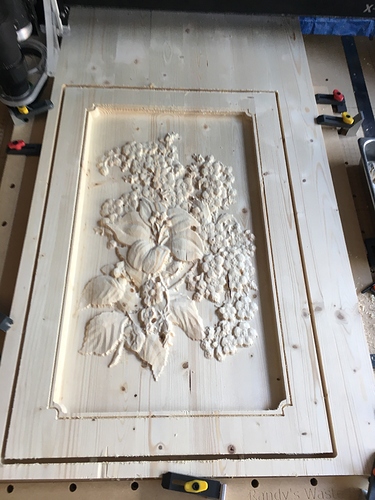 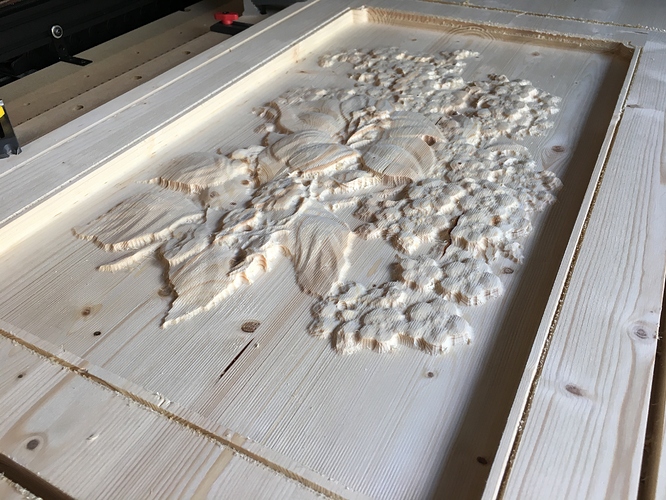 curious did you ever see about the foam stripping to block the led light?

curious did you ever see about the foam stripping to block the led light?

Not yet. Need to get some type of cabinet locks to keep our 2yr old from opening the doors. Plan on doing both at the same time.