Been a bit of a struggle, but it’s all good now. Used workspaces. 1st was all letters except “Open 1st” with 1/32" bit. 2nd workspace was “Open 1st” with 1/16" bit. 3rd was cutout of silhouette with 1/8". Haven’t tried 2 stage carve since the first trophy messed up and I need to get 10 trophies made asap. I’ll figure out the 2 stage problem Monday or Tuesday. For now…I’m released and have other trophies being carved now. Total time including bit changes was about 1 hour 40 minutes. Painting on one is done while another is carving so it works out. Thanks to everyone for the help while this project started. 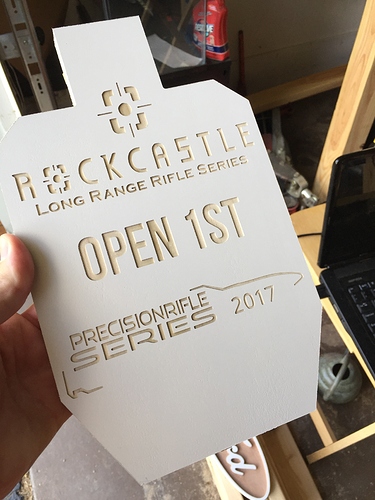 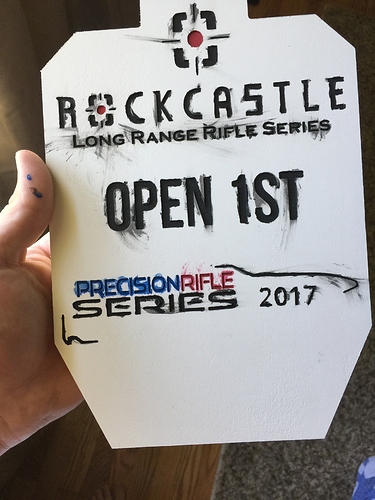 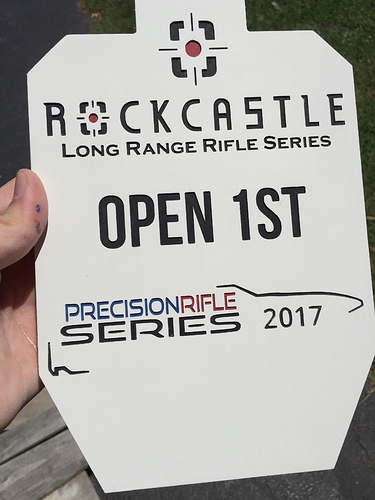 Looks great how did you paint it?

hard not to be proud of that. the text inside the shell at the bottom needs bumped down a bit. very cool overall.

Nice concept, layout aside of what @JeremySimmons suggests, which I agree with, and execution.
I like to doing a test run of a piece before the finished project to nail down anything I would like to tweak.
The test runs then go on the wall above my machine.

Very nice. The painting looks great. What was your process?

I understand what you are both saying Jeremy and JK but it’s copied exactly as the logo is. The “precision rifle” is slightly larger just so the bit could cut it completely.

Cut out of poplar. Planed and sanded smooth then rolled on a couple thinned layers of white. Sanded smooth and added 2 more thin layers and sanded semi smooth.
Letters I used some tiny brushes I got in a pack at Hobby Lobby and the paint I used was acrylic from Walmart.

Also, after painting each letter I just dabbed off the excess paint so it didn’t build up. Then some 220 grit to finish and clean up. I’ll seal all with a poly spray

If the original is set up like that then you are correct in not altering it. “artistic license” doesnt apply in every case.
Well done sir.

copied exactly as the logo is

You removed the bottom line of text which distorts the overall composition by causing the additional negative space at the bottom of the design.

It’s a great piece. I encourage you to strive for fidelity in reproduction next time.
All of that text and the bullet could have been v-carved.

I left the bottom off as requested. Other than that it is the exact same.
I’ll actually be shooting in the match. Somehow I’ll hobble along with my walking boot lol

I really want to get in to long range competitive shooting. Wonder if this is the way to go? Most of my rifles are “Too Heavy”.

Depends on what type of long range shooting you are doing. PRS type or bench rest. The rifle I’m using for this match is not light by any means.

And believe me Jeremy…I’m working on learning F engrave. It’s a struggle.

The club I belong to goes by NRA high-power silhouette rules which have a firearm weight limit of 10 pounds. I have a Remington 700 Police model in .308 which is one of my favorites I also have two ARs I built. One in 6.5 Grendel and one in 6.5 Creedmoor. My vision isn’t super so I prefer shooting steel at distance rather than shooting for points. Just sounded like it might be fun.

Also I think the trophies came out great.

This match is all steel. Various shapes, with distances out to 1600 yards. I honestly have no clue what the rifle I’m using weighs. I still have my 308 for deer. Used a 6.5 creed for deer this past season and killed one at 785 yards and another at 928. Using a 6 dasher for this competition.

yes. it is. but it’s free. I can’t recommend v-carve from vectric enough.

V carve is on my list. Unfortunately 4 MRI bills in a matter of 2 months comes first! 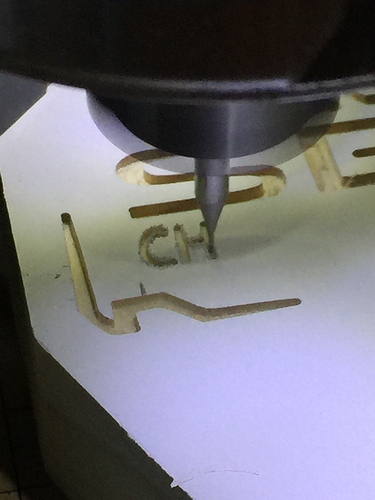 sorry to hear about the MRIs. We do those once a year for my wife’s MS.

That last cut is going to look amazing, and it will scratch that O.C.D. itch oh so nicely!