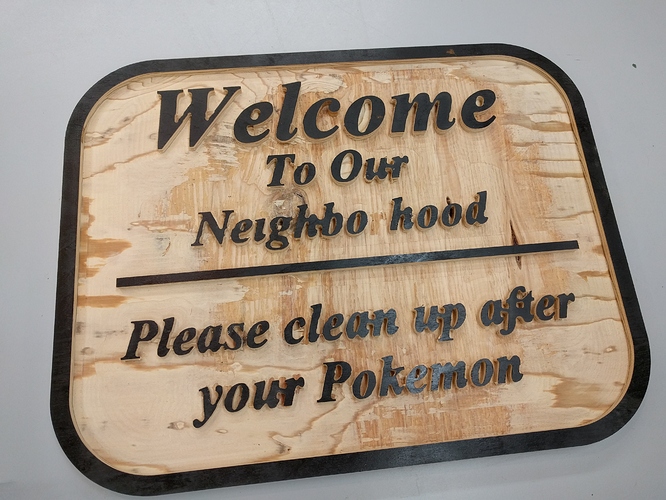 My neighbors have been complaining about people not picking up after their dogs so they wanted a sign. If a sign was inevitable I wanted it to be nice, so I volunteered to make one. This was my first draft (changed for humor). I designed it in Fusion 360 and carved it with 1/4" and 1/8" bits using Easel as the gcode sender. I used the machine’s limit switches to set up home for both bits, and referenced the bit Z depth off the wasteboard. To be lazy for this trial I painted the top surface black before the carve so I wouldn’t have to paint it after - the final version will have two colors and will be carved from MDO.

I learned a few things from this first try. First is that 1/4" is WAY too deep to carve the letters, half that much would be plenty. One reason is that 1/4" got me into the lesser quality core layer of the plywood so it doesn’t look nearly as good as the outer layers and is weaker - I think that’s why I lost a couple of pieces. Also I made the letters too small and used a font which had too many fussy details, should have picked a simpler font and made it bigger. Because of the size even the 1/8" bit wasn’t small enough to get into some between-letter spaces.

But overall it showed my technique for homing a multi-bit carve worked quite well with little fuss.

I carved the words on my CNC cart drawers about 3/8" deep (50%), while my latest sign was carved only about 1/8". It took a lot less time to carve and paint, and I think the sign turned out better. The “paint first” method works well too, since spray paint is a lot easier to apply than brush paint.

I’ve just been doing test carves so far with scraps of 3/4 plywood. The final sign will be carved from MDO.

I got a tip the other day that the problem I’ve been having with gaps between the letters not being cut is because I was using Rest Machining with the 2D pocket clearing operation instead of the 3D pocket clearing operation. When using 2D operations the Rest machining doesn’t actually keep track of what’s already been carved, it just assumes that anything bigger than a given diameter (which defaults to twice the diameter of the bit you’re using now) has already been cut. The 3D operations actually do keep track of what’s already been cut and will only do what’s new.

Seems to me this is one of those gotchas in Fusion 360 that you just have to know - a feature named the same thing “Rest Machining” actually operates totally differently in two different contexts and probably shouldn’t even be called the same thing.