Overall for a first attempt I’m happy with it. 3 things however did go wrong, two of which I cannot explain.

First issue was about 75% through the adaptive clearing cut. The spinel decided to take a dive into the part in a weird spot, it was suppose to bore but not in that location or at that point in the code. No idea what happened. Redid the cut as a pocket clearing and it only took 1/4 of the time and I had no issues.

The third problem is that I can’t seem to get the xcarve to cut all the way through. The tool path looks like it’s suppose to and I set the bottom as -1 from stock bottom, but I still have several mm until it cuts through. Not sure why this is.

1000mm xcarve, stiffen x axis mod with the dewalt 611 and a 1/4" dynasty viper stealth coated 3 flute. Only air was used to clear chips.
.18mm dot
1000mm/m
Spindle speed was changed several times during the cut to try to eliminate chatter. Started at setting 1, approx 10k rpm, ended at setting 2.5 which I’m not sure the speed.
Design and tool paths From fusion 360, easel ran the gcode.

This is where it took a dive, about 4mm worth. 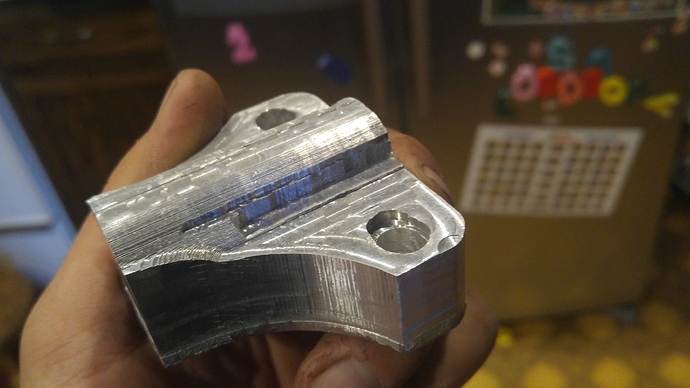 This is the retract height spot that it dug into. 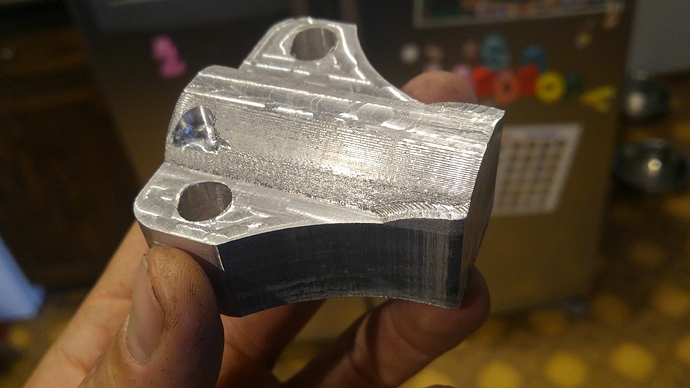 And here you can see where I can to cut the remaining bit out on the band saw. 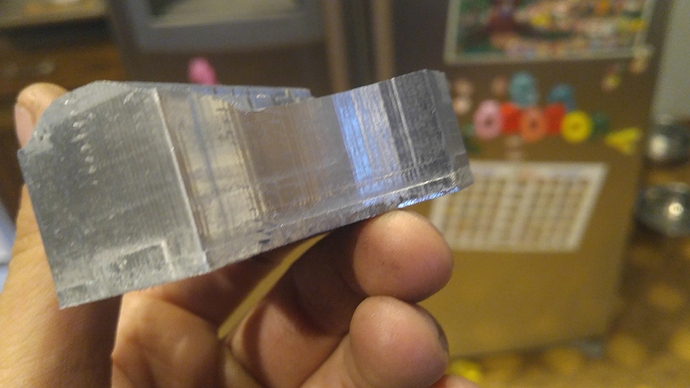 Three possibilities I can think off.

(By the way! I don’t remember if anyone tried to cut 2" thick aluminum with X-Carve. Brave)

Yeah probably a bit of leap of faith especially with it being my first piece ever cut from aluminum, however, it did well. I’m sure it could have been much better if I invested the time to use a ball nose to finish it up. I checked belt tension and it was good. The only thing that was loose was one of the v wheels on the Z. I didn’t see it happen but my friend who did said it just went down like it meant to. Maybe it was the wrong strategy to try idk.

My next attempt is to bore the last hole which is about 2.4" deep so we will see how that goes.

Problem is the bit took a bite and over powered your z axis, Try a smaller bit, increasing power to your Z axis, make shallower cuts.

I doubt that a carbide bit spinning at a minimum 16000rpms will bite into anything. Far more likely to snap any size .25 or under.
Seems like more of a software glitch than anything.