Just made a quick dust shoe and what a difference. I should have done this at day one. I had a hard time with the brush strip due to edges being too stiff.
After epoxy reinforcements so far so good! 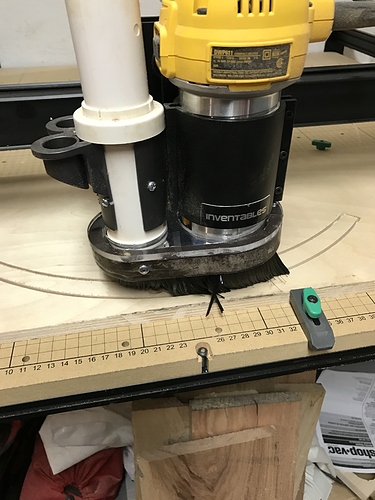 There are two major options for dust boots - where the dust boot moves up and down with the router and one where the dust boot stays fixed and the router moves up and down independently from it. There are tradeoffs to both depending on the type of project - a carve where you 3D carve and remove variable and large depths from the top surface will work better with the moving boot (as long as it doesn’t crash into the remaining material) because it will stay closer. The fixed boot works better when you’re carving grooves or deep holes in an otherwise untouched top surface because the machine won’t be trying to push the brush down against the top surface of the material when going deep.

At first the moving boot seems obviously better, but I quickly found that the non-moving boot actually caused fewer problems. The Suckit dust boot so far has been the best working tradeoff for me.