This was a request from a co-worker. I used a cutting board from Bed Bath and Beyond. I used walnut for the inlay. 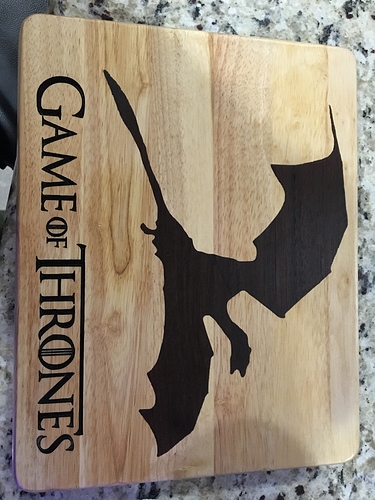 Is the lettering inlayed?

Looks great! Did you use the inlay app?

Is the lettering inlayed?

Nah, I carved them.

Looks great! Did you use the inlay app?

I didn’t try the app, I just used the image to cut the inside depth, then same image but outside cut for the inlay.

Thanks, it’s nothing to compared to the awesome work I see here

That is awesome looking. A project high on my priority list after assembly.

It wasn’t near as hard as I thought.

What size bit(s) did you use?

that is really nice… i’ve always worried about what sort of tolerance or padding i would need to put on the female side to allow it to fit. Did you just take the same image and do one as an inside cut and the other as an outside cut and everything fit? Did you use Easel or something else? What bit did you cut everything out with? How thick was the inlay?

Great stuff. I’ve done epoxy inlays, but I’d like to make some wood ones soon also.

I used a 1/4 clearing and followed with 1/16 detail. Yes I used the same image using easel. The inlay was cut from 1/4 walnut and the depth on the female portion was .2 in.