First off, I love checking out all of the unique projects on this forum. I have been really interested in doing some stuff with LED and finally made a project that needed a little something extra to make it pop.

I recently moved from Denver to Philly and it has given me all sorts of new ideas on things to make. I originally bought my X-Carve to help with my small business making beetle-kill flags and such, but now I am finally able to utilize it to catch up on some personal projects that I’ve been wanting to do (but never had time).

I sketched up the city skyline based on an actual picture I took of Philadelphia by tracing it in Inkscape and deleting a ton of nodes once I imported into Easel. The key to remember is to make sure to add tabs to keep the inner parts of letters like “A” and “P” from getting sucked up into the dust collector. Luckily, I caught it in time to adjust.

Thanks for looking and carve on, Wayne. 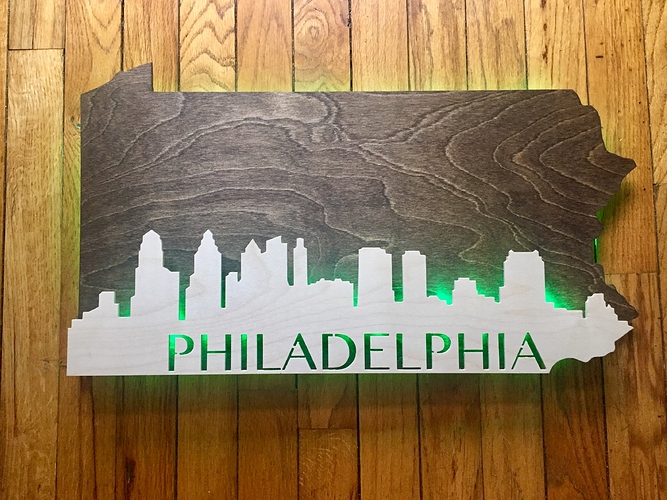 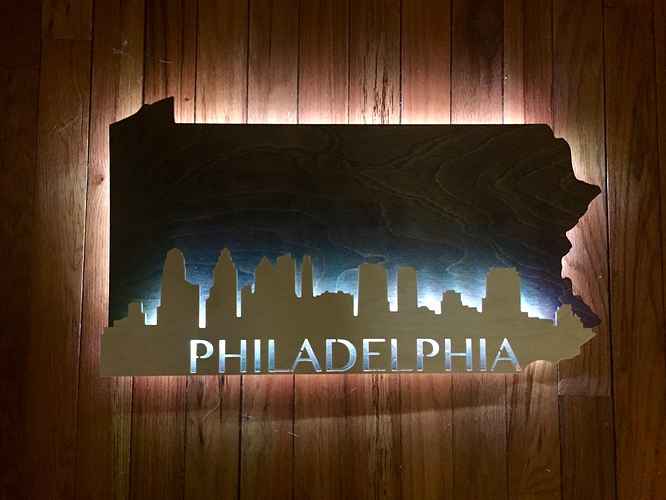 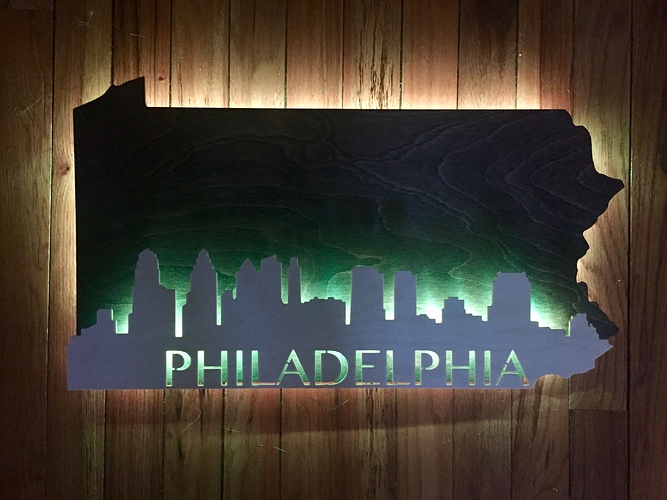 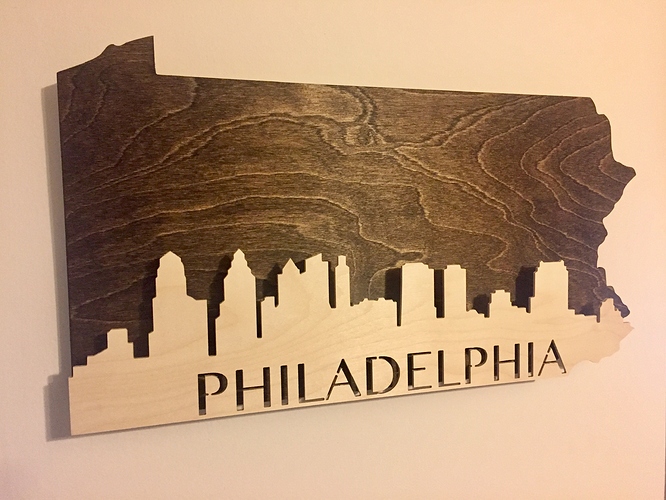 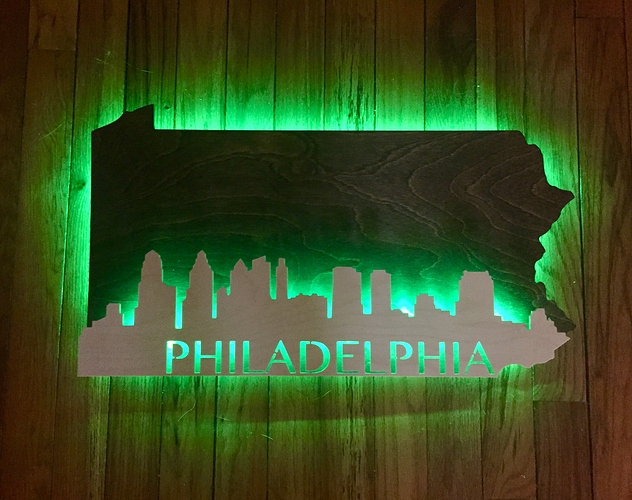 Fantastic work. Thank you for sharing.

wow that turned out really well with the lighting… I wouldn’t have expected it to pull the color of the lights so well. what did you use for finish?

That looks great. I love the concept, the skyline superimposed on the state’s silhouette and lighting from behind.

I thought about finishing it with a high gloss polyurethane coating, but I mounted everything up to see how it would look and it came out better than I was expecting, so I left it unfinished.

On the next one(s), I am going to finish with the poly spray coat and see how that looks.

For finish, danish oil is super easy to apply and could give it a nice soft sheen without overdoing it.

I need to learn more about deleting nodes in Easel. Am sure there is a video somewhere on it.

Editing nodes in Easel is as easy as it sounds, Drew. Simply click on the image and hit “Edit points”, then voila. Use the option key to move nodes around without “snapping” them to other points.

Hmmm. I don’t get it. Will search the forum for something about how or why you would care about or do this. What does a node do even? Is it the same as a point? Why do I care if they are there or not there? What does Alt disabling snapping mean or do?

I get that you can drag them to mess up a shape. Won’t deleting them mess up lines? And the help function goes on about using nodes (points?) when drawing but little else. I’m sure there is something here somewhere that goes into them and will dig around for it.

A node is indeed a point.

each node connects to it’s neighbors using either point-to-point (straight to the next one) or curves (technically splines, which are the handle you can grab to modify the curve).

snapping is the default behavior in Easel… when you move a node, and it’s near lining up either vertically or horizontally to another node it will ‘snap’ into alignment… good it you’re trying to align them, bad if you’re not.

deleting nodes can be useful when you want to make a shape less complex/jagged… and they can be very complex if the shape came from an image file that was being traced. Basically it lets you smooth out the lines so that cuts aren’t trying to adjust for every pixel in the original image, but rather a much smoother curve/line (which also calculates faster and doesn’t make your machine act like it has epilepsy jumping back and forth)

Thanks, Nox. That is very helpful. A search of the forum found references to deleting nodes, but nothing about why or what to look for or anything behind it. I started poking around on it with a project of mine and it’s interesting to play with. Lots of deleting and then undoing as I see how things react but I’m starting to get a feel for it.

Cool Project. I was just across the river there in Camden… Got to spend the night on the USS New Jersey.

Nice! I have yet to convince the wife to go check that out, but it’s high on my list of things to see.

Sometimes when importing a file such as a state outline. The outline will be for lack of better terms 2 nodes wide, thus doubling your carving time and not adding benefit to the project. You can delete the second set of nodes and the outline will only cut once. Or if there are areas of a picture that don not need to be added for a more simplistic carve you can delete nodes.