So my buddy asked me to make some plaques for him to give as Christmas presents. I figured it was a good opportunity to push myself to learn more, faster. I did the 611 upgrade, and I spent the money on V-Carve Desktop, spent some time learning it, ran a bunch of test cuts, worked up the design for him, and have generally been happy with the results so far. He wants red oak, and I’ve struggled with finding the right settings to get a clean cut with the red oak. Last night I was confident enough to pull the trigger. Final plaque size is about 11 x 17. I started with rough-sawn 5/4 x 13 red oak. I ripped it down to 12" wide so it would fit through my planer, and I planed it down to 3/4. I ran my v-carve toolpaths, followed by my profile toolpath using a 1/4" 2-flute upcut bit to cut the piece out, with tabs. I set it to do a finishing pass of .05, and reverse direction on the final pass, as I understood this would provide a better surface finish. But once it turned around to do the very last pass, it didn’t make it more than about 2 inches before it started chattering, and another inch or 2 before it took a detour… disheartening! It dug in and pulled itself right into the workpiece. It shook so bad that a bunch of screws came loose on the machine. Time to start over… ugh!

Yeeeah, do not use climb milling on the X-carve. The structure is just not rigid enough to support it. On a conventional mill (or a stout router, of course) a climb cut will produce a much better finish than conventional cutting, particularly as a last pass finish. Unfortunately, with the flexy-frame on the X-carve, it just starts chattering (as you noticed). Don’t lose heart, it’s just a matter of getting the feel of your machine and program. I have done that exact same cut-out on walnut well over 50 times now for paying projects.

Once you get the feel for it, it works just fine. Only structural mod on mine is the “bolts between the X-rails” mod for a bit of stiffening. 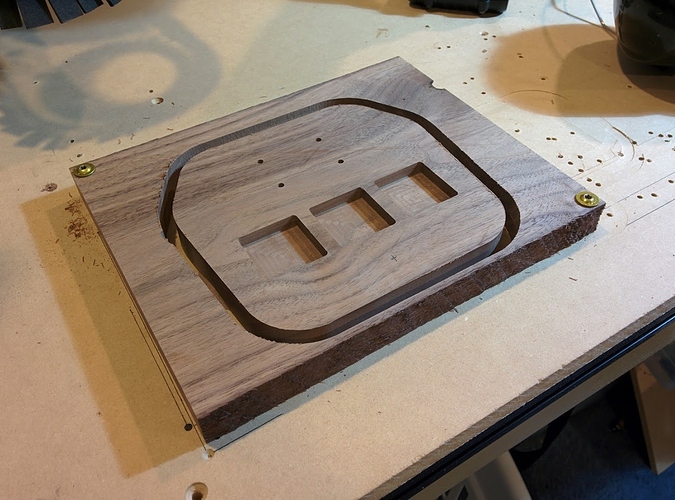 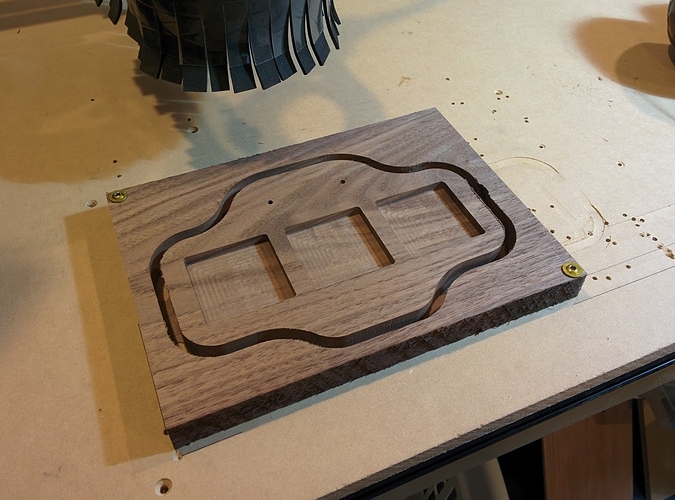 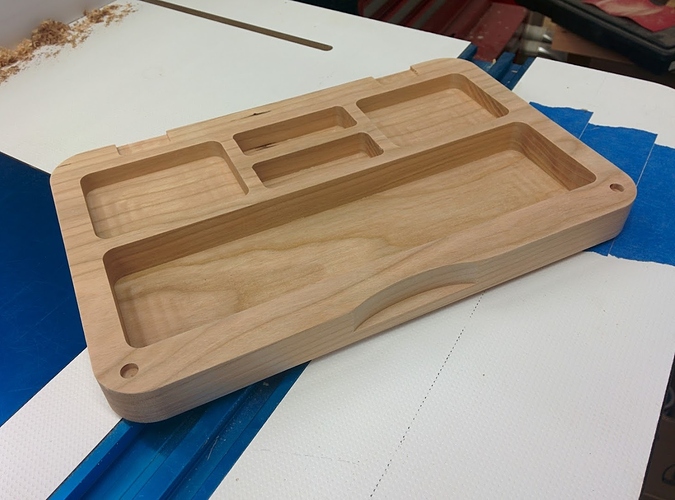 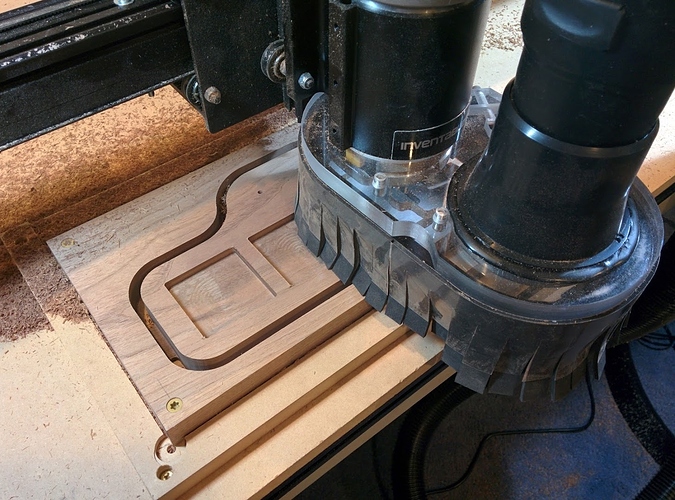 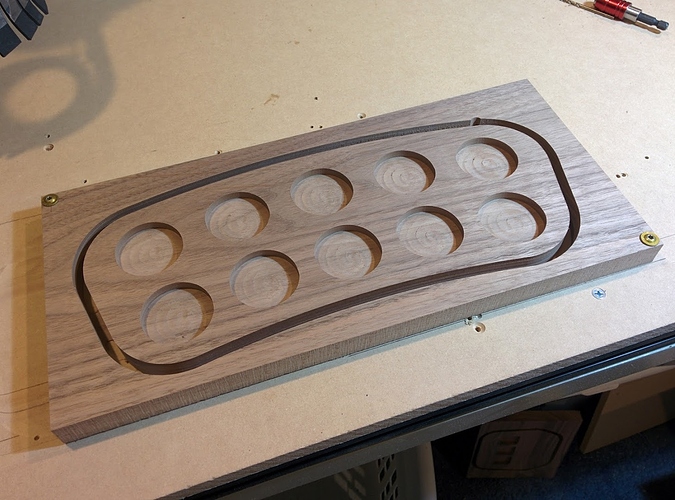 Thanks. I have the parts for the stiffening mod, I just haven’t found the time for it yet. It’s definitely on my radar. I’ve already reworked my toolpaths, and tightened up the machine. I’ll run a few calibration cuts tonight to make sure it still cuts true, then give it another go.

You’ll get it, no doubt there. Just takes a few runs to get the hang of the programming, and how it likes to run. I also use a .020 finishing pass, instead of .050. Probably doesn’t matter that much, really, but that’s just how I’ve got mine set up.

Just noticed that in the second picture from the bottom there, you can actually see one of the bolts between the rails.

Ok DanBrown now you have sparked my interest on how in the world you were able to do a project like those. Can you give me a sample walk through specifically on that last project.

Yeeeah, do not use climb milling on the X-carve

I’ve been using climb milling with no problem what so ever. Actually in all of your pictures you posted there’s climb milling, even if you choose conventional milling for your contours, you’re still climb milling the outer edge.

And you’ll notice that the surface finish on that is absolute crap, all chattered and nasty. Then look at the inside face that was conventionally cut with the finish pass. Just no comparison in quality. You can see that particularly in the top of the part, where the inside surface is generally visible. I’ve just had no luck with climb cutting at all, I get tons of jerky motion and excessive chatter. Your mileage may be entirely different, of course, given your setup. I suspect that if I stiffened mine a bit more, I could get away with it.

@BrandonTaber; All of those have been designed in Fusion 360, and posted using the “Standard GRBL” post. I have my G28 home position set to 20mm in from the homing stops, and down just about 5mm from the top of the Z-home. Not a whole lot to tell about them, just modeled them up in Fusion, used the built-in CAM to path them, and sent to the X-Carve using ChilliPeppr. Anything in specific that you’d like to know about?

I actually went back and looked at my toolpaths and i was climb milling the whole time. It was when it switched to conventional for the final pass that it took a bite out of the workpiece. Getting ready to give it another go, but this time I’ll just not reverse the finishing path. Fingers crossed.

OK, ran it again tonight, and once again it took a shit on me. I changed the outside cut to conventional, an NOT reversing the finishing pass. Got down to nearly the last pass and it started chattering and took a left turn on me again. I caught it quicker tonight, so it doesn’t look as bad, but it’s too much damage to salvage. 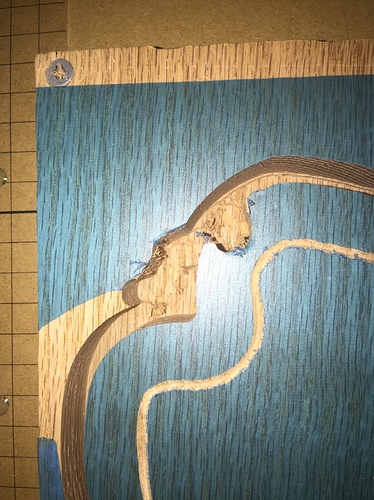 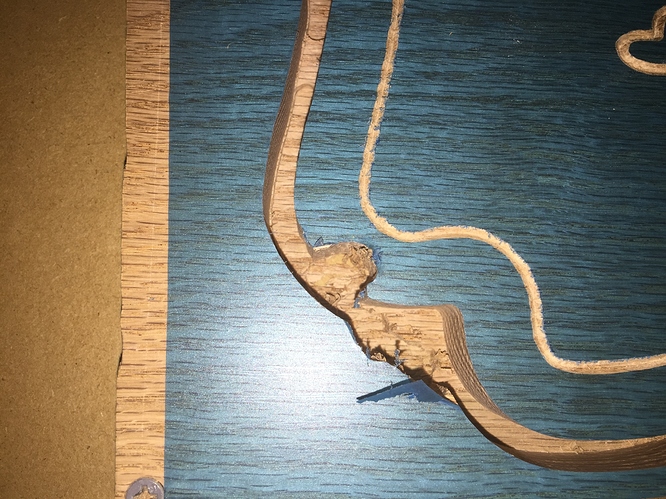 Reduce depth of cut by 50% or more. For red Oak I have been using .018 and it seems to prevent this. It is just my opinion but its the bit, not the machine. Make sure its sharp and cut very shallow passes. Good luck!

@DonDespain, thanks for the input. The bit is brand new and has only been used these two times, so I assume it is sufficiently sharp. I will try reducing the depth of cut tonight. Do you use an upcut, downcut, or straight when making a cut like this?

I use the two flute spiral upcut, fishtailed at the bottom for flat carves. Probably wouldn’t hurt to slow the travel down a bit too.

Maybe do a test cut of a simple shape but deep like the carving your doing, watching, listening for strong chatter and “tweaking” depth and travel speeds till you feel the machine is going to cut right. Red Oak can really have some super hard areas. it just takes tons of patience. I know that feeling when you’ve watched a carve forever only to have this happen at the end. For me I set my carves in Red oak very conservative at .018 depth, and around 20 inches per minute. Takes forever but no headaches.

Good lord, that slow, Don? I’m using walnut, cherry and maple at speed-1 on the DeWalt, at 40-60ipm, with a 1/4" depth of cut! That’s with either a single-flute downshear, or a two-flute upshear. And G-Wizard says I should be pushing it considerably faster than that on feeds.

This kind of failure really loads up the machine. I find that adjusting all the v-wheels and squaring up the rails is usually necessary to avoid a repeat performance.

I also found that cutters with straight flutes are more likely to catch an edge and pull off track, in a deep cut with vertical side like this. I really like single tooth cutters when milling wood.

Just speaking to his specific issue and I am certainly no expert but that is what worked for me to identify the issue on my machine. I too work with many domestic and imported lumbers from all over the world and run faster and deeper too, but what I have learned is it is better to start at a speed you know will work quite easily to be sure the issue is with the machine or the code and not with the bit/speed/depth.

Sounds like great advice Matt! SOmething I will keep in mind too!

This is good advice to be sure. After the first failure, things loosened up dramatically, to the point that the spindle mount wobbled around like crazy on the z. So I tightened everything and squared it all up. Ran test cuts and checked my dimensions and everything was good on all 3 axes. I will have to check it all again tonight before I start my next attempt.

Just have to be careful you don’t take it the OTHER way too far either. That slow and shallow seems like a bit of a recipe for burning and dull cutters, the chipload there is just REALLY light.

Ran into similar issues. Below is a consolidation of helpful topics. My last post to that thread list the things I had some to solve it.

I am working on consolidating the most helpful post on various subjects in order to make finding solutions to common issues easier. When I was fresh to the machine and it's problems, I had to figure out how to word the searches in different ways in order to find solutions. I am still finding older post that were worded slightly different that didnt show up in my original searches. For now, it is just links to the post, however, I plan on creating more of a at a glance problem/solution referen…

I know this has probably been looked at and discussed, but these are a few issues that I had to fix on my machine that were causing me to have pretty much exactly the same types of problems that you appear to be experiencing:

There’s lots of info on the forums about feeds & speeds and climb versus conventional milling. All of it is worth reading, however nothing beats learning to get the most out of your particular machine; which means learning about all of its idiosyncrasies and weaknesses. This is something every tradesman needs to do on each of their machines, irrespective of whether it’s an X Carve or a multi-million dollar CNC milling workstation. Just because I can do a cut .5" deep at 80" per minute in ironwood with a ¼" bit, doesn’t in any way mean that you’ll be able to do the same (I’m exaggerating for effect here…)

Keep in mind also, that your first cut (there very first path the bit takes through the wood), is always much harder on the machine than each subsequent cut - as such, your feeds and speeds will need to be adjusted to suit:

When testing different feeds & speeds, the big trick is to only adjust one thing at a time. Me? I’m a lazy kind of machinist and I simply leave my DeWalt at it’s maximum speed for 95% of the time. Pretty much the only thing I bother to change between jobs is the feed rate. There are many experienced folk here that will give you a dozen reasons why this is a bad idea. But it works for me, my work is cut cleanly and quickly without burning, my tools last for months and the process of setting up between jobs is vastly easier. The only variables I really need to consider for each job are:

As I mentioned, what works for me may not work for you, but I’d suggest that many folk over complicate things to some degree. A router such as the DeWalt is designed to be used by hand - as such it’s designed to be able to withstand huge variations in workload. Tweak your machine to remove as many potential sources of error that you can find, then play around by adjusting just one variable at a time until it does what you want. Then just go and make stuff…