I'm relatively new to woodworking / X Carving, but I'm in the middle of a new project and thought I'd share. I'm making 3 custom Scrabble boards for my family who's been obsessed with the game since we were children (was supposed to be for Christmas but couldn't finish in time, what with work and multiple X Carve problems)

The plan:
I started off with several roughly milled planks of soft maple from the local lumberyard and handplaned / jointed them into slabs 16" x 16" (took forever, but I don't have power tools since I live in an apartment). Then I used the X Carve to carve out the individual slots for the pieces (took about 8 hours per board)

Successes:
-X Carve has been super useful in this - no way I could have done this project without it
-Easel was really easy to learn and tweak
-Easel Inlaying tool was great. Using "0" tolerance is the way to go.
-Despite several setbacks, X Carve accuracy has been pretty spot on (when it's "on")

Challenges:
-Easel "Replicator" tool didn't have the precision I needed for the spacing between the tiles, so I had to do it manually (you can't manually type in the spacing you want)
-X Carve Precision was hit or miss
-Changing from double sided foam tape to clamps helped (there's a slight amount of give using the tape)
-Runout + interference from the 300W quiet cut spindle (I can't confirm 100% that this is a problem, but I just ordered the Dewalt 611 upgrade and will be using it soon)
-X axis belt was too loose, then too tight, causing it to overstretch. Replaced it. Also had to shift the aluminum pulley away from the Nema motor to keep it in line with the belt
-As a precaution, I slightly increased the voltage to X and Y nema motors
-Cuts are less clean by the end of the project - I suspect the 1/16 bits starts to dull by the end (even brand new ones I bought from Inventables), or maybe runout from the spindle increases as the project goes on?
-Sound is a bit of an issue since I'm in an apartment. Hoping the Dewalt doesn't exacerbate that

Will be finishing this over the next few weeks but wanted to share the progress so far. Let me know if you have any questions or suggestions! Thanks! 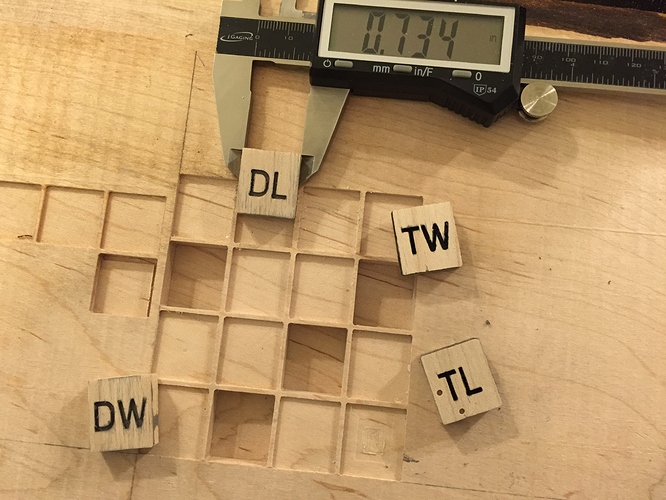 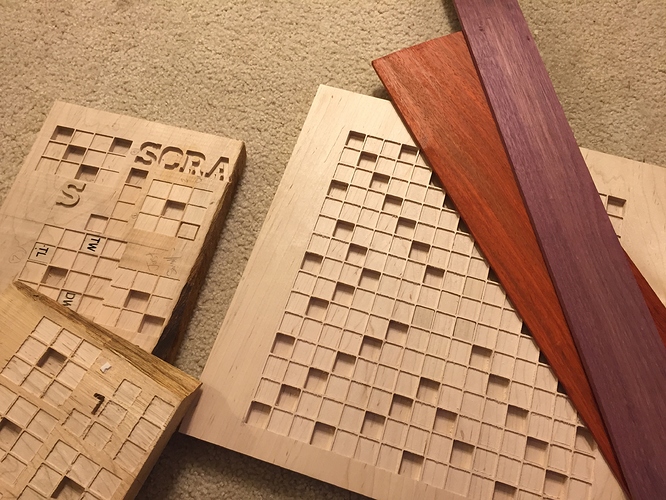 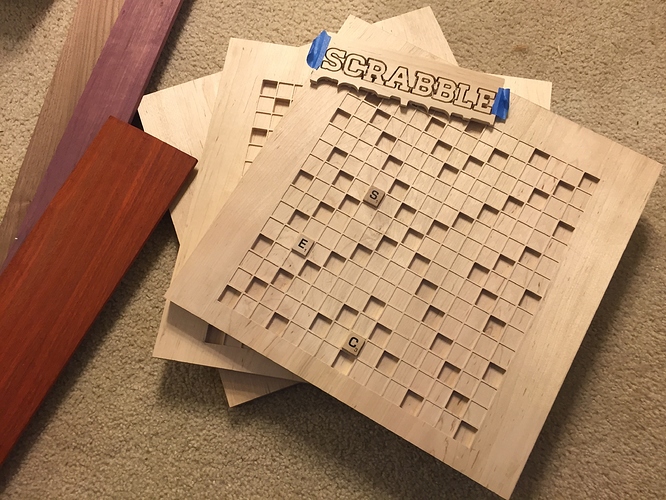 LOVE IT, this is on my list of to dos when I get my machine up and running.

Sound is a bit of an issue since I'm in an apartment. Hoping the Dewalt doesn't exacerbate that

The Dewalt will be louder.
Which will be even louder is your dust collection / shop vac. Dust collection is a must when using the DW611, and being in an apartment.

I found the Dewalt to be quieter than the 300 watt spindle. But bit being used can really vary the amount of sound.

A shop vac is much louder than the Dewalt.

Do you think I could get around using a shop vac if I built an enclosure?

An enclosure will certainly help with dust containment, but you still need a way to clean up and clear chips while it is cutting.

For the love of all things holy, please tell me you kept the Easel project. I would love to make this for my wife for our 5th wedding anniversary (since it's wood this year) and I know she would love it. It's our go to game for date night.

@Zach_Kaplan Here's a slam dunk Tip Jar case if I ever saw one! Beautiful work, @JoshC!

Thanks all! Great to hear the positive responses.

I am unfortunately (/fortunately) traveling outside of the country right now. I would be happy to share the Easel files but will need a few days to find the time to clean them up, consolidate different pieces and make them presentable. Will that timing work for you?

By the way, I realized I never posted pics of the final project. I've attached them below.

I would also like to give credit to this Etsy designer whose projects inspired some of my designs: https://www.etsy.com/shop/FantasticBoardGames

I'll keep you posted when the files are ready. Congrats on 5 years! 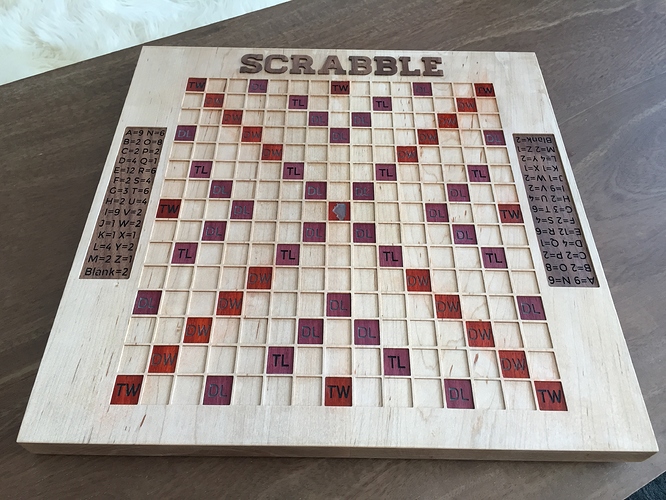 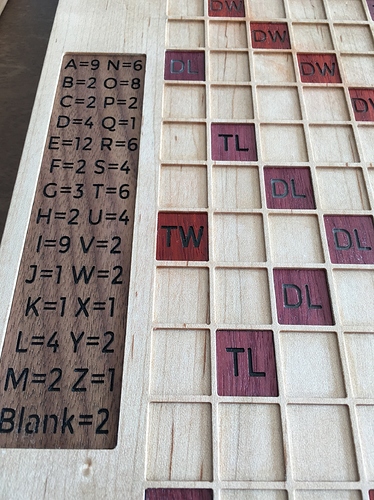 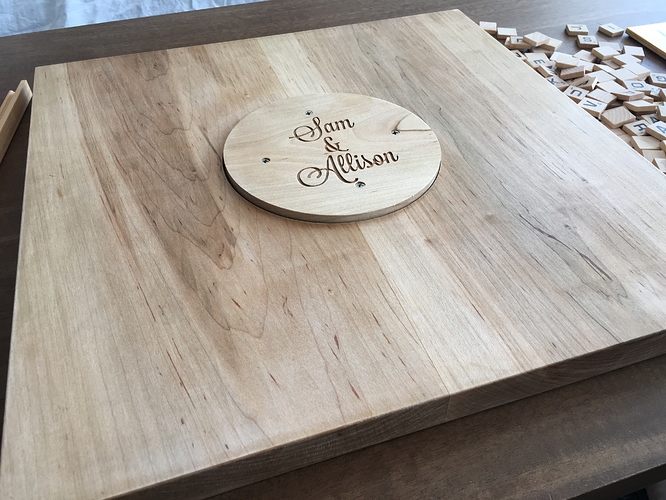 @JoshC Any luck with those files? =)

@patrickbreen Sorry for the delay! Been flying in and out of different countries for the past few weeks. I don't have much time right now so I can't be as thorough as I want, but I've attached hopefully everything you need to get started.

I tried to publish one large comprehensive project, but I wasn't able to get all the different Easel files onto one "project". For now, I've cleaned up / consolidated the files and shared the links with you below:

A few things to note:

-Overall size of board is 16" x 16" x 1"
-For the inlays, I originally used 1/4" Purple Heart and Padauk and used a 3 step process:
1) Carve the letters in and spray paint over everything, 2) Mill the top layer off to get the unnecessary paint off, 3) Mill the bottom off to get the inlays to be the proper thickness. However, next time I will use 1/8" wood to reduce the milling time of the main board, and not require the "milling the bottom" step. If you do this, you would need to tweak the depth of the "deep pockets" on the front of the board. In my experience, the glue for the inlays takes up about 0.1" below the inlay, so keep that in mind when you redo the depth of the pockets (you may also want to create a small jig that will let you push the pieces down to 0.04" below the surface to be consistent with the blank spaces). In my opinion it's better to mill out slightly deeper in the deep pockets then you expect, since the inlays can be squished down into the glue a little deeper if you need.
-Here is the turntable that I used. The 4 inch version works better for stability, but it was hard to find 0.25" wood that was wide enough in diameter, so I had to use the 3" version for some of my boards: https://www.amazon.com/Shepherd-Hardware-9549-12-Inch-Capacity/dp/B00004YOKA/ref=sr_1_7?ie=UTF8&qid=1468770136&sr=8-7&keywords=lazy+susan
-For the turntable, I already programmed in some of the drill holes + countersinks which aligns the screws up perfectly - otherwise if the turntable isn't installed perfectly, it will knock against the edges when it spins

I will try to add more advice when I have time. Let me know if you have any questions as you get started!

@patrickbreen any luck with the board?

Sadly, between being a new dad, and trowing out my back, I wasn't able to get time to be in the shop, so I had to break down and order one from your inspiration on Etsy (which turned out amazing)

My Shop is part of a detached, non climate controlled garage, so I really hope to get out to the shop before the viable season is gone and I miss an entire year of woodworking. If nothing else I will run some tests with the easel project you supplied and see if i can replicate your masterful designs =)

Nice, glad it worked out!!

I noticed that on many of the links, Easel is reporting the bit size to be too large. Is that what you were seeing or did you just ignore that warning?

@TimVannaman I just ignored that. I already adjusted all the shapes to be as large as possible to minimize the data loss, and I couldn't really avoid the problem with the current bit sizes available.

It's basically a non-issue except for one piece of text (Blank - 2), where a tiny portion of some letters is skipped over. I didn't even bother trying to fix it because no one else besides you will notice it, and it actually looks somewhat intentional/artsy.

Let me know how it turns out!

Which font is this in easel ?