So I lately tried my first inlay and first work with resin in general.

After getting comfortable with some really small pours, I was confident to try it on the cutting board.
I bought some wooden cutting boards from amazon.
Made my design in v carve, normal v carves with a total depth of 2mm. 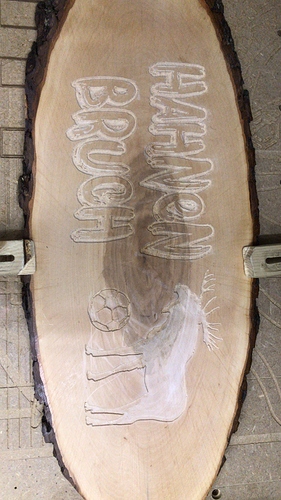 Seald it with clear Spray paint. And then painted it with acrylic paint. After 6 hours I poured the two part epoxy into the carve. It started good with Little bubbles. I wanted to pop them with the heat gun and then this happend 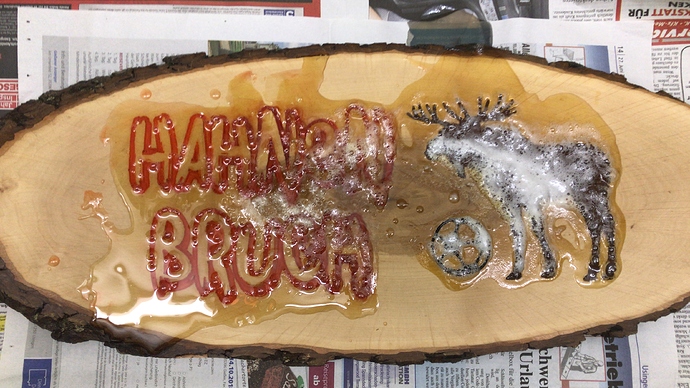 It started bubbling like crazy. My guess would be that the paint wasn’t dry enough and that the wood has still some wetness inside. There where no way to save this one 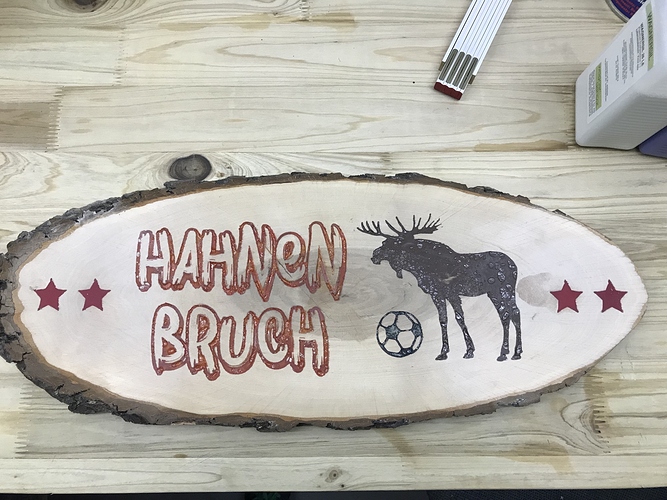 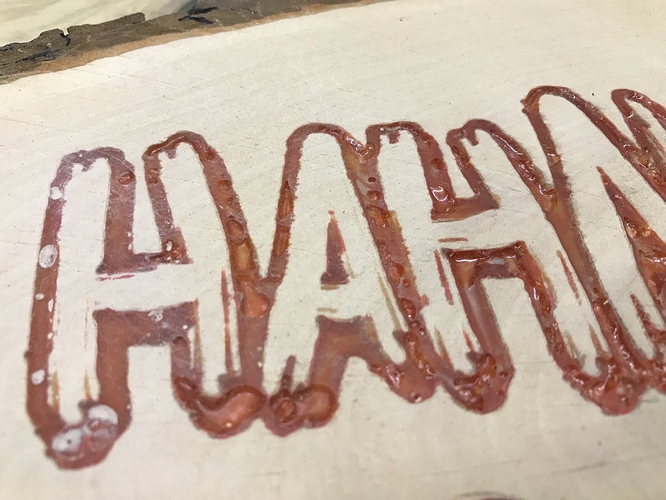 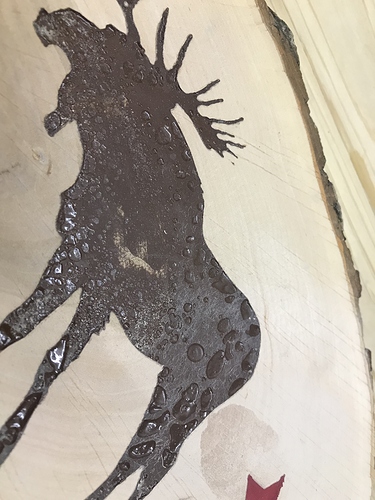 After some more tests on the ruined board I tried a sacound time. This time with solid 2 days of dry time befor the resin. Again some small bubbles and the heatgun seemed to make it worse again. So I stoped try to get rid of the air with heat and used a toothpick to pop them and this time it was much better, not perfect but acceptable. 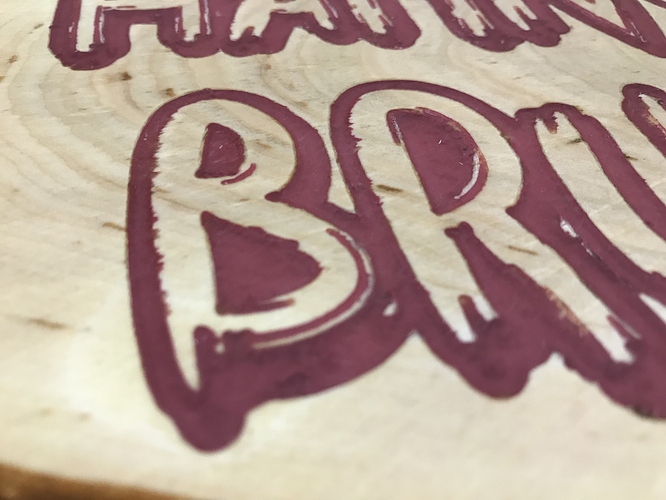 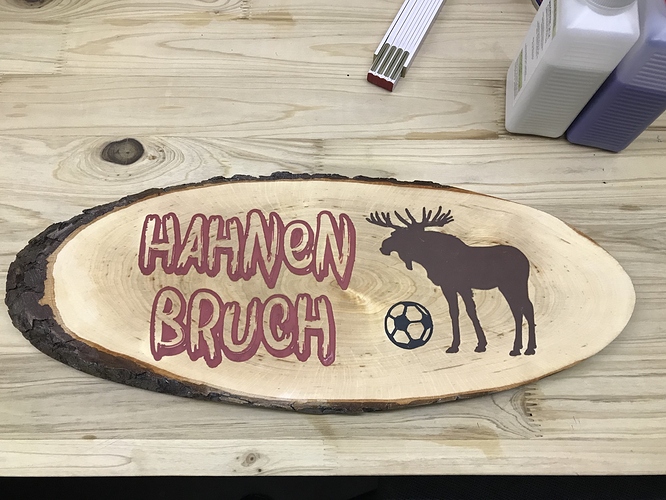 So my journey began to learn more about resin inlays

I’ve used a mist of isopropyl alcohol to pop bubble that rise to the surface. A gentle but rapid vibration might help rise bubbles (try a palm sander on table, etc).

It got to hot and burned the epoxy

Take a look at this. Should help you

I had a similar issue and I think it just takes some practice and patience with the torch. I use the propane version of the Bernzomatic and I’ve heard that the propane burns hotter than the other stuff (drew a blank on the other fuel). I’ve found that letting the epoxy sit for about 15 minutes then hitting with the torch on low helps.

the range under ideal conditions is only a couple of hundred C°, but conditions are rarely ideal.

What Resin/Epoxy are you using. Different types and brands can react differently under different circumstances.

Acrylic paint has very little heat tolerance. You were likely boiling the acrylic itself (which is just a low-temp, flexible plastic after all).

Was there a reason you painted first then put on the resin vs. dying the resin itself?

To seal the wood mix a bit of resin and brush it over the surface you are going to fill with epoxy. Brush it thin so it seals good and bubbles aren’t and issue. Wait the manufacturer recommended time for a second layer of epoxy then pour the remaining. Bubbles won’t be a huge issue then. Get a small torch instead of a heat gun. Heat isn’t what pops the bubbles, the CO2 is. Run the torch over the epoxy from a decent distance where it won’t actually heat the epoxy. Keep the torch moving, don’t ever just hold it right over a spot.

I used to inlay with resin. I went to Hobby Lobby and bought some that was designed for that purpose. They also sell some powdered pigment that give awesome results. The #1 key to using that, and I assume regular epoxy, is to stir very slowly. I mean Painfully slow. This prevents in introduction of air bubbles while mixing. Then when you pour it in the inlay, go very slowly to prevent creating air bubbles. I have be able to do that without creating any bubbles at al… well almost none anyway. What is there is easy to get rid of with the advice in previous replies using a torch. The flame should move quickly. Until you have it figured out just intentionally move it too fast and then look and see if it worked. If not slow down just a little bit and look again. repeat until you finally get the right speed. Better to be too fast with the heat than two slow and ruin your work. Also seal the area where the epoxy will be applied like @BrianJohnson says. If not then air bubbles can appear like magic. AND DON’T USE 5 MINUTE EPOXY! It generates heat when curing and makes it’s own air bubbles.

Thanks for all the suggestions! I will definitely try them out on my next attempts. So this was my first time and won’t be my last

that’s one of the parts I enjoy with my x carve that a will always learn new things. And I wanted to share my failure story to encourage others not to give up and try again as I have and the second time will always be better then the first ones

My wife liked it this way more than the filled matt look. On the try’s in between the two attempts I made small carves where I compared the techniques. She decided and she is the boss

and this was a gift to one of her colleagues, so totally her decision and design by the way

AND DON’T USE 5 MINUTE EPOXY! It generates heat when curing and makes it’s own air bubbles.

I use laminating epoxy with 60min pot life, to increase viscosity even further one can warm the epoxy up prior to mixing. It will mix better, trap far less bubbles and the cure time allow even the smaller bubbles to rise - so you can torch them away

What causes the bubbling?

I do table tops and pictures frames with it. I used to use torches but now I use a cheap heat gun. Less chances or burning the epoxy if you stay in one spot for too long.

My experience with epoxy is that the substrate needs to be carefully sealed. I would call the manufacturer of the epoxy for help. I have found the folks I used to be very helpful.

I have a vacuum setup and use it for this purpose. It is incredible how much air is contained in the epoxy. During the degassing it boils from the air leaving and not from heat. I have found it to be good but not the genie in the bottle. Surfacing attention must still be paid and a torch is a requirement.

During the degassing it boils from the air leaving and not from heat. I have found it to be good but not the genie in the bottle

Quite true, one do get away a fair bit of the air bit any minute remains will be “amplified” too which may not have the buoyancy to rise by itself.

What causes the bubbling?

In my limited experience (which is only one time so far, maybe two)… over-agitation when mixing the epoxy. How you pour might create bubbles also. The 5-min epoxy doesn’t give you much time to work (allowing it to settle) on larger jobs. It might also out-gas during curing, it’s designed for repairs more than craftwork.

How much vacuum do you apply – Shop Vac or real vacuum chamber setup?