Downloaded the trial of PhotoVCarve, had a few goes with the VGroove maching a picture despite changing all the settings and using different angled bits i didnt get satisfactory results

So i had a go at grayscale relief, which i think turned out great. I used mdf which probably isnt the greatest material for it

Gcode was imported into easel.
The only thing that photovcarve could do with is a roughing pass to clear out large areas before the detail work, so i used 1/8 inch bull nose and the carve took 2 hours, i would have liked to have a smaller bit but the carve time would have been close to a full day.

3d reliefs is on my list of things i would regularly but not sure i would invest in the Photovcarve program though, will have to try a few alternatives. 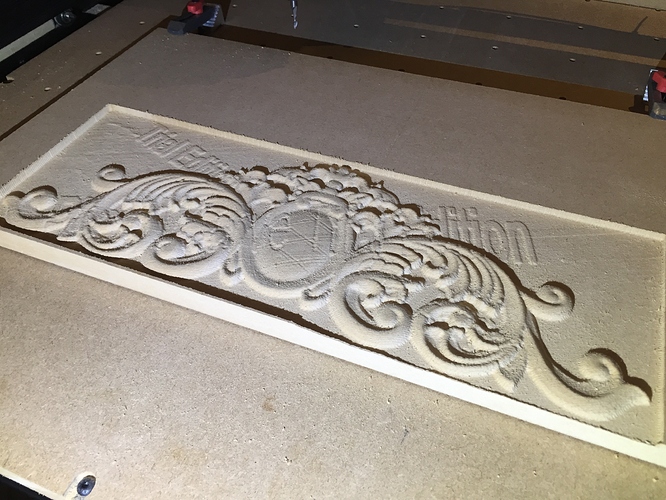 OK…I’m confused. You mentioned grayscale relief. Is that a software program? Or is that a setting in photovcarve?

I don’t want to have to buy photovcarve either but if it is the only thing that can do what I need, I may not have a choice.

Same or similar to a Depth Map image.

I think you got very acceptable work, using a program that doesn’t cost that much compared to vCarve, Aspire or Autodesk ArtCAM. I was thinking about getting photovcarve just to get picture reliefs (which is much easier to accomplish in aspire which I don’t have).

Aspire is a $2000 program. WAYYYYYYYYYYYYYYYYYYYYY out of line for me. I would consider photovcarve but I find no tutorials on how to create picture reliefs or 3d carving.

I’m a hobbyist and make stuff for family friends etc. Even Vcarve is a little steep.

That is a good point, I forget myself about the desktop version… and oddly enough, 99% of the stuff I do would still be in line with desktop version specs.

You make a compelling argument Robert but Vcarve does not let you import color photographs and
create 3d reliefs. Or does it???

I would love to make 3d relief carvings for my family.friends pets. People love their pets and if I can carve their actual pet…wow…that is just cool!

Plus everything else you can do with your personal CNC machine!

Thanks for the kind words Phil. After a few more iterations in that thread, I’ll make a new post for it.

Some I had to shrink or I get that out of memory error. Around 1100x1100 seems to be the magical area.

Just wanted to let you know my antivirus will not let it execute.

not surprised at all. it’s not digitally signed.

what antivirus do you use?

it’s open source. you’re welcome to compile it yourself if you’re the least bit concerned.

Scratch that… the update I pushed is crap… Will fix in a bit.

@PhilJohnson. Sorry for the bad release. Release v1.1 now has the correct files in the download
Those responsible for sacking the people who have just been sacked have been sacked

Once the number three, being the number of the counting, be reached, then lobbest thou the Holy Hand Grenade in the direction of thine foe, who, being naughty in my sight, shall snuff it

Can’t resist the Monty Python opening. They’re so rare nowadays. Have to take advantage when I can.

my antivirus will not let it execute

Did you unblock the file

I use Avast. It would not let me run the file no matter what I did. It’s ok, when I get the chance I will compile it and run it.

Good to know. I’m not commercial so I’m not compatible with AV… it’s a feature

Just to let you know, Avast sent the file home to the mothership for testing. It came back clean and runs fine now. I am testing it now.

can you tell me what the full output from java -version is for you?

and then paste as a reply.