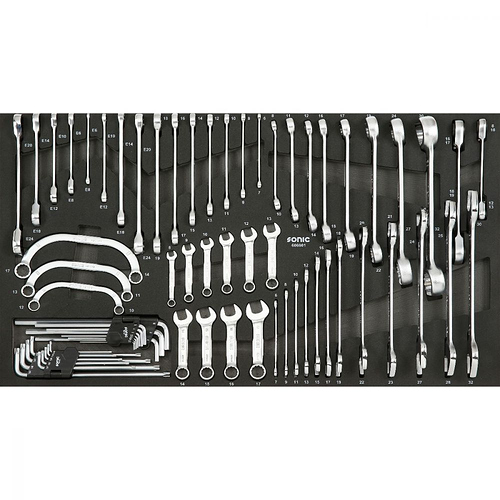 image1000×1000 170 KB
AFD
As the picture shows how would I go about tracing tools into Easel and what bit would be best for cutting the foam insert. Is this to much for Easel or can I take a photo of my tools and image trace them into easel. any help would be great.
1 Like
cg49me September 10, 2018, 9:08am #2

Personally, I feel Easel’s image trace currently leaves some to be desired. If you wanted to trace each tool one at a time, you’d probably be satisfied with the results, but if you tried to trace the entire design at once, you’d end up with a low-poly rendering. I’d make the entire design externally (i.e. in Inkscape), then import into Easel as either an *.svg or *.dxf.

As for cutting the foam, I’d recommend an up-cut bit. Most foams aren’t going to put up much of a fight, so you’re mainly going to be worried about getting the “chips” out. If your top edge is a little ragged, you might think about a compression bit.
You’re going to have to use a small bit (~1/16" or smaller) for the finer details, unless you oversize your cut-outs.

and there’s a tutorial on doing it in wood at: https://www.shapeoko.com/wiki/index.php/Carbide_Create_Photo_Tracing

3D modeling it allows for a more complex, multi-layered layout:

I would import the image into Fusion360 as a background and then trace them. It would take about 15 minutes to design it all.

I did something very similar. Part of the experiment for me was to see if I could do it with cheap MDF and coat it with something “foamy”. But the overall approach would apply to whatever material you were making the organizer from.

I traced the tools onto paper: 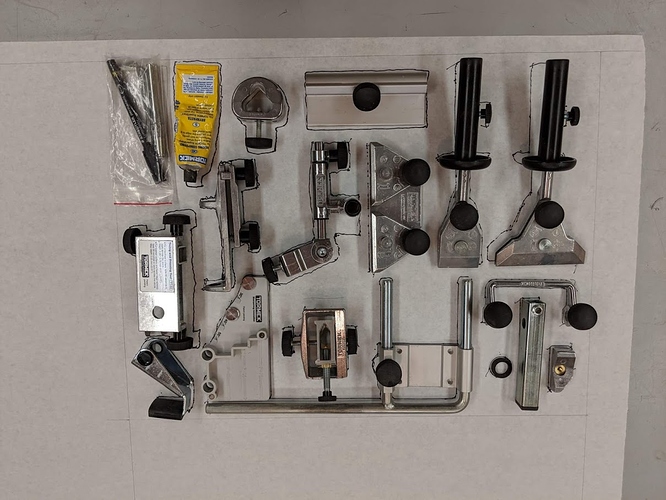 Then took a picture of the paper (without the tools) with a ruler in the picture. I brought that into Fusion 360 as a background canvas which I calibrated with the ruler. I then traced all the tools.

I then carved it out of MDF on the X-Carve: 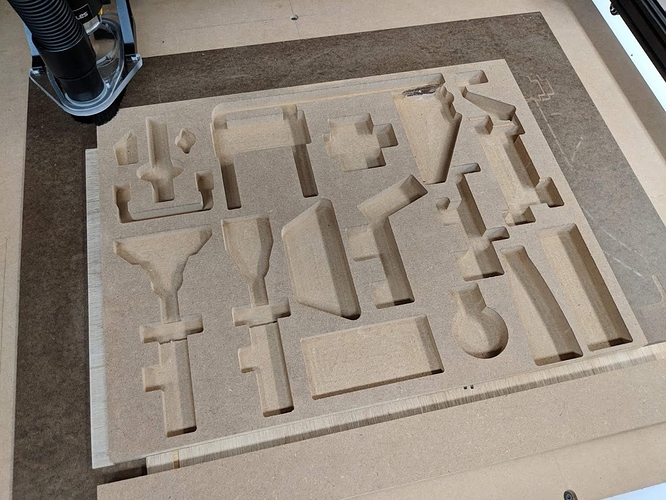 And finally I spray painted it with vehicle underbody coating for that rubberized effect. 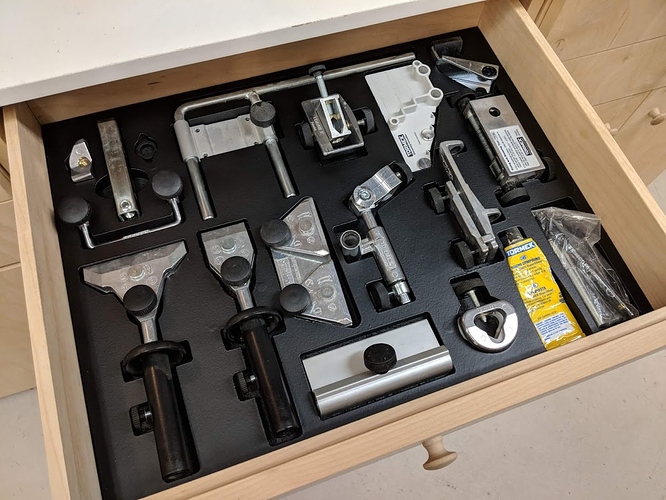 I wasn’t completely happy with the black coating, while it is rubberized it isn’t as cushioned/foamy as I was going for, but just decided to declare victory as it was “good enough”. I think the result ended up looking like Batman’s sock drawer.

I would also suggest that you keep the CAM toolpaths for each tool separate - I found that I had to go back and adjust the shapes for some tools a little and then I could recut just that part. I left the MDF in the CNC while I was testing the final fit so alignment/home was not disturbed and I could just tell it to recut a section I had adjusted.

My other issue is that I tried to make the recesses for the tools a little too precise which caused some of the above fitting/adjusting issues. An extra millimeter or two of clearance isn’t going to hurt anything unless you expect the foam to grab the tool and hold it in place.

The other thing is to make sure you add places for your fingers to reach around and grab the tool, and be generous with the sizing of them.

Then took a picture of the paper (without the tools) with a ruler in the picture. I brought that into Fusion 360 as a background canvas which I calibrated with the ruler.

This ruler trick is brilliant. I will be stealing it, thanks for sharing!

I start a LOT of projects with the ruler trick. Some tips: Using a camera with a wider lens up close introduces a lot more distortion than a more telephoto lens from further away. Also just putting a ruler on top of something and taking the photo isn’t as good if the object has multiple levels, same issue with lens distortion. So tracing an object on paper and then taking a picture of the paper works better. When it matters more I’ll put the paper on the floor and take the picture from a stepladder with a telephoto lens.

I’ve also been known to carefully place an object on a flatbed scanner next to a ruler and scan it - the scanner doesn’t have the barrel distortion that a camera has. I’ve used that trick to get a high resolution scan of the profile of some aluminum extrusion (had to be careful not to scratch the glass of the scanner).

Another trick if you’re got something like the contour of house siding you need to model is to use a contour gauge like this to capture the contour you want, then take a picture of the gauge with the ruler and trace the outline in CAD.

Thank you everybody!! I am just starting to use my x carve so the help is appreciated.

Hi Steve, I have the same tooling. Any chance you would be willing to share your file?
Thanks

Just wow. Amazing work done. Is this wooden board on which you made this shapes for different tools?

It’s in Fusion 360 - are you familiar with using it? Otherwise I’m not sure how I’d share it. This design is also matched exactly to my drawer dimensions, so if yours is smaller that’ll be an issue. This is custom enough that you might be better off stealing the technique rather than the end result.

I was looking for a cheaper/more readily available alternative to foam, so I carved the organizer out of MDF and sprayed it with rubberized vehicle underbody coating. So I consider the result acceptable though I didn’t get the puffy cushion effect I would have liked out of the rubber coating. Not totally sure whether the goal of cheaper was met or not after going through a couple of cans of the rubber coating, but regular paint might get closer.

A trick I do for image trace I find whatever image screenshot it with my phone and use the remove tool with the photo director app you can also adjust picture quality for a better trace I save and message the photo on Facebook messenger to myself then to inkscape then to easel. Yes it’s a few steps but the results are very precise!