It appears at first glance, that the available fonts in Easel are very limited. Is there any way of getting additional fonts (such as Old English and Times New Roman) in Easel?

I think the trick is to use the desired font in a local graphics program, then export the finished image and import it into Easel using the new vectorization app (which is awesome!). The text isn’t editable at that point, but at least you can use any font you’ve got this way. I’ve got thousands of fonts (literally) so it’s a big deal for me to be able to use the right one…

Can you elaborate on the process? I’m trying to import a font and image trace doesn’t work, nor am I seeing a vectorization app in Easel…

how do you verify it as Outline?
this is the message i get when i import it in easel. 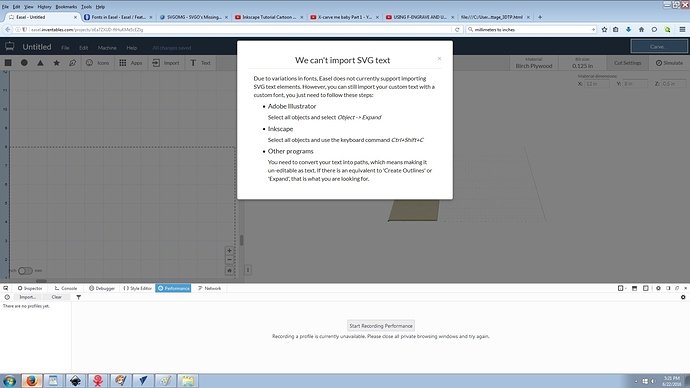 would you kindly please check and run the procedure again?

how do you use/open this on easel?
kindly give a step by step on how to use [http://www.vectorization.org/]
as well as the fonts. i would appreciate it a lot. thanx.

The vectorization app has unfortunately become extinct (that post is now a year old). It has been superseded by the image trace app. Create your graphic in the program of your choice, “Export”/“Save As” it as any compatible file extension, fire up the image trace function and trace the letters from the image. Once again, the graphic version of the text is no longer an editable entity inside easel, but once you have the right text, spacing, carriage returns, etc. the traced image is easy to resize.

how do i get the image trace app.?

@PhilJohnson is correct, as usual. However, there are instances where you want text but not the font. For example, if I wanted to make a Star Wars logo shirt, it would be unnecessarily complicated for me to try to find the Star Wars font for free download it (without getting a virus), install is, fire up Easel and type it, massage it to make it look like the logo, etc. I could just easily download an image of the logo I wanted and use the trace app.

Phil’s method is extremely useful for custom text scenarios as if I was going to make a custom Batman font sign for my son’s room and wanted it to say “The Nate Cave” or something like that. If you plan on making custom signs for your family, or for sale, this is the easiest technique currently available.

Keep in mind, the Easel software is evolving. I was very happy with the vectorization software and used it on dozens of projects. Now there are other tools that fulfill the same function. In fact, there has been some talk from the powers that be at Inventables that they’re looking into the font situation.

whats the best way to do a batman logo and alike using inkscape?
i tried the image trace on easel and i get corners on the curves. 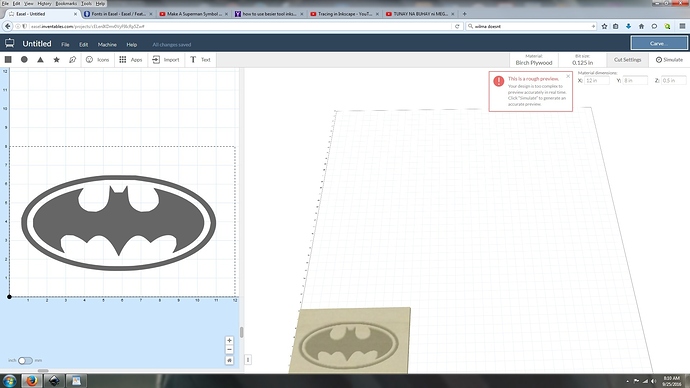 i know this is an old thread but based upon search i wanted to bring up another point on this topic.

i am doing a small series of pieces where i want to use different “hand written” style fonts carved on pine slabs. i already have a ton of fonts downloaded from dafont.com for different MS projects in college. It’s a lot of extra steps to utilize those fonts (typing it out in a text software, jpg’ing it, and then trying to image trace them into easel).

What i’m getting at is all it would take is being able to import our own .ttf files into easel and we will have access to thousands of fonts online and i could do everything in easel (mucho efficiento)

Am i the only one that’s had this thought? bueller?

so inventables has definitely seen it as a request? i just cant imagine it’s that difficult of a feature to add. maybe it has to do with where all the font files would be stored. but it’d be really nice to be able to access all my files in easel in an organizer as well

so on this topic. when i pick a font i like, type it out and jpg it; i import to easel on image trace. The problem im having is it doesnt look like the font by the time i go thru all these steps.
im not sure how to go about making the words come out as sharp as i want with image trace. is there a software or something web based to accomplish this?

I’m still pretty much a noob with Easel, but figured out fairly quickly that the font capability was very limited. Although it’s another piece of software and a little expensive, I really recommend Vectric’s VCarve to take care of any text needs. I already had a copy for rotary engraving, so was familiar with it’s operation, but I think it’s intuitive. It has the benefit of being able to do v-carving with a v-bit and you can use any font installed on your machine. If you are doing any serious text work, this is a must. And while it certainly isn’t a word processor, it is SO much easier to format any complicated text. Finally, VCarve’s ability to import stl files gives me 3D carving capability. Work in VCarve, save the G-code using the Easel post processor (which works well) and then import into Easel and carve. I guess you can also use the Universal G-code Sender, but I like to keep Easel handy for quick and easy carving tasks, so it’s easier just to use it.

I usually just type what I want in Word, use the Snipping Tool to highlight and save it, then import it. I realize this may be more convoluted than what others do, but it doesn’t take me very long at all. 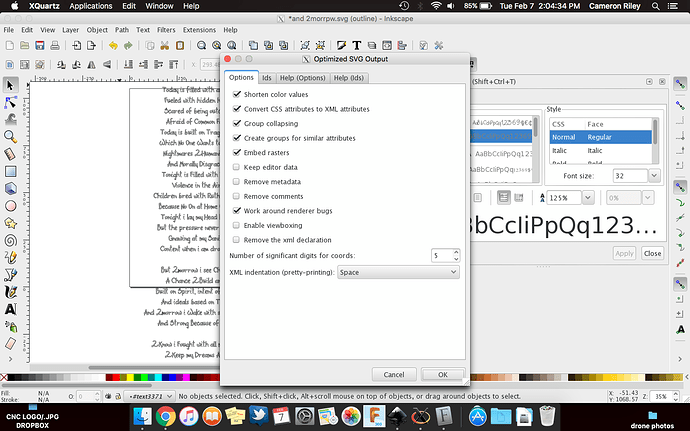 any tips/advice as far as these output settings go?

also i want to take some scans of handwritten text/drawings, should i go about it the same way as this?

im saving them as optimized svg’s and they’re still not importing in easel? its throwing the svg text error regardless

i thought i did everything correctly as to saving it optimized and everything, if you know why it isnt working in this case for further projects i’d appreciate it.
thanks for your time

awesome thanks. yeah im still trying to get the hang of inkscape its got the old MS Paint feel with a lot more features haha. That pdf write up is a huge help, will keep it saved for when im setting up text.
really appreciate you taking the time to explain it further