The fan also doesn’t turn on when it’s plugged into the power supply either.

The software does recognize the machine when I plug in the USB cable, but I can’t move any axis.

I did remove the g shield and re installed it thinking the pins weren’t in all the way but that didn’t work either. I also checked all the wiring and it all seems connected properly.

I’m wondering if the g shield is the issue?

I think you have a wiring problem.

You did make sure that the input setting on the power supply is set to the correct voltage for your area, right?

I checked the voltage and its correct. I removed the wiring and reattached it and still not working. I rewetted the video and put the red wire into the right spot and same with the black wire. The lights work before i plug it into the power supply but don’t work after I plug it in.

Could it be the actual wires themselves? Seems unlikely.

I think i’m missing something really easy, maybe over thinking

I can’t remember if it is what’s recorded, or just what I do, bu I always power up the power supply before hooking up the USB cable. If you do this, do you have anything happen on the board, like has been said, you should get the blue light and the fan should move.

If no, you may want to test your power supply wth a multimeter to make sure it is spitting juice out.

The 24 volt power supply only provides stepper motor power, power to the blue LED, and power to the fan (the original spindle if you have that). The USB cable provides logic power to the Arduino and the gShield logics.

I plug the USB cable in first and then turn on the 24 volt power supply so that the logics will be up and running prior to having motor voltage, but that is just my personal preference. I don’t think it makes much difference either way.

It’s possible that you have a bad fan and blue LED circuit, but it’s more likely that the 24 volt supply is not working or there is a wiring error.

As Steven suggests I would measure the voltage output of the power supply with a voltmeter.

Measure the output of the power supply to see if it is 24 volts.

I took a photo. The red is connected to the red on the fan and inserted into the VMO on g shield. The black is inserted into GND.

The read and black on the other end is connected with red connected to V+ and black to V-.

I have the dewalt spindle/router so i don’t have spindle wiring.

When the power cable is plugged into the power supply but while it is off, the gshield lights up. 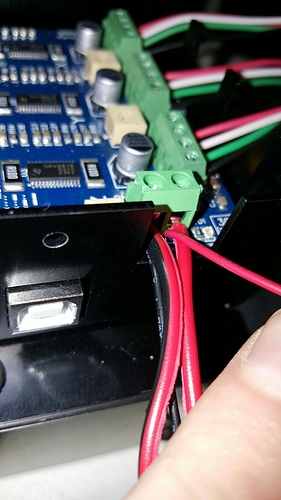 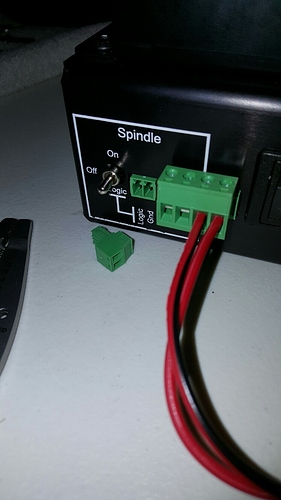 How do i measure the output of the power supply? I’m not an electrician so i apologize for my lack of knowledge.

You also have to hook up the fan wires (red to red) (black to black) at the gShield.

So at the gShield you should have two red wires not three.

At the power supply you should have one black and one red.

I can’t tell from the picture what you have wired up.

The fan is wired red to red and black to black. The black wire looks red, but is colored half black, it’s not an all black wire, kind of funky. There are only 2 wires going into each terminal on the g shield. 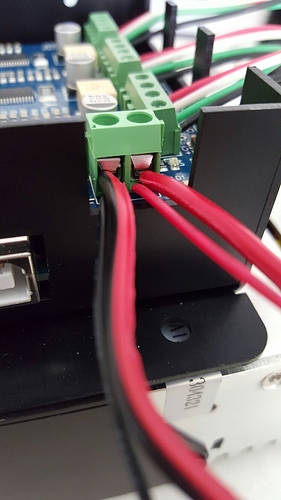 The dual color wire has really think coating on it.

I tested it and it is showing 0 for volts. One thing i noticed is that i had the power on the power supply for a couple of minutes and the side of the machine got really warm.

Everything turns on accept the lights on the gsheild once i connect it to the power supply. It’s as if everything wants to work together but there’s something just missing

Unhook the wires from the terminal block on the power supply.

Set the mult-meter up as before with DC volts, 50v scale. (looking at your picture) Place the red probe on the rightmost terminal of the power connector and the black probe on the terminal to the left of the red one.

There was no reading. I did find another thread where someone had a very similar issue. When i turn the power on the left side of the power supply gets very warm very fast. In that other thread the person ended up needing a new PSI? Not sure what that is. I wonder if that’s the issue. H

With the wires disconnected, there is no load on the power supply. It should put out 24 volts. I think yours is dead.

I agree. I’ll have to get a new one. Thanks so much for helping me out. I greatly appreciate it.

UPDATE: The power supply was the issue. I called and they sent me a new power supply next day! Everything works now. Thanks again for all your help.