Getting the limiting switch to work (Resolved)

I just finally got my xcarve system up and I am trying to get my limit switches to actually limit the system however when I do the setup the Z axis goes up and doesn’t stop until I tell it to. Thankfully the switch isn’t damaged as I’ve tried looking over a few things. I am totally new to the CNC scene and have general electrical knowledge so trying to find the solution is coming up short. Here is a snip I took if anyone is curious. Any support is welcomed thanks. 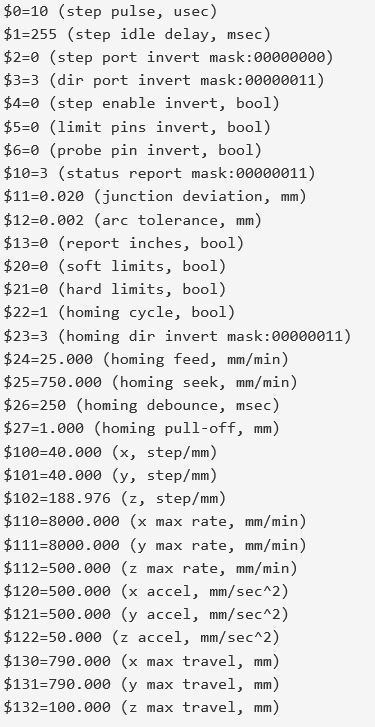 @JosephJackson
The grbl settings look good. If you have a terminal program such as HyperTerminal or Putty (or the Arduino IDE) I can help you verify the homing switches.

I hate to say it but I just found my error. I was the idiot that looked at the video and didn’t listen. After listening I got wires switched. Now I am off and running now. Thanks for your reply Larry. Just for personal knowledge how would I go about using the Arduino IDE?

The Arduino IDE is a development platform for the Arduino. Its primary purpose is to provide an easy to use development system for programming the Arduino family of single board computers.

A part of the IDE is a terminal monitor that allows you to interact with the Arduino through the USB port as if the Arduino was a serial device hooked to your computer. It’s just a straight forward method of talking directly to grbl so that you bypass any possible program errors in upper level software like Easel.

When debugging I like to remove as many variables as I can.

The Arduino IDE can be downloaded and installed on your computer. It’s free.

I believe I downloaded that when I installed the drivers from the Arduino site. Suppose its of to learning I go then. Sadly its going to be a learning curve.