I am planning to upgrade my belts and was wondering, for those who have upgraded, does the GT2 9mm upgrade make more sense, or the GT3 (6mm?) upgrade?

If I go with the 9mm GT2 I’m replacing pulleys, wheels, clips and most likely interfering with my X-axis stiffening mod since the upper plate on the X will impede the new wheels…

Both are 20 TPI, so it’s really width vs depth the best I can tell, unless the GT3 is wider than 6mm.

Been having issues, even with belt tension confirmed set at 3.5 - 4, with the motors missing steps by jumping teeth. I’m leaning towards the GT3 since the teeth depth is greater vs. the GT2 which just means more width.

My jumping typically occurs when working in Oak and hard Maple, it’s not consistent. I’ll post my depth and speed settings when I have my notebook again, but i’d like to investigate upgraded belts before I do anything more drastic…

Since you have your current belts at the correct tension, you have to be cutting seriously hard to skip a belt / pulley tooth.
I would imagine the motors would skip steps first before the belts will.

What evidence makes you think its a belt tooth that is skipping?
Whenever your machine “messes” up, how far off is the actually path vs expected path?

A skipped X belt tooth will lead to an obviously visible screwup.
A skipped Y (single) belt tooth will be harder to see; the part may just not be “square”.
Anybody care to guess the chances of BOTH Y belts skipping a tooth?

Maybe the only way to prove what is happening is to make a mark on the belts and pulleys.
If they always match up, but you still are having issues, then the motors are in question.

I’ve had it happen 2 times, it’s been the X, the evidence, in the each case, was that the teeth on the belt were actually deformed. I assumed the first time perhaps a belt defect, but the second time an inspection of the belt showed the same “mashed” teeth, as if they were stationary and the pulley slipped and deformed them a bit as it jump to the next set.

In the first case I didn’t hear or see anything, the second time it was moving across the X and I saw the belt “hop” slightly on the left side (had hearing protection on) and could immediately see it had screwed up the cut…

I figured my best bet was a different belt than the first two times (stock + 1 replacement) and GT3 seemed to make more sense. 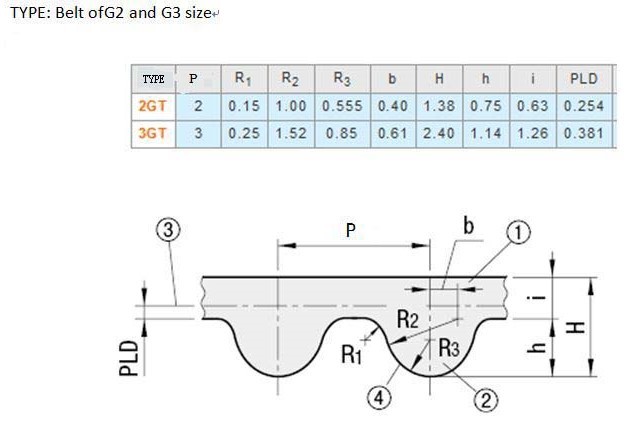 The data above is from Openbuild’s GT3 page.

Going with GT3 means you also need to change the default $100 & $101 to accommodate for the new pitch.

This has been also discussed here:

I came here thinking about upgrading from Gen2 to Gen3 as well.

I’m a bit confused about this reply @EliasPolitis. And please, correct me if I’m wrong. But I get the feeling there is a little mixxup between GT2, GT3 & 2MGT & 3MGT (or 2GT & 3GT). GT2 & GT3 define the generation, whereas 2MGT & 3MGT define the teeth pitch ( P ).
The table talks about type 2GT and 3GT, which defines the pitch ( P ) distance and not the generation. Going from 2GT to a 3GT results ins also changing the pullies and the whole shabang, right?

And from what I understand going from a GT2 2MGT 6mm to a GT3 2MGT 6mm needs no changes on the machine. Other than re-calibrating after each belt change of course. The GT3 is 30% stronger than the GT2 since they are from different materials.

Can anyone confirm my story?

Dang, replying on a two year old thread… thought it was 6 days old

Thanks for the (double) confirmation @PhilJohnson !

For anyone reading this in the future, @TimRomkes had it mostly nailed other than the fact that no calibration is required unless the pulley is changed to one of different diameter (and therefore circumference).

Distance travelled per micro step is not a function of the pitch in any way, but rather of the circumference of the pulley.