I changed over to the Openbuild GT3 Belts a little while ago when i also changed to Nema 23 Steppers. I’ve found the belts to be a little unreliable. I get 2 months roughly out of a belt before it breaks.
I didn’t have this with the GT2 which came with my X carve. I’m not sure if this is me over tensioning the belts or a poor quality belt.
http://ooznest.co.uk/3D-Printer-Mechanical-Parts/Belts-Pulleys/GT3-Pulley-Timing-Belt-Kits

Ooznest is the UK distributor for Openbuilds. Is there a higher quality GT3 belt on the market? I’ve looked but haven’t found anything. 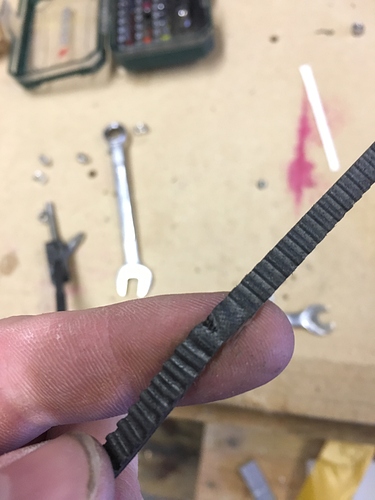 You went to a GT3 pulley before running the GT3 belts?

I bought the pulleys and belt as a kit from openbuilds along with the steppers. The belts seam to mesh nicely with the pulleys. I thought I’d over tighten the belt

Have you solved this issue ? I had the same thing happening. All parts from openbuilds. Went with the 9mm belts and all had been good.

Ya I got the link from you a month or so ago and they are on!

Ya. I still call it an x-carve but there’s not really much left of the original lol. I just finally got your waste board finished up and I think I’m done for a while.

I’ve gone for a screw drive set up. Just working on rebuilding the machine today. The GT3 belts from openbuilds just didn’t preform for me.