Perhaps more of a Inkscape question, although hopefully there are a few Inkscape pros around that can point me in the right direction. Or let me know where I can find what I’m missing.

My daughter hand wrote “Kinderfest 2016” for some wooden pins I’m making, for well a Kinderfest. And perhaps I’m doing something wrong but I’ve gotten an outline of the letters in Inkscape after scanning and path trace bitmap and object to path. The outline letters are not going to work for the size I need in Easel. I’m thinking if I can get a single line trace of the letters I can get the small size I need on the pins.

You could use F-Engrave (or V-Carve if you have it) to v-carve the outline. Attached is a DXF file (vectors) of your image and a v-carved example… 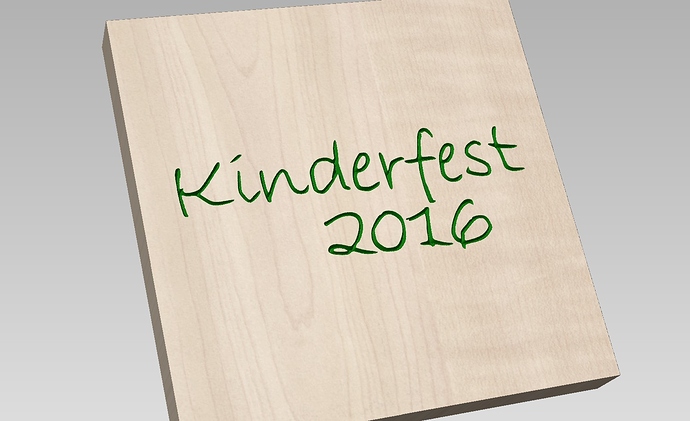 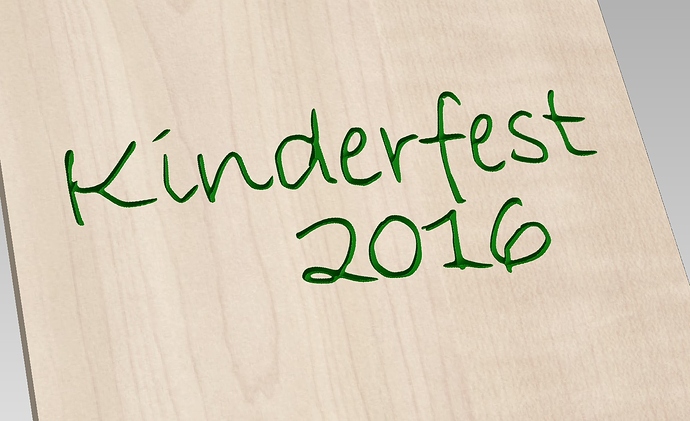 Have you checked out F-Engrave? You could use that to generate the G-Code and import that code into Easel for cutting.

Another option would be to import the image into Inkscape on one layer. Adjust the opacity of that layer down to about 50% or so. Then create a new layer, and use the path tool to trace the lines of the letters using a stroke width of 1.

I haven’t tried F-Engrave yet - thank you @ErikJenkins and @BradT.

I opened @ErikJenkins Kinderfest2016.dxf in F-Engrave and saved the G-Code file.
Imported the G-Code file into Easel and received the following error: “Invalid G-Code Line 76: G91.1
The file contains invalid G-code syntax. You must use one of our official post-processors in order to import external gcode.”

@BradT thanks for the additional option. That worked great. between smoothing of the line and width of 1, I was able to get an actual path from the letters!

if you’re really set on making it single line, you’ll probably be better of manually tracing the letters with the path tool.

People always seem to think software has a magic button that does all the work for them. Sadly it is usually slightly more complicated than that.

If you have Corel Draw, this will work well for you:

It might not be ideal, but if you have CorelDraw you can use the technique below. It works pretty well. [image]