Has anyone sanded the top part of the dewalt 611 plastic housing?

Has anyone sanded the top part of the dewalt 611 plastic housing so that it will sit lower in the mount?

I am trying to engineer a dust boot and saw from a video that installed the Kent dust boot to the xcarve. and they had to sand down the top casing of the dewalt 611 (on the back side) so that the 611 would sits lower in the mount.

I am asking if has anyone has done this and is there something behind the area being sanded that needs to be avoided/watched for?

Attached is a pic similar to what I saw. 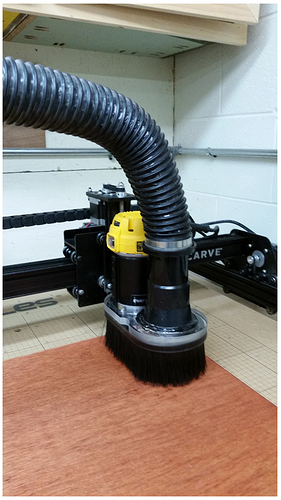 I think other have taken a small notch out of their Dewalts to make them fit better. I think others have also just turned the router in the mount slightly to avoid the obstructions.

I don’t own the Dewalt, but if you search on the forum I believe there are a few post about this.

I have sanded the plastic part (yellow) of the Dewalt to ensure the travel was there for the Z-axis movement. No issues with performance.

Yep, I sanded it so that it would fit all the way down in the mount. It didn’t take much and there were any issues at all.

In my case, I almost forced myself into having to sand the case for the travel as I had cut the opening at the bottom of the mount for the push button for the collet changeouts. I suspect if I had rotated the housing to a place where the movement was there and then cut out the opening in the mount then I would not have had to do any sanding. It works either way.

Can I ask for clarification, why do you want the router high. I would think you would want it a low as possible for more z axis travel.

Am I the only one who chose to cut away part of the aluminium so the dewalt would pass without touching?

please explain or show a picture. I am not sure I understand the setup.

I put a MOD several months ago in the tip area. I milled the back of the holder bracket .125 deep so that the DeWalt can bottom out on the holder. I needed this as I have my wasterboard UNDER the rails and needed all of the depth I could get. I also have a MOD on the forum about that too.