I know I have a dedicated build thread, but this project in my opinion deserves its own thread! Never have I gotten so much satisfaction by making something this cool! This is by far my favorite project and my biggest one yet! I learn’t quite a bit building this and I am now stuck starring at this thing instead of working on more projects! I wanted something cool for my workshop and something that is portable that I could bring around with me. Anyways enough talk here are some pictures. I basically set up to turn my logo into a 3d MDF Sign! Halfway through building it I decided to take it even further and installed some RGB Led’s to give it that extra wow factor! Pictures just don’t do this thing justice! I really wish I had a real Camera instead of my phone! I was going to post a video, but I don’t want to degrade this sign by posting a shitty quality video with my phone. These will have to suffice for now! While you guys look at this I will continue to stare at this sign in amazement. I may post more pictures of the build if requested but for now here is the finished product

The sign with the lights on and the LED’S turned off. 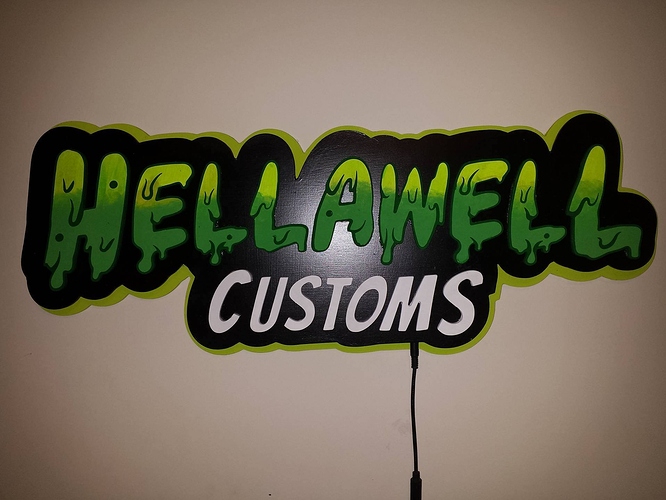 Side view to appreciate the 3D Effect of the sign. (I kind of wish I had the patience to wait and buy some black strip LED’S Instead of the white. 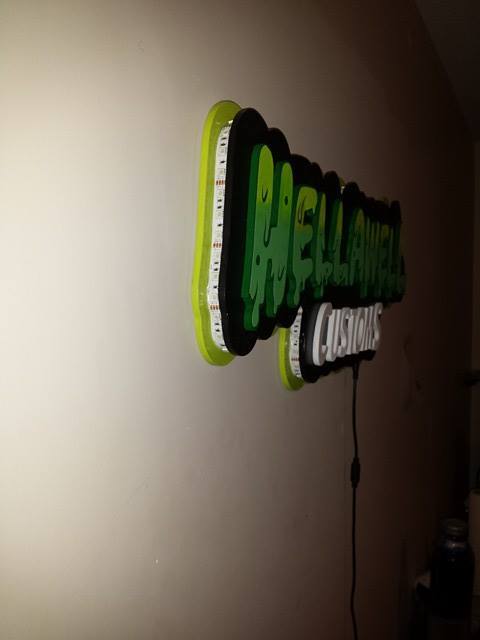 The Controller I used to control the lights I actually had to butcher and resolder dome stuff so that it would fit in the sign. I did this to keep it portable and clean. The remote I actually have setup so it controls the sign, it also controls the leds under my bed i made and the leds in the kitchen and last the LEDS in the theatre room. It has 4 different zones you could call it that it can control at a time and the range is quite far. I can be outside across the yard and still control them. Don’t ask me how I know that 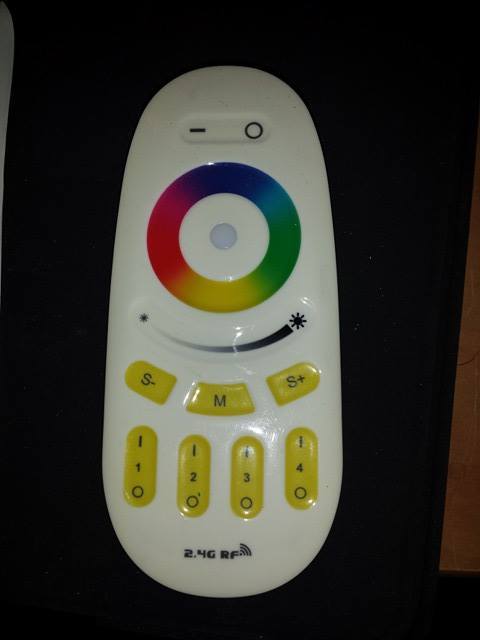 My Phone unfortunately takes poopy pictures as you can see, but nonetheless here are some pictures of the sign in different colors The lights are off but I turned the flash on my phone on to get a better picture. The Apple green background actually makes it look like the whole sign is diffused and glowing it is definitely allot cooler to see in person, once again these pictures do not serve this sign justice. 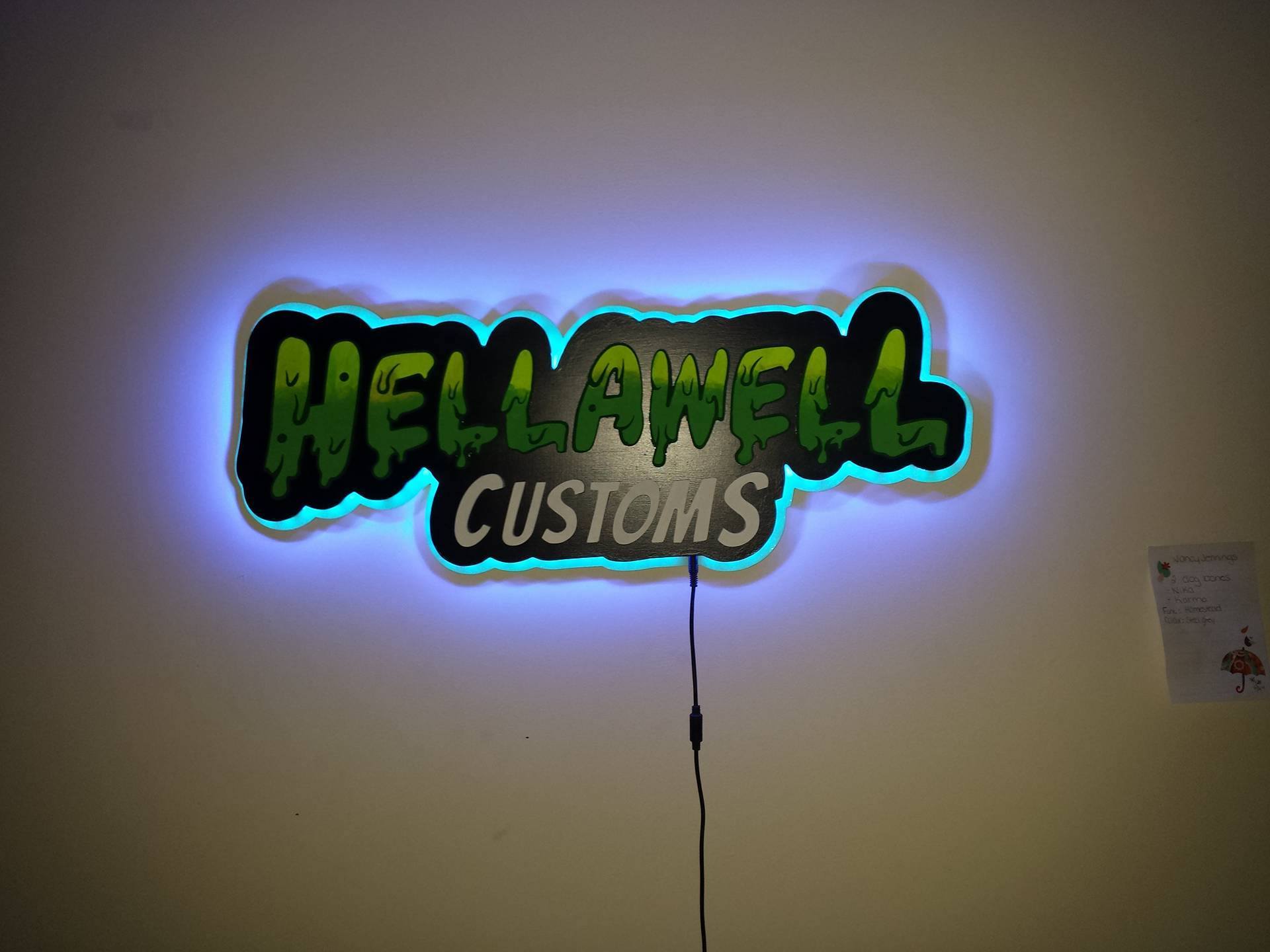 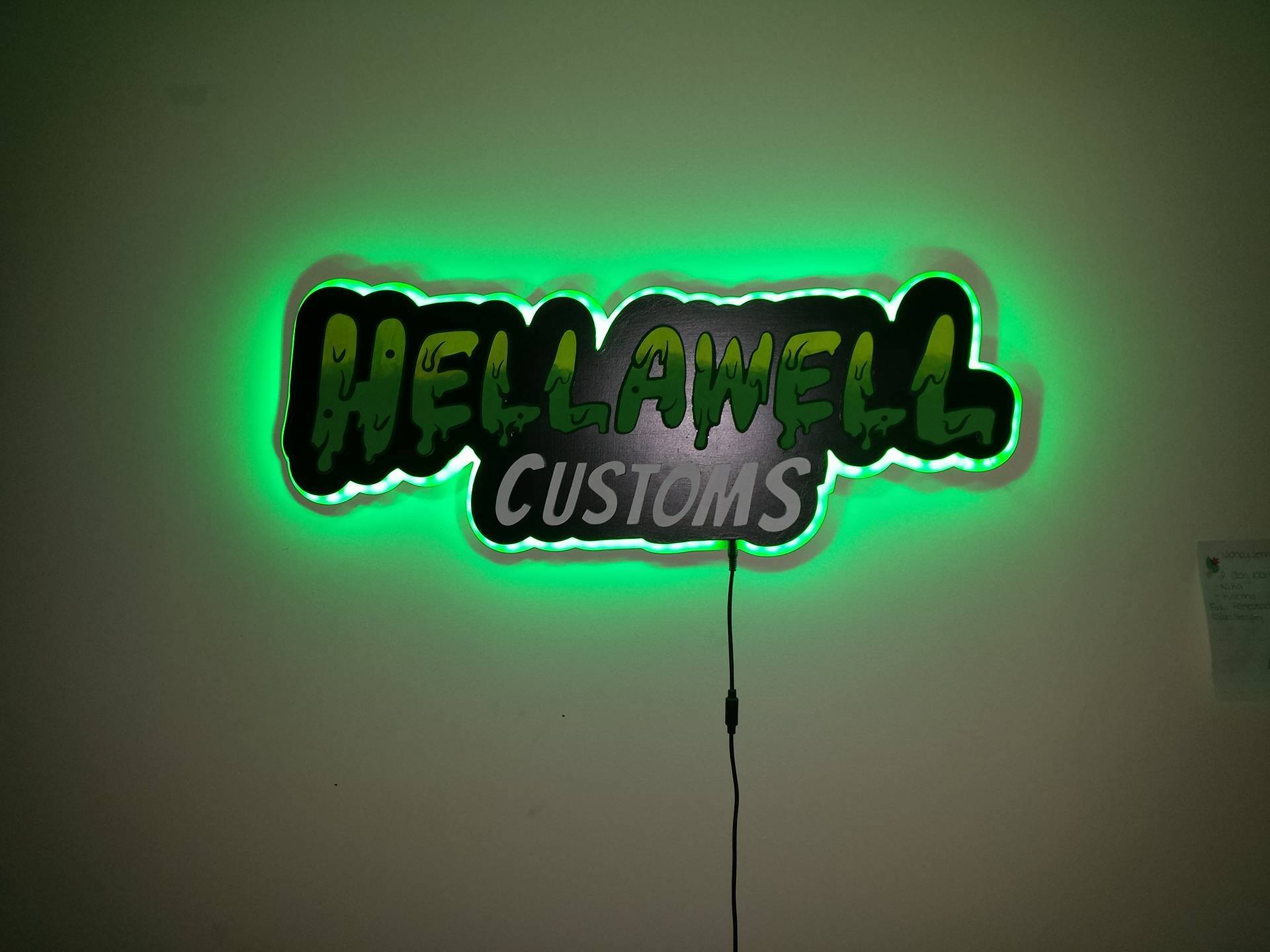 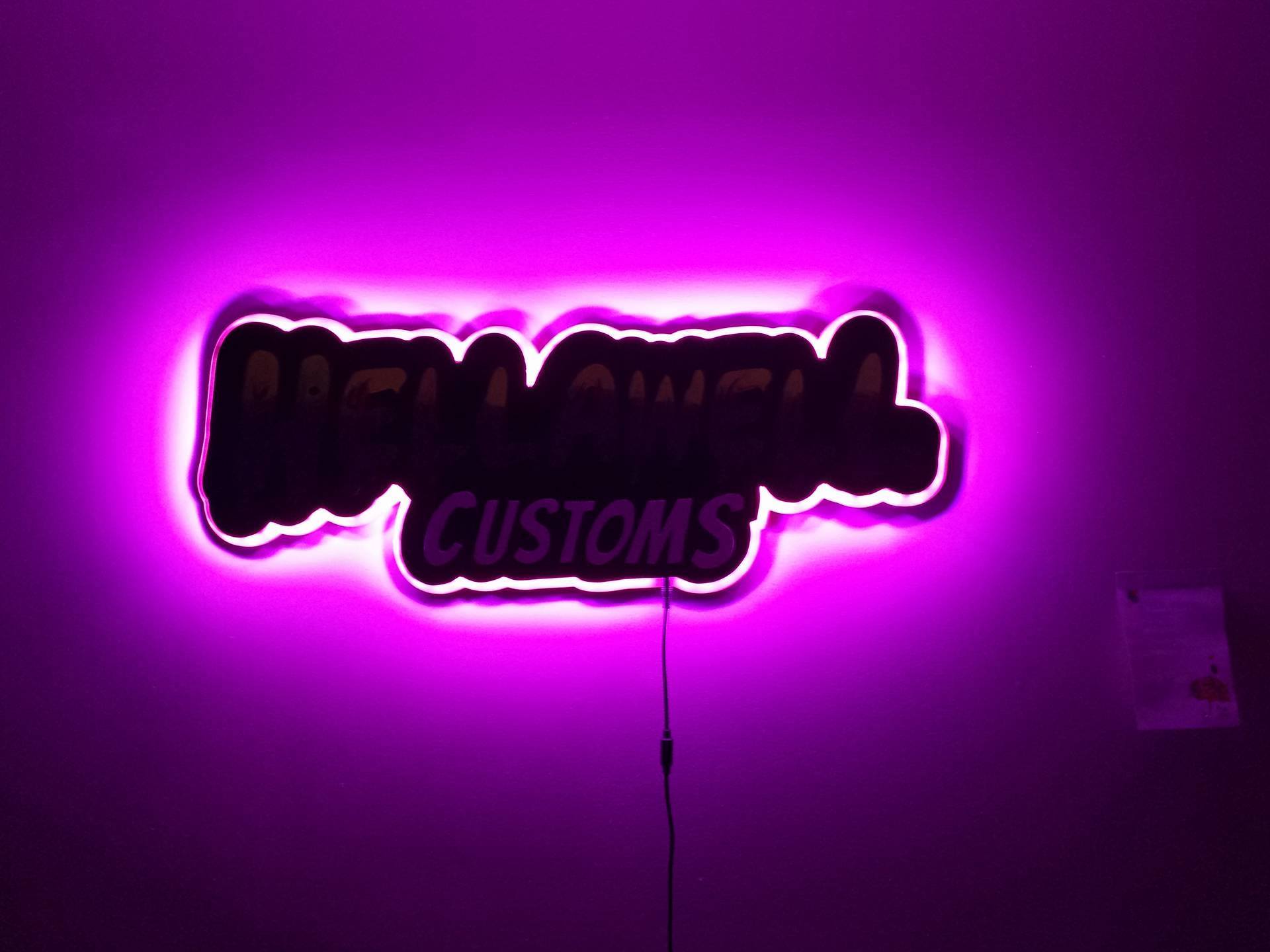 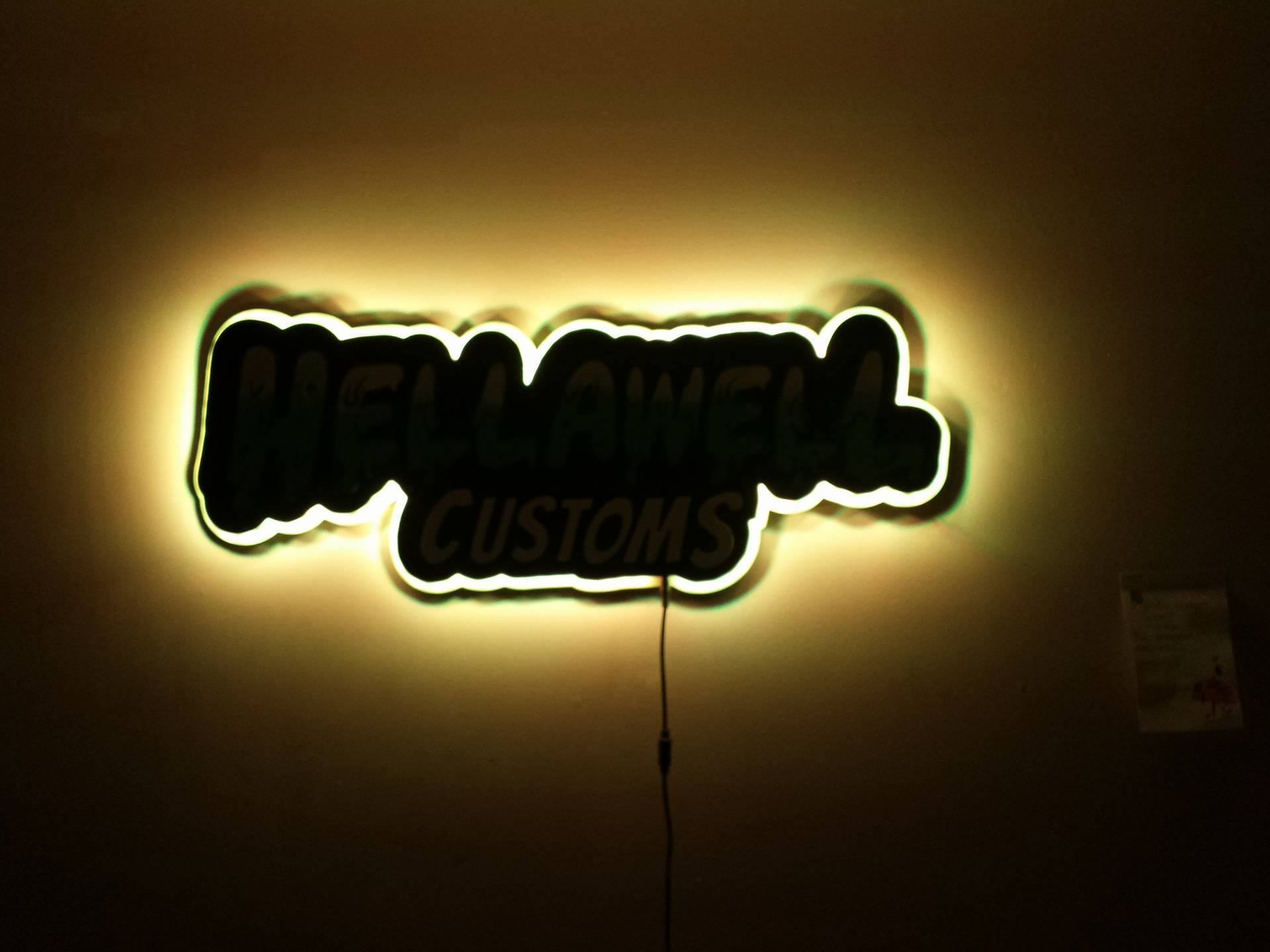 Very cool! Hard to see how 3D it really is, except for that one shot from the side. If you spaced the lettering off the black back round, there is many ways to back light them. I sometimes solder RGB led’s different on a second strip, so I get 2 different colors going on at once. This setup we did in a trailer “man cave”, alternates and flashes between blue and green with a RGB music controller. Turned out pretty cool! 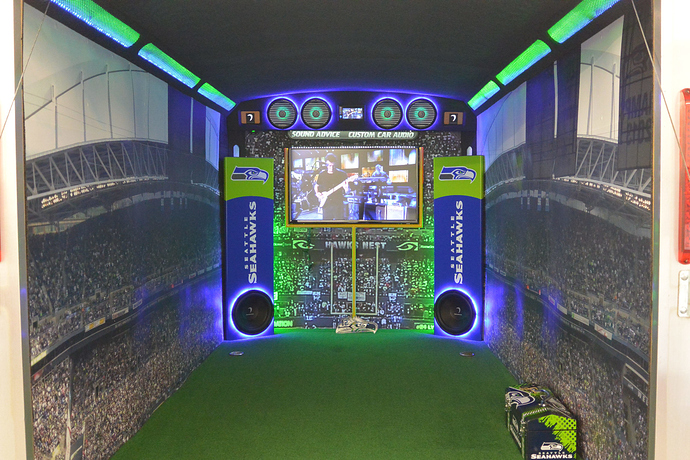 Sorry I’m not properly educated with all my D’s

I just meant it’s not just some flat sign.

Ya I contemplated adding a space for the letters and backlighting those aswell with a different color but opted to keep it simple. I’d like to Maybe explore this and do a second sign that is a bit more complicated. I really wanted to use neopixel strip but I got impatient and just used the strips I had on hand.

I believe, once you stack 3 or more layers, it’s moretherer than 2.5D, it naturally becomes 3D. Just got to use a router afterwards, to make it official. 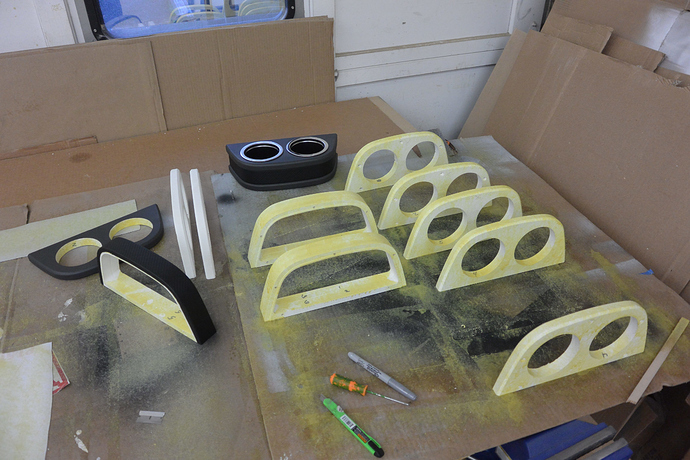 Holy Crap!! That is Awesome!!!

so how did you do the logo on there was it printed , decal, or air brush?

Basically painted all the letters the dark green then used a vinyl cutter for the blobs or drips, whatever we want to call them. Put that on primered painted then removed the vinyl to show the dark green.