I’m playing with Fusion 360 and trying to figure out how to engrave this image. I’ve got it most of the way there I just would like to know what the best way to clear out some material. 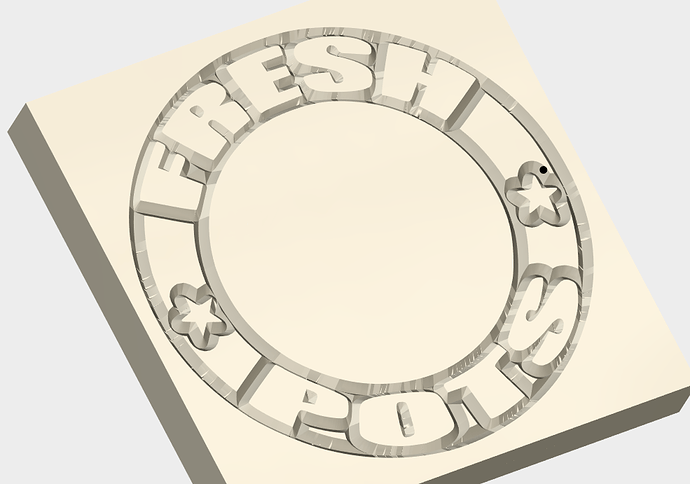 I want to clear out the material on either side of the star and the small bits between the POTS. I’ve tried pocketing and leaving material, but it results with flat walls and not always clearing out all the places anyways.

Sorry if this sounds confusing, hopefully this makes enough sense!

I haven’t done this but can you go into sculpt mode, or patch, not sure which, select the faces you want gone and then drag them down to the same height as the rest of the bottom?

I would have to agree fengrave would be a much simpler solution for a project like this.

V carve does this automatically.

I haven’t done this but can you go into sculpt mode, or patch, not sure which, select the faces you want gone and then drag them down to the same height as the rest of the bottom?

So I should have mentioned, this is a preview of the CAM operation. The geometry was selected from paths and then this is all the engrave operation cleared out.

V carve does this automatically.

fengrave would be a much simpler solution

Thanks for the suggestions, but I would like to try and use Fusion, instead of learning another program. I’m already proficient with Inventor, so Fusion is pretty similar.

I’m going to attempt to model the geometry and use some 3D operation, although it would be nice to just about able to do this by selecting paths.

I have not, that will be my next plan of action. I knew a few people here use Fusion 360 so I thought I might get a quicker response.

Rusty! I haven’t used the ‘engrave’ cam strategy in 360 yet but have you tried any of the 3D ones vs 2D? Fusion360 is so powerful that sometimes projects like this seem more complicated then maybe you think they should be…a worthy pursuit though, I’d be interesting to hear how you resolved this.

FWIW - Side note I know that sometimes after clicking a toolpath chain it doesn’t always select the correct area to remove material from…clicking the blue arrow that appears along each toolpath chain will flip it.