I’m getting ready for a show right now and while cutting out cheese board I managed to spectacularly fry my Spindle and VFD.

I’m trying to analyze what happened in order to learn from it and ensure it never happens again but would appreciate some input from the group.

I was using a profile toolpath on the outside, conventional direction (counter clockwise), 70ipm, .125 doc. I had already cut out 2 previous to this one before it failed. The bit is realitively New. The long grain cuts were at a angle to the grain so the bit was pushing into the endgrain. On the 5th pass down it looks like the cutting edge of the bit started grabbing the walnut instead of shearing it off causing the failure.

Should I have decreased the doc and slowed the ipm on this type of cut as a rule? Or am I missing something else? 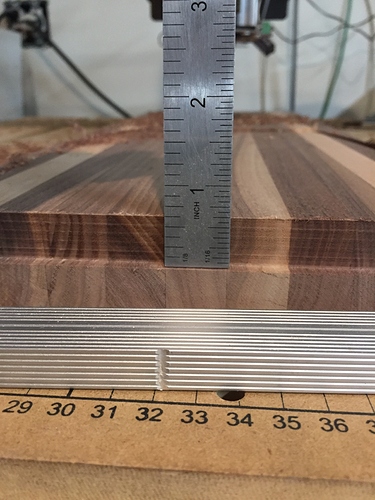 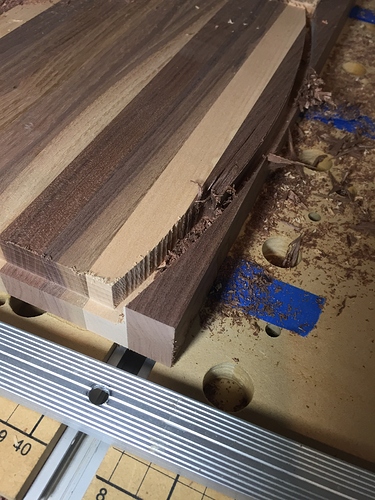 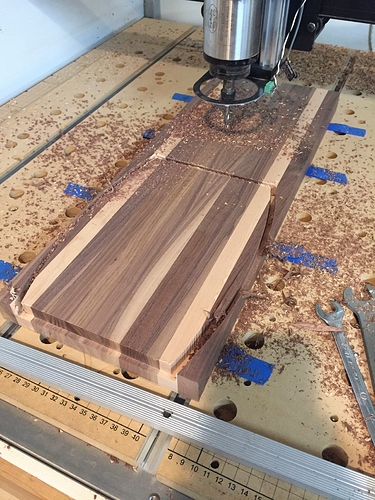 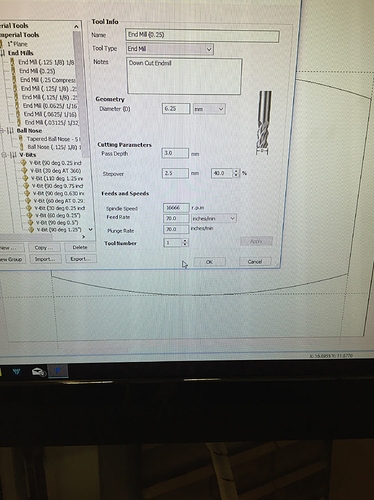 No ideas from the group?

Walnut is tough wood…if the bit was not nice and sharp, cutting it at half the diameter in depth might be a bit too aggressive. Not sure how that equates to a fried spindle and VFD…usually the machine should just lose steps.

You sure the VFD and spindle are toast? Maybe the control electronics?

Maybe the bit got too hot? It doesn’t look like you have dust collection so maybe compacted chips?

I was thinking it had something to do with the bit traveling slightly off parallel of the grain direction and was pushing it to hard. I just don’t remember seeing anywhere that it was a hard type of cut. Since my last round of upgrades this has been my pretty standard setup for this bit but somehow I goofed up. Maybe it was the way the wood was oriented. This was the first time I tried cutting out one my cutting boards on the CNC, normally all of my cuts are on/ thru the face grain not the edge grain.

The spindle I believe torqued, maybe twisted along its axis is a better description when the bit got stuck in the wood. It shot out a very large spark, tripped the 100A breaker to the shop at the main service. After resetting everything the VFD won’t even power on now and it smells like I let the smoke out. I’ll take it apart later and see if there is anything broken that I can replace. I’ll put a megger on the spindle and see if the windings are bad but I’m pretty sure it is toast also. Thank you for your input.

The FVD won’t power on now even though it is getting normal power. I haven’t tore it apart yet but it smells like I let the smoke out. After I’m done getting ready for this show I’ll take it apart and see if there is anything I can replace and I’ll check the spindle windings with a megger. I think when the bit got stuck in the wood the spindle twisted and either one phase shorted to ground or it single phased. I’m leaning more towards single phasing right now. I’m really interested in figuring out how the bit moving at 16,660 rpm buries itself into a piece of wood though. Thanks for the response Justin.