Help with Upgrade paths for the 2017 Generation X-carve

Hey gang! So as the topic suggests I have a new model X-carve that I purchased this year. After some chatting with the great people on this forum already about whether to upgrade or repair after a rather simple cut went horribly wrong I decided to upgrade certain parts of the x-carve. Problem was, a lot of the info I was reading (and I dug through quite a bit) ended up being for the old gen x-carve and it wasn’t until I stumbled upon a few passing comments that I realized perhaps there were a few more twists in the tunnel of this rabbit hole than I was aware of because I had a new model and not the older one which seemed to allow for some of the upgrades to be done easier. So, in an attempt to confirm this I thought I’d start a new thread. One that can hopefully be a central spot for anyone else who may have a 2017 X-carve and is looking to change stuff out. I’ve searched around for a while and didn’t see one yet but hopefully there aren’t like 8 of this same thread that I totally missed because then this is all a tad moot

So here’s my current goal:
Starting with a stock 2017 x-carve (single makerslide, x-controller, etc) I want to do the 9mm thread upgrade, cnc4newbie z-slider 5"-6" version, and swap out all the v-wheels (Delrin part only, reusing the Inventables bearings) with Open Build Delrin V-wheels.

So here’s my question(s):
After reading a passing comment about the pulleys on the new model x-carves being pressed on, how is that going to affect the above? Do I need new motors for the direct drive z-slider and pulley’s for the 9mm belts?

Regarding adding the Open Build V-wheel Delrin part only to the stock bearings, will I need to use a longer or shorter bolt and additional hardware to position it correctly to grab the rail or is it truly just a swap in?

If possible, I’d love to get the links to the products people used as well as any hidden bumps you may have encountered during the install. Thanks everyone! Oh, and I already order the z-slide so I’m kind of committed to the above goal at this point, hah!

Finally received all of the parts and started working on the upgrades today and I can attest that the Pressed Gear Removal technique on the video does not work for the x-carve pressed on stepper motors. I initially tried the tapping out, as shown in the video, and then setup the drill press referenced also in the video but neither worked and only managed to mark up the end of my motor’s shaft. Has anyone who owns the motors in the new x-carve actually done it?

Made a simple puller, works great. 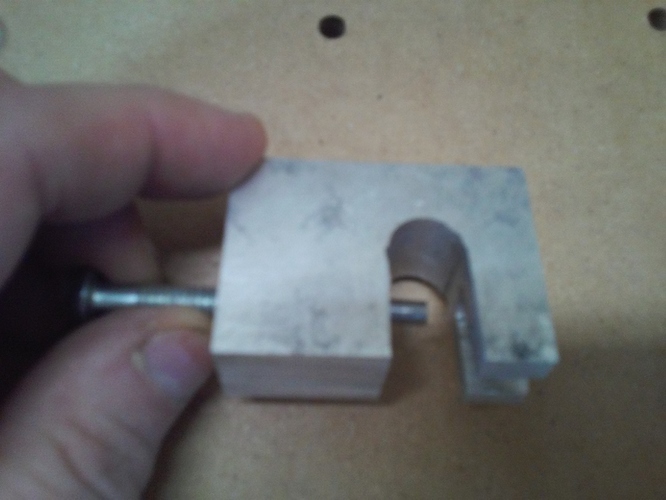 It just started to dig into the end of the motor shaft and scored the metal.

Agreed, @ChrisRice has a cool tool there which essentially does the same thing. I used a flat bit a little smaller than the shaft.

Hah, quite possibly! It’s definitely cold in the garage! I kind of rendered it moot though by ordering 4 Nema 23 - 269oz motors to give it some more kick and get the most from my other upgrades. The original motors will likely get used for a 3d printer next year.