Holy cow I think my arduino may start on fire

Ok, out of no where my machine just decided to not work. While check wires I touched this black box on my arduino and holy f, this thing was hot, real hot.

Is this normal, are there other things that can be wrong? 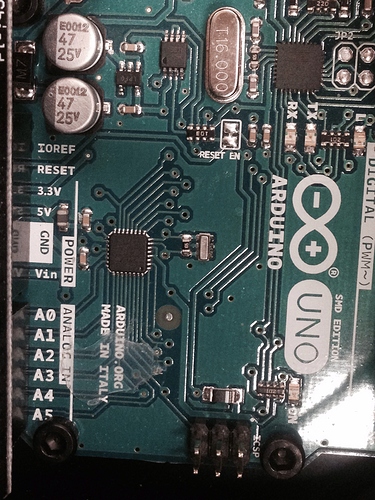 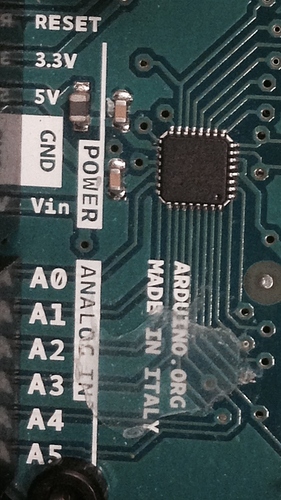 There should be a fan running on your arduino box. Make sure it is still alive…

There isn’t because I don’t use the g shield or enclosure. I have tb6600 stepper motor drivers

Max current draw of an Uno over USB power is 500 mA per the USB spec.

2.5W is not enough to heat up the Arduino. If the Arduino got that hot due to constant processing, it’d come with a heatsink device.

The black box that is referred to, is that the enclosure from Inventables that attaches to the power supply? If so, it’s probably acting like a heat sink from the heat from the power supply and transferring it to the board.

I think by black box he is referring to the chip he has pictured. If I am not mistaken that appears to be an SMD version and that chip is the Atmega328P microcontroller.

IC’s getting really really hot usually mean one thing - short circuit.
I’d get a new Uno and test (or get someone else to check theirs)

I wouldnt expect that IC to become very hot during normal use.
(warm, maybe but not hot)

Sorry, I don’t consider an IC to be a box and I must have missed his other post.

What is the Arduino mounted to? There are 2 screws showing it is mounted to something. Is it possible that it is sinking heat from another source?

Your best bet is to replace the Uno because you’re probably dealing with a bad board. You can try some tests to see if its the board or the I/O wiring. Let it sit idle (not running Gcode) and see if the temp goes up. Then you can remove everything from the I/O pins and let it sit idle and see if the temp goes up. A temp measuring device would be ideal for this (infared/laser temp sensor) and there is an internal sensor you can look at:

Or for $16 from Amazon, just replace the Arduino Uno and reflash GRBL.

its odd because 30 mins later it was all good.

So I think I’ll just spend the few dollars and replace the arduino.

Nothing would be worst than ruining a piece of expensive stock for a $5 Arduino.

you guys are awesome though, been on the forum for over a year, just reading and thought why the heck don’t I post questions when I have them.

Also, phil, are you going to run your arduino with the stepper motor drivers like I did? Or replace arduino out as well?

The ATmega328p processor of the Arduino UNO has a power consumption of 18mA at 5V. The output pins have a 40mA limit, any higher will destroy the output. It is not normal for the processor to get very hot.

I have had $5 boards that got very hot, A genuine UNO only costs $30 and is fully factory tested, the Sparkfun Redboard $20.

If the ‘box’ (aka… Atmega328P chip) is getting that hot you may have a bad Arduino Uno.

From the looks of your picture, i’d assume its a ‘fake’ Uno (real Uno’s don’t have ‘arduino.org made in italy’ printed there). Which is (IMHO) fine… im a big fan of buying clone Arduino’s.

However, from my experience, the clones that are trying to look like ACTUAL Arduino are the ones that fail the most. Even the $5 ones from china have stopped trying to copy the real $25 boards. 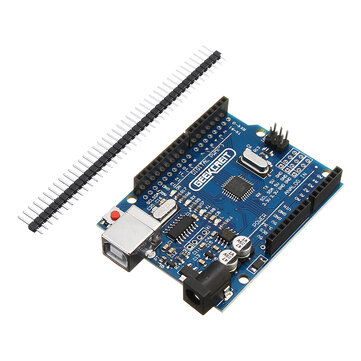 I would suggest picking up a new Arduino and see if the problem goes away… The chip shouldn’t get that hot.

Then inventables @Zach_Kaplan sold me a fake one!?

I called when I first recieved this because I was worried about the glue on the board but was told its nothin to worry about.

Actually his board is real. The following is from a buyers guide for choosing real vs fake Arduinos

One of the 5 founders of Arduino, Gianluca Martino, has severed his relationship from the others. There is a rift in the founding team, ongoing legal disputes, and now there are two separate companies using the Arduino name. Both the original arduino.cc and the newer arduino.org websites have some of the same distributors listed.

Massimo Banzi said in a blog on arduino.cc they have stopped receiving royalties for the Italian-made Arduinos, and those are the Arduinos made by Gianluca Martino’s company that operates arduino.org.

Massimo Banzi tells us about a serious rift in the core Arduino team, which is just coming to light now. One of the founding team members has gone off on 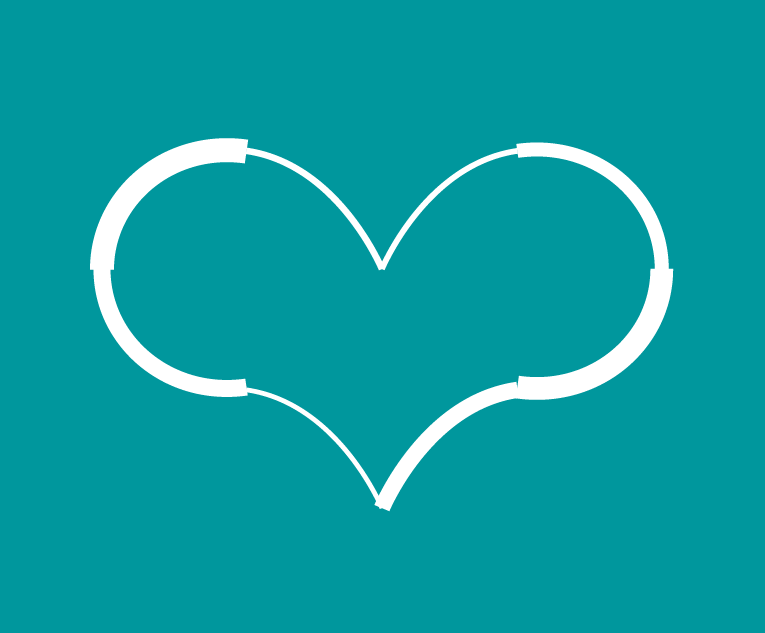 This is the message Massimo Banzi's just published on the forum. ------------------ Today is the day of a solar eclipse, some of these are once in a lifetime events. Arduino is definitely one of the events that will define my life along with many...

Arduino and SeeedStudio have entered a manufacturing partnership to produce the new Genuino branded boards for the Asian marketplace.

Over the Memorial Day weekend the first Arduinos were to be made in the USA were hand built by Limor in the Adafruit offices in New York.

The dispute and split of the companies is unfortunate. Some people are choosing sides, and are strong supporters of one company or the other. Some people are supporting both companies, or are simply choosing boards and associated software based on suitability to the project they are building. Some are choosing boards from the company with strongest online support, or most helpful forum community.

Then inventables @Zach_Kaplan sold me a fake one!?

I doubt it… However, I’ve never seen one labeled like that. If you do a google search on “Arduino A000073” you’ll see the Uno SMD’s built by Arduino.org. None seems to show the silkscreen on yours.

Please contact Inventables support. We do not sell counterfeit Arduinos but as mentioned earlier in the thread there was an issue between Massimo Banzi and Gianluca Martino.

I don’t know which company yours is from it was confusing for us. Based on the date you ordered we could probably try to make an educated guess.

I’ll give them a call tomorrow, thanks for the help.

The issue between Arduino.cc and Arduino.org was resolved late last year with both resolving to work again with one another https://blog.arduino.cc/2016/10/01/two-arduinos-become-one-2/

So I think there it was an issue with the amount of steps I had set for the z axis. Some how I had this set to 188 step/mm this may have been causing wayyyyyyyy to much info to be set through arduino.