Hooking up a second IOT relay to operate shop vac

So I have one IOT relay that controls the router and it is hooked up to the PWM terminal on the X-Controller, if I hook the second one to it it will run for 5 or so minutes then shut down. Is there another way to hook up the second one so it won’t shut off. This is the first time I have had it shut off while running so that is why I believe it is the second relay.

Try hooking the second IoT relay to the 0-10 volt output of the X-controller.

First make sure that the IoT relay can handle a 10 volt input.

You could also experiment using FLOOD or MIST outputs for the 2nd IOT relay.

I’ve had no issues running my router and my Jet dust collection system off a single IOT. I’ve done cuts up to 4 hours continious run time and none of the wiring gets even the slightest bit warm.

Dust collector and shop vac can be two different beasts as well. The shop vac may be drawing more current than a DC would.

Those IOT relays are rated at 12 amps. The Dewalt is stated at 7A. Some shop vacs are rated at 8A or higher potentially (same with a DC). That is max capacity of the relay and could cause problems even if the circuit itself is a 20A circuit and can handle it. This still applies if you are daisy chaining IOT relays.

Now, if the dust system is connected sub-optimally, it could be under a higher load than normal and pulling more current which could pop an internal breaker/fuse of the relay or similar.

if I hook the second one to it it will run for 5 or so minutes then shut down. Is there another way to hook up the second one so it won’t shut off. This is the first time I have had it shut off while running so that is why I believe it is the second relay.

What exactly is shutting off? The whole system? Is the breaker tripping? Is just the second relay shutting off?

In my case it does not and I need to run my dust collection off a different circuit to the X-carve.

As Bob, I, too, have to use a separate relay for my vac., or my IOT will trip out from the in-rush current.

It uses 15A outlets and higher rated relays but it is adhering to the 80% rule.

So it ran for a lot longer this time. I started thinking could it be the power strip I have everything plugged into cause interference. The spindle will shut off and the shop vac shuts off, and the x-carve will stop moving but doesn’t say anything in UGS. I am going to give picsender a try this weekend. Maybe something is going wrong there.

Take the relay out of the system and operate router and vac manually on that power strip as a test.

You are probably overloading something with the current draw.

My IOT controls both the spindle and the dust collector.
HOWEVER it is on its own 20A circuit.
Everything else is on its own circuit.
With this set up, I have no problems.

I had my DC comnnected to the relay but moverd it to a dedicated iVac system when I was smelling burning electronics. The IOT relay is not the best option for 1+ hp motors.

It is just a shop vac, it says it only pulls 8 amps.

I don’t want to tie up the dust collector so I can work on other things at the same time.

So I bought two new surge protectors and plugged the relays in to separate ones and the machine has been running for over an hour now with no problems. Hopefully that was just the issue. I left the shop vac relay hooked up to the mist terminal and just added the M7 and M9 commands.

So I thought I had it fixed… Wrong! Yesterday morning I got up to start a new sign and it was about 1/3 of the way through and it stopped again. So this time it started acting weird so I decided to first updating the firmware. So now when I open UGS or picsender the axis movement is backwards even though it was okay in easel. So as I am sitting there thinking the X-Controller shuts off and now won’t turn on. So I emailed inventables and now I wait.

I bought the IOT relay and assumed with the multiple outlets, id be able to power both my dust collector and spindle… but once I saw its capacity, I didnt even bother to try, and instead bought 2 of these seemingly cheap relays… one controlling the spindle, the other controlling the dust collector. After learning the correct way to wire these, I have had zero issues, and the peace of mind that each are more than capable. But to be safe, I have them connected to a surge protector for those moments I absent mindedly jam the spindle all the way down into my material when forgetting to reset my zero. Inexpensive too… ive been using them daily since last June and they have become the most reliable aspect of my cnc station. 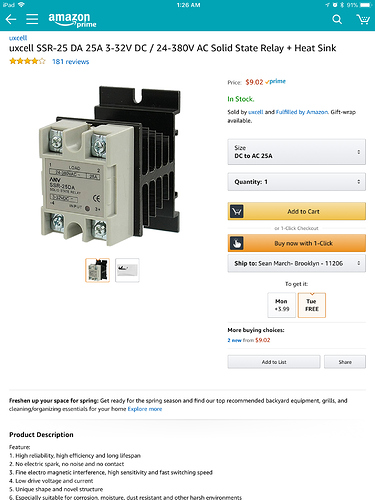