Hoping to get some direction

I currently have vectric aspire and was wanting to know if there is any tutorials that will help me along on making the letters like in the photo where they are trimmed and offset from the smaller letters. Thanks for any help and insight 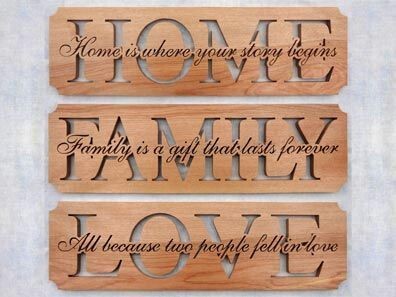 I’ve not done this, so its just speculation, but I think it’d work. If I had to guess the pieces you’re missing are “convert text to curves” and/or the offset tool.

Awesome. Thank you very much. I’ll give it a shot when I get home from work

Worked exactly as wanted. Thanks again

Please post pics when done, I love these, If I only had more time!

You inspired me, my anniversary is approaching and this will be a perfect gift for my wife who loves gardening.

Just knocked this design up in 15 mins.

The methods above should work. The easiest method I know of would be to use illustrator to overlay the text, convert text to path, outline the path 1/4", and then use the Merge tool in the pathfinders section. It would essentially create exactly that vector arrangement.

This method is exactly the same method Inventables used when they created their LED sign, and you can view that video on youtube.

Nice, did you do that with only Vectric?

Thanks for the reply that’s good to know I will have to learn that technique.
I have Vcarve desktop and am very happy with it’s capability.