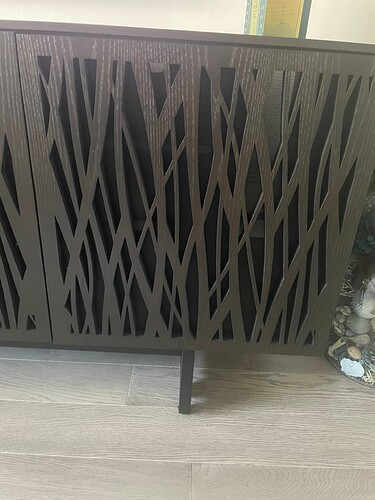 See if this will get you started

Here’s another one you could play around with

Thanks. Those are both close and love the idea of using trees, but the design has to match that pattern, in that the wall covering will essentially be above that cabinet

The best way to match it exactly, might be to put something light colored behind the pattern, like a towel or bed sheet, to give it more contrast, then take a good picture of it and import it with image trace into easel. Will have to get a good picture with good lighting but ive done that technique before to match other designs from real life.

gotcha, and you made me reexamine the original photo (I only have a photo) and can see that the shapes within are made from curves rather than straight lines. I think grasses my be my best bet. thanks again

IF you wanted it spot on ideitical than a straight on photo will help, BUT you could import the image into Fusion360 and use Arcs to sketch over top of the image sorta like this shows: How to Create a CAD Model from a Photo in Fusion 360! FF96 - YouTube
That being said, Fusion360 is a much more complex software to learn VS Easel and others.

IF you can get them to place a paper or other white object behind the door and take a photo, try to get it as straight on as possible. I then suggest trying Easel, BUT also trying Inkscape as I think you will be happily surprised of the results of Inkscape over the results of Easel’s more automated method. This shows how to do the image trace in Inkscape> PNG Picture to SVG for CNC Tutorial - Image Trace - YouTube

Thanks, I’ve used fusion quite a bit, but did not think of it for this application, I guess it seems over complicated. I think image trace my be a good way to go. I am actually getting the door itself so I can play around with photos.

the design has to match that pattern

Exactly? Those cabinet doors are copies of each other. Will the wall hanging also be square?

I would do what someone suggested. I would take a good photo, then use Irfanview to create a black and white image, then use tracing in Easel

Thanks for all the suggestions. Client does not want duplication, but stylistically similar. The original (which I now have really good photos of) is 19" * 16". Client wants two 25"*69". I’ll fiddle with similar images and then trace one in inkscape, or even easel depending what works.

@ChristopherCook The project above is created from an image of the same cabinet. I’m pretty sure I saved the svg if interested.