basically. im trying to get my drone frame into exsitance. i 3d modeled it with blender because i cant afford anything fancy. vcarve promised it could do it. but all im getting is a pixlated mess. and it does weird s*** to the tool path. its hardly noticeable around the frame edges. but the drill holes are jaged is crap. and the motor mount holes are completely wrong.

i even rendered an 5k orthographic image. and it was much closer but still off. but the 3d model should be absolute. i dont see why i cant just tell it to outline and profile it.

my budget is blown. and it would be a pain to redo it entirely in a different program, if i could even afford one. i need to take up some sign projects to make some money back first. but can anyone help me save this project. i already spend almost a $1000 on parts and materials. as well as this incredible 1000mm cnc which set me back $2500 after software and shop vac + dust shoe which i needed since i dont have a shop to put it in. its been my dream to finally build my own drone from the frame up, and with 8 months of planning and saving up. ive hit a serious kink. i want to design many more. but i got to get the first one up first.

the tool path. its hardly noticeable around the frame edges. but the drill holes are jaged is crap. and the motor mount holes are completely wrong.

i even rendered an 5k orthographic image. and it was much closer but still off. but the 3d model should be absolute. i dont see why i cant just tell it to outline and profile it.

my budget is blown. and it would be a pain to redo it entirely in a different program, if i could even afford one. i need to take up some sign projects to make some money back first. but can anyone help me save this project. i already spend almost a

I’m no expert, but I’ve been able to do some OK cuts from a downloaded mesh with vcarve.
What format is your model in? I’ve only used a mesh in STL format, and a SketchUp 2015 file.

Are you doing a 3d Roughing followed by a 3d Finishing pass?

I’m not sure what’s going wrong for you, but if you attached a .CRV file with the toolpaths in it, someone here might be able to help.

Have you seen thess threads? A couple of pretty good examples.

Appreciate it, I grabbed the dragon STL as well as found another on eBay that I bought. I'm home finally tomorrow so I'll give it a shot.

What format is the model that you are using in V-Carve? How are you importing, setting things up in V-Carve? Have you generated toolpaths?

I’ll give you a hand getting things setup if you would like.

Ill have one posted by tonight. Basically. Its like and extrued shape. Its literally nothing fancy.

You might get a much cleaner cut modeling some or all of it in VCarve as a profile, pocket and drill operations. (I was using using my 1/4" end mill to drill 1/4" holes) I did this for a few projects and found it was also a lot faster to cut this way.

Initially I was importing the curves into VCarve. I found I had to use the EPS export form inscape because inscape dwg export was doing very weird things (braking curves and changing sizes)
Hopefully you can export your basic shape as a curve from blender.

Later on after watching a bunch of tutorials on Vectric’s website (I recommend the dovetail gadget one as they show how to modify curves) I have started modeling in VCarve directly.

One thing to keep in mind that even though you may model a sharp corner, depending on how it is cutting your corner will have the radius of the bit you are using. I ran into this a couple of times till I figured it out.

(Tip: the vector trim tool will not work with vectors are grouped - this took me forever to figure out.)

Here is a crude example of what I mean
Example.crv (2.2 MB)

stl. and it looks good in the import screen. then the quantity drops every stage till its unusable.
i cant post the whole file. i really want to finish it before i show it to the world. and i down want to completely hand out the blueprints to this particular model. but the leg and a corner of the main plate wont spoil to much.

and ps. just so no one tells me it breakable. the arm is getting a redesign because i know its far to breakable in its current form. 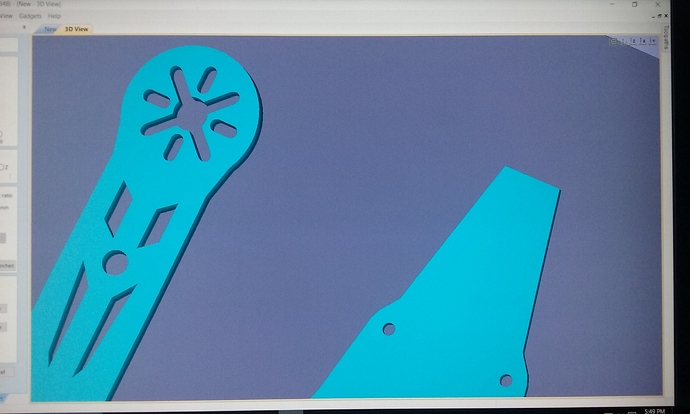 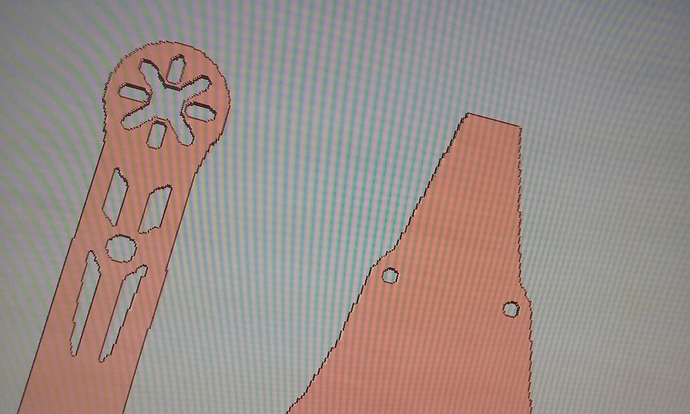 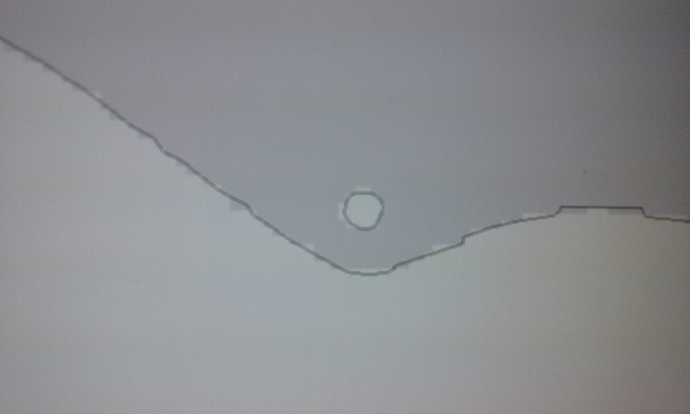 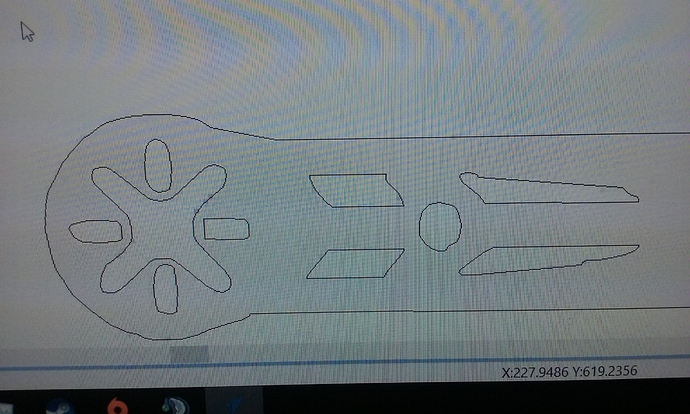 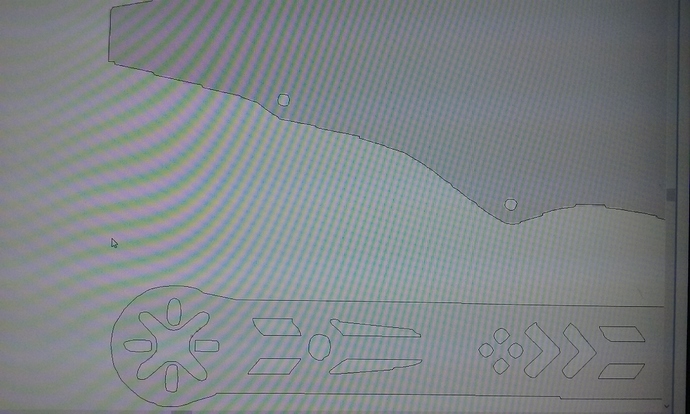 The first screenshot is v-carve…what are the others, I can’t tell.

Can you describe how you are importing the model into V-Carve? Not much I can tell from the pictures posted.

all of these are vcarve.

i export stl from blender
import stl to vcarve.
set the scale and height - picture 1
result is picture 2
then i ask it to outline it as shown in vetrics 3d tutorial. and i get the garbled mess that is picture 3,4 and 5

its acting like its an extremly low res image, and i dont know why

is it just flat shapes? If so an stl is not the best choice, can you export as vectors?

if i could i would. ive hunted every where for a way to convert it. and it doen’t seem to exsit. plenty of vector to 3d. but no 3d to vector.

and i did say it was simple extruded shapes. but vcarve doesn’t see it.

Might be easier to recreate the shapes using primitives in v-carve.

ill try that with my 5k image as reference. thanks

any vector making programs you believe i could use replace blender

For basic shapes like that, I would just use V-Carve.

after a while of tinkering. i got it to cut out a pretty nice looking test frame in wood. a little more refinement and it’ll be ready to cut out g10. i also like that thanks to the way it worked out. vcarve minimized the decorative cuts so that they werent so big and sharp, and are now much stronger than they looked. i feel like i can break it only because its plywood, but it would still require effort.

thanks for the help

plenty of vector to 3d. but no 3d to vector.

I have a very crude and ugly way that I used to use. I don’t recommend it but I have yet to come up with better.
I use TinkerCad. It is a simple, web based 3D design site.
It has the option of exporting a 3D object as a .svg file
And I discovered that it did a trace of whatever was on the zero work plane.
So a basic extruded shape it would do a outline trace this way.
I would then import to inkscape for cleanup.
I would then have to convert them in inscakpe to something else as I can not get VCarv to import SVG files.
(I found eps files work ok)

Now I use the “create vector boundary from selected components” button on the Modeling tab of VCarve.

Well. My problem was when i asked it to trace it, it would look like this pictures i posted. And i cant use that. A drone frame needs to be accurate. Specifically the motor placement and mounting.

But the way i fixed this was a 5k orthographic render from blender. I may enen try high resolutions in the future. But 5k worked reasonably well after cleanup.

I was still a little concerned about the drill holes, as they didnt look quite right, But a drill cycle with my 1/8 end mill worked great and everything matches fine.

As an added bonus the sharp decorations that worried me were also cleaned up automatically when the bit size was determined.

I don’t know Blender, but maybe this?