How do I reset UGS hardware settings

I have been trying to use UGS and altered some of the hardware settings. Is there any way of reseting them to factory settings?

I have a feeling we are talking about different software?
I am looking for a forum to help me run a program called Universal gcode sender.
see this page
http://winder.github.io/ugs_website/download/
I assume this forum can not help me?

If you put the $$ command into the console do you get a list of $ codes?
I am assuming the UGS refered to here on this forum is not the UGS I am using?

OK thanks. I now have steppers that don’t do what they did when I started and having run some commercial gcode software though it I can’t get anything to run now the stepper motors just buzz and don’t even move if I do a jog.
I think it is because some of the $ codes have been altered and I don’t know enough about them to correct them manually.
I suppose another option is to find out if someone knows if they still have the original settings they could send me so I can alter mine.

I still think we are taking about different software? take a look at the bottom lines of this page
http://winder.github.io/ugs_website/

OK well thank you for your posts anyway.

Is there any way of reseting them to factory settings?

In UGCS enter the command $RST=$

That will return the settings to the ones that are set up when the firmware was built.

Larry. Thank you so much that has done it.
My motors now work properly.
Are we talking about the same software here?

Are we talking about the same software here?

Yes, some people call it UGS, I got used to UGCS and it stuck. They both stand for Universal G-code Sender and there are three popular flavors.

Version 1.0.9 latest stable version but will not send very, very large files.
The nightly build - a work in progress
and then there’s the Platform version.

All three are produced by the same person and their features are similar.

I have ordered an Anet A8 printer kit so I am trying to get to grips with the software provided.
I have UGCS ver 2.0 and am finding it quite easy to control 3 stepper motors through 1 of these 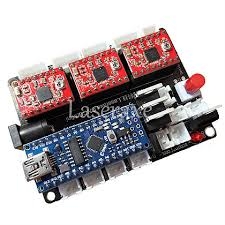 Which version do you prefer?

I like stable software, so I use version 1.0.9 for the things it does well.

For the things it doesn’t do well, I use PicSender.

Just looking at the picsender website.
If I have problems that UGCS can’t solve I might look at that.
Thanks.

Are we talking about the same software here?

Is there any way to keep track of good advice so that I can refer to later in this forum?

Is there any way to keep track of good advice so that I can refer to later in this forum?

If you click on the three dots (…) at the bottom of a post you can get options. One of them is to book mark the post. It looks like a square with two legs.

I am having the same problem now, how did you fix yours if you don’t mind me asking?

i tried that, but still didn’t work. I still can’t jog my controllers. Yes it homes, but wont jog