How to engrave small lettering with the X-carve?

I was wondering if anyone has created a tutorial or noob guide to engraving small lettering with the X-carve? I’ve done it successfully on 2" x 3" linoleum blocks but I’m having trouble engraving small letters (down to 1/4") on birch and oak (which has left me with lots of expensive firewood :-0 ). The detail tear out is terrible, sometimes letters on the same line come out with inconsistent heights, letters on different lines come out with different depths (even though the depth setting for the piece is set the same for all), and the carves are exceedingly slow. (Note: I’m creating the designs with VCarve Pro and sending them to my X-carve via Easel.)

So I was hoping to find something like a table or spreadsheet that indicates what size and type of bits are best used for different sizes of lettering on different materials.

We have a table for that on the Shapeoko wiki: http://www.shapeoko.com/wiki/index.php/Endmills#V-bits — material is mostly invariant for this, but one wants harder things, and finer-grained wood for smaller sizes so as to better preserve the details.

It really depends on the letters.
For cut out types use what those here suggest in the Vbits.
Otherwise if your doing raised letters you have to use vbit and end mill to get what your after.
As an example here is something I did that uses both Vbit and regular small end mill. 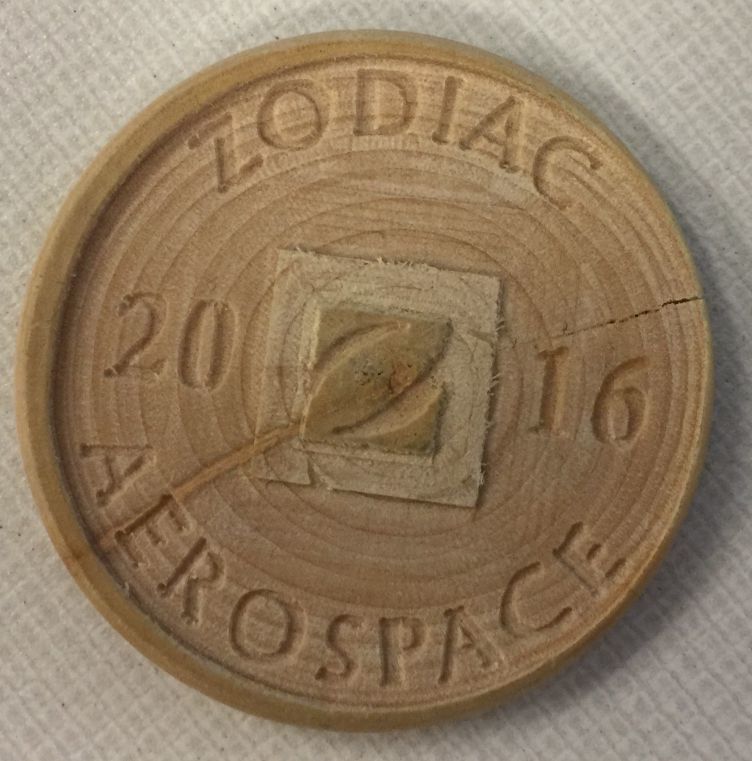 You can see the text is done with just a vbit but the Z in the center used both a Vbit and 1/32 end mil. The main area I used a larger bit.
You have to think of your project in layers.
The first layer is the area outside of the square in the center. I carved everything needed to get it to that depth then I did the next part which is the Z in the middle.
Last was the cut out text using the Vbit. 20° .01 type just like Phil and Rick,
The real trick is when you use the V-bit you have to determine the DOC (Depth Of Cut) If you set the vbit to 1 or 2 mm you can get some nice lettering without cutting through a 6mm thick part.
Vcarve and others will drop the bit deeper for larger areas of cut. Then raise it up for the corners.
By setting the DOC to 1 or 3 mm you limit its cut travel on the Z axis You can use another small bit like a 1/32 end mill to cut out the center. Vcarve has a feature for doing this. I do not know about others.

Here is the design image (from VCarve Pro) of the plaque I’m trying to cut in oak for my gardening group. The dimensions of the plaque are 12" width by 6" height. The text is italic Helvetica from the VCarve Pro font library. 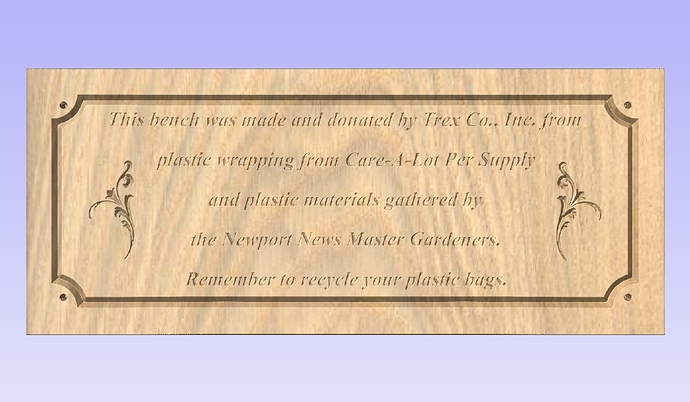 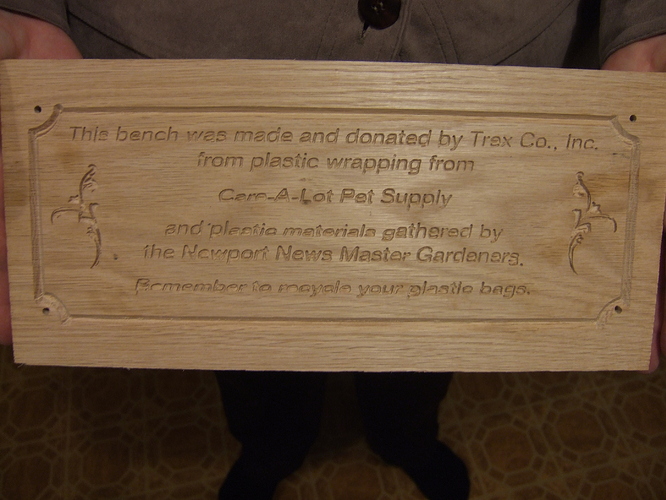 I’m using a 30 degree engraving bit (purchased from Inventables) to cut the text and the flowers. The border was cut with a 90 degree .5" diameter V-bit.

Now I take it as a given that I’m doing something wrong. I just don’t yet understand precisely what. So help and advice as to what adjustments to make, or machine fixes to try, are definitely appreciated.

What are your feedrates and depth per pass? I would say you are going too fast or too deep per pass and that is causing that tiny little bit to lose steps in that hard oak.

Have you gone through the calibration process and adjusted your potentiometers (power to the steppers)?

Yes. Adjusted the potentiometers several weeks ago. They are set as high as was recommended without being too high.

Are you still having issues with the Z-Axis grinding while moving down? Is the machine running well now.

What spindle are you using? The Dewalt? What speed setting is it on?

I’m using the Dewalt 611 with the dial set at “1”. The grinding noise problem I solved with adjustments to the tension of the Z-axis v-wheels and some loctite (although I discovered what seems like a design flaw in the machine which I’m planning on posting and discussing at a later date). And I have been able to do less detailed cuts (that is, cuts without small lettering) just fine on other materials in the past few weeks. I have also been able to do fine detail cuts on small 2" x 3" linoleum blocks (making rubber stamps) without any problems.

So the issue is just on the oak? Oak can be very tough to get clean cuts. Oak can be very hard and the grain/fiber truly requires a nice sharp bit. I know a lot of people here will disagree with me, but I run the Dewalt a bit faster on oak (2 to 2.5) as I tend to get better cuts.

Also, when I need a hard wood, I tend to use maple or cherry as they allow much better detail and cut so much easier then oak. That is just my experience…again, others will disagree.

Try a test cut of the same file on MDF and see how that looks.

I hear you. Unfortunately the only types of wood that are readily available to me here are pine, birch, poplar, and oak. Ideally I’d like to do this plaque on a wood that is naturally rot and weather resistant (like cedar, cypress, or redwood) because the plaque is going to end up outside for the long term.

How well was the wood secured to the wasteboard…is it possible it could have moved just a bit?

For the text carve it was secured quite well. The material slipping is what caused the problems with the border so, after the piece was already shot, I ran the text carve on it as a test.

But even if it had moved, that wouldn’t explain the differences in the size of just some of the letters would it?

If it shifted a hair as it was carving, then shifted back…it could cause that. It is odd that the shrunken text is in the middle of a line…did it carve from left to right…or right to left across that line?

If so then something happened in the middle of the line of text.

Well, as it took 4-5 hours to carve, I have to admit that I wasn’t watching it every minute. But when I was watching the carve, it seemed to be carving mostly left to right and bottom to top.