How to engrave small lettering with the X-carve?

I tried 70 ipm previously (as per Phil Johnson’s recommendation) and the results were quite a bit worse than the 35ipm that I used in my latest carve. Depth I now have set to 0.04 and that seems to be close to correct. The burning on the border was my fault because I had the depth set to 1/8" for a single pass and that was just too deep for my X-carve to handle in a single pass. And my bits were brand new when I started this project.

As to my belts and v-wheels I have done my best to tune them in just right and I examine them before each carve to make sure they are correct. As recommended elsewhere in the forums I bought a fishing gauge so that I could use it to precisely set the tension on the belts.

Just for the hell of it, today I set up Easel with a similar font (Baskerville) to the one I’ve been using in VCarve and tried to cut the text using Easel. The D.O.C and all the other parameters were the same as I’ve been using. The quality from that effort was much, much worse than any other cut I’ve done so far.

Also, the “simulation” in Easel said the text cut would take 3 minutes. I aborted the carve 11 hours later when it said it was only at 56% complete.

Next cut I’m going to try is going to have the feed rate set at 10ipm and I may try and convert the text to curves in VCarve before I start the cut. I’m also going to check the voltage on the pots for the stepper motors before I start my next attempt.

11hours? Something is very wrong. Can you share the v-carve file? What toolpath did you select to cut this with?

That doesn’t look like. V-Carve toolpath to me. Looks more like a profile cut with a vbit.

I agree with @CurtisCummings, are you using a v-carve toolpath? It really looks like you are cutting on the line.

@CurtisCummings: I think I need to clarify my last post. I used Easel to create a separate design with the same depth and cut parameters as I had been using in the v-carve design. The only difference between the two was that Easel didn’t have the Helvetica font I used in Vcarve so I substituted the Baskerville font. This cut was done strictly with Easel. No Vcarve involved.

The photo of the bad 11-hour Easel cut is below.

@PhilJohnson: Thanks! I’ll check out the videos.

The tension on the belts had already been set using a digital fishing scale; although I had set them at approximately 2.5 lbs. Others posts had said the tension needed to be set so that the belts would “twang” like a guitar string, and since I play guitar, 2.5lbs seemed about right. I will, however, try adjusting them tighter to the 4.65 lbs you suggest.

The pots are (and have been for all my attempted carves) adjusted to just under 2 volts for my NEMA 23 steppers.

I think there is some confusion to using V-Carve and generating a v-carve toolpath. V-Carve has the ability (Easel does not) to v-carve the text. This type of carve uses a pointy v-bit and does more then just cut on the lines. V-carving moves along the vectors and raises and lowers the bit to cut out in a 3-d type appearance. Cutting along the vectors just cuts a line with no deviation of depth. Try generating a toolpath using V-Carve’s v-carve capability, you will probably be impressed with the results.

@ErikJenkins. To the best of my knowledge I have been doing exactly what you suggest. This plaque has four toolpaths. Threee of them are V-Carve / Engraving toolpaths. “TrexOakBorder” for the border, and “TrexOakText” for the text, “TrexOakFlowers” for the flowers. The fourth toolpath is a Drill path for the holes in each corner.

The V-Carve / Engraving toolpaths are all set to a flat depth of 0.05".

Each of the toolpaths is saved, imported into Easel one at a time, and cut. The preview image of what the cut is supposed to look like is below. 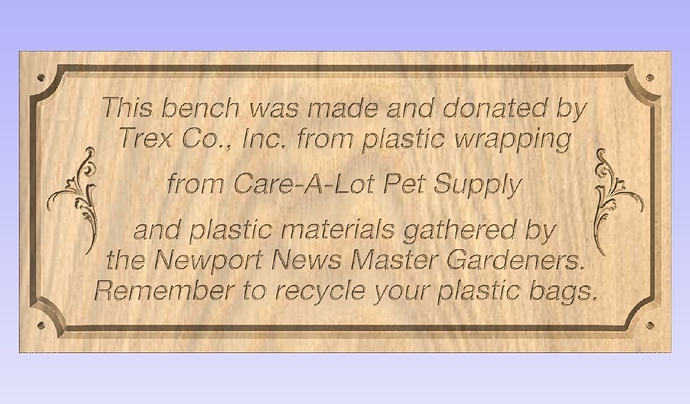 I’m aware of that. What I don’t know is what that “trax” boarder is that he’s talking about. And why it’s taking so long to carve it. I did a Copy bitmap v carve once that tried doing some weird stuff. But building his boarder with the process I described should be a straight line carve. And why he’s trying to do it with such a small but when a 60 deg will give him the detail he’s looking for. You

Can you upload your crv file so We can see what you have going on.

@PhilJohnson: That photo was of an earlier cut. I’m getting a good border now. My only remaining problem is with the small text cut.

The problem with that earlier border was that I had the depth of cut set to 1/8". That was too deep for the machine to cut with the 90 degree v-bit on a single pass. I guess the stepper motors just didn’t have enough torque to drive through that curve.

@CurtisCummings: Except for using a flat depth, and using a 90 degree v-bit rather than a 60 degree, I did exactly what you suggested. And the border cut does only take about three minutes.

It was the copy of the design created with Easel (not V-Carve Pro) that took 11 hours to try and cut just the text.

Have you tried to just sent the code from Vcarve to UGS and run? Just wondering.

Yes I’m looking at it now. I’m not finding a reason it’s taking so long. Aspire says minute for the boarder and flowers. And 2 hours for the text. At 30ipm that sounds reasonable. Do you have a 60deg .5?

The 90 for the boarder is good. Its the 30 for all that text. A 60 x.5 will do a much better and faster job. I rarely use a flat depth. And when i do ill use a clearance tool.

Not yet. Right now I really don’t have any other way to send the Vcarve to the X-carve other than via Easel.