I checked all the settings… All the v-wheels and the motors and the motor current pot settings.
I did a rough pass then one final pass
Used a 1/16 end mill then a ball nose at .5mm for the final pass.
With the images rotated 90° to the left, The X axis is from left to right and the Y is front to back.
Seemed to go well but then on the 2nd run I see double looking image.
See pic. Anyone know what causes this? 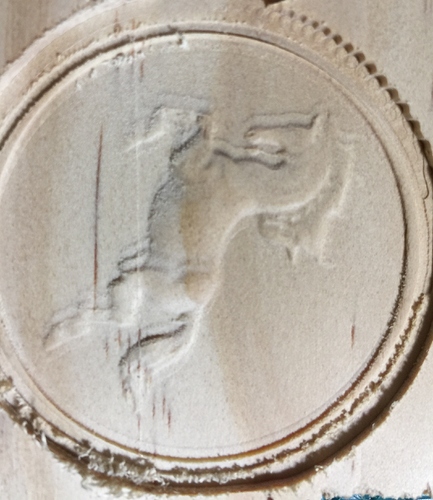 Put your 3D glass’s on and this will look epic.

flip your belts over and have a look for chewed out teeth ? my 2cents,

yes it is a tapered end mill.
could be the change of bits.
I have a zero block but its larger than the piece I am working on. Going to put the wood work piece on a larger piece of wood and measure from each edge to make sure all starts where it should.

I noticed that when I put a slight bit of pressure on the z axis that I get a larger than should be deflection. I think it may be the eccentric nuts. I hate these things as they dig into the metal and are a pain in the ■■■ to tighten and adjust. They should have put in an insert so the nut will not easily scrape the metal causing a ridge which is preventing the nuts from doing their job. My Z rail eccentric nuts will not make the top of it tight. I am still able to spin the v wheel and I can’t get it any tighter. Going to have to order a new mount.

another 35 bux out the door. I will however fix these nuts like someone else suggested.
I just want to be able to run this machine without soo many issues.
My vacuum hose is rigid and it is causing the deflection due to the X axis not being tight enough.
I would use a smaller hose if they would be standard… I have all sorts of dust ports on my other equipment and they are different sizes.

I have the spacers but haven’t bothered to replace them because I haven’t had an issue in a year with loose Vwheels.

I didn’t do it that way at first but I now do it. I also used a dremel to remove the lip so the nut could do the job but the top part the v-wheel is still loose. I also do not tighten the two fastneers that hold the mount to the acme screw till the thing is solid. But I cannot get it to the level it should be like the rest. The eccentric nuts will be rounded so they cannot grind as well once I get the new mount.
I will be checking all the parts too and attempt to use my system again to get it rock solid. Need to cut up some plates for the riser mod that Phil made.

I went to the garage last night to work on a project. Then discovered that there was this strange bump when moving the X carrage back and foruth. even going really slow it was there. So I thought maybe the V-wheels were damaged.
Well took my X gantry V-wheels off and they are all working fine. I did have a couple of washers on the wrong side that could have caused the bumping. Then I noticed that the belt was deformed in one spot. I mean really deformed to the point of almost breaking. It was not too tight either. I am not sure how this happened but I took it off and replaced it.
I then carefully took off every V-Wheel and then put them back on making sure the washer was on the correct side and that the entire gantry would move smoothly before tightening it down.
I ran it on the job for 4 hours and it worked flawlessly.
I believe the deformed belt and V-wheel issues were the culprit of the problem I had.

I feel a lot of problems people have could be because of these belts being out of spec, meaning, deformed, stretched etc,

my xcarve went pear shaped for a while and for the life of me i couldnt work it out, i checked everything (except the turning the belts over and inspecting teeth) 1 belt was completely shot, teeth all skewed, rubber actually cut part way through ,

I then made the epic fail of fails and ordered 3 x 1 metre length belts , DOH!!!

i had to splice belts to get machine running until my new 10 mm belts arrived, (another story)

when all the machine is nearly metal and one of the few variables is belts or wheels, we need to pay more attention to them,

honestly, my belts always looked ok from the top. I cannot remember turning them over until it was too late, they were mangled,

with a larger spindle they work very hard,

anyway, rant over, my 4 kids went back to school and im ready to play/work/play

I am getting a bump in the y rails now.
I will report my findings when I go back out in the garage to work on the machine again.
With these strange issues with the belts I am going to see about upgrading the machine to use chain or rod drive later. I just have to wait for my tax return.

The only thing that could have deformed my belt would have been it riding up over the pully wrong. This would be because I didn’t have it at the correct tension. Phil uses a weighing tool that is used to weight fish and I am going to get one of those and tighten the belts to what he recommended in another post. Loose belts will allow them to ride up and get damaged.

What is the name of the controller ?

Cool. are you going to upgrade the steppers?