Inside of letter chipping

When I cut the inside of some letters like “M” or “N” or other letters that have points on the inside sometimes chip off making the point smaller. What am I doing wrong? Is my spindle to fast? I am using the Dewalt DWP 611(speed setting about 3-3.5), and I am also using the stock easel settings which seem to work pretty well. I am using the straight end mill bit that came in the variety pack. Am I using the wrong bit for the letters? I was cutting the letters out of Oak, and some Plywood. The Plywood came out better. Please Help!

Sometimes that will happen just because of weaknesses in the grain, but you can minimize it by taking shallower cut depths and/or moving a little slower.

Also, the faster you run your 611 the sooner you’ll wear out the brushes (and possibly heat up/dull the bit). I typically try to run mine at 1-2, and rarely have problems. Unless you’re doing production runs and time=$, you’ll extend the life of your 611 and bits by using the lower speeds for wood.

The formula I use is:
Feed Rate (IPM) = RPM x # of cutting edges x chip load

To figure out the chip load (thickness of chip) for softwood or hardwood you can look it up in the table published by Onsrud.

So you can take the low end of the range

Ok. Thanks for all the replies. I will try these ideas out. I have one more question, how do I figure out what depth per pass to set for any given project. Is there also a chart or formula for that too?

If I may add another suggestion, you can keep this to a minimum by applying a finish of some type. Even krylon matte finish can help with this.

On an industrial machine that weighs between 2000lbs and 8000lbs with a spindle that is rated at 30 hp, Onsrud, publishes that you should start with a depth per pass equal to the diameter of the bit. For some perspective the X-Carve weighs about 35 lbs and the Dewalt 611 spindle is 1.25HP. That means they are not as rigid as an industrial machine and the spindle is not as powerful. They also cost 40x less

The deeper the carve the more power you need to get through it. At some point you also run into the strength of the bit. If the machine is providing enough rigity and power then the weak link might become the bit and it will snap. Setting the right depth is a balance between the material you are using, the power of your spindle, the rigidity of the machine, and the type of bit you are using.

There is no “perfect” answer to setting the right depth it’s really a set of ranges. Inventables has been doing LOTS of testing on this over the last 3 months and we have a few announcements we’re going to make. In the interim here’s a rule of thumb:

0.003" is the thickness of a piece of paper. For a finishing pass on a piece of wood, plastic or MDF .005" is something to start with.

With the Dewalt 611 you can probably start at 1/4 to 1/2 the diameter of the bit. I’d start closer to 1/4 the diameter for harder materials and 1/2" for softer materials and adjust from there. Remember these are ranges and their performance are a function of your design, the material, how sharp your bit is, how well you have clamped the material, and what speed and feed you have selected. Since you were having trouble with the sharp corners I started you off on the lower end at .020". You can probably get away with 0.040" but you can also run into issues with the dexterity of the material especially in plywood. Sometimes the knots, the grain, or the layers aren’t in your favor and the wood just breaks. This happens much less with higher quality wood and with hardwood (as compared with plywood).

I’ll add one more note about clamping. It matters a lot. It’s actually the silent killer. @EricDobroveanu has learned through his experience machining aluminum that even the difference between good clamping and screwing the material down to the waste board with screws makes a difference in the quality of the parts he can get out of the machine. Instead of using the clamps we sell with the machine he drills holes in the material and screws it down into the waste board. This makes it so not only is the material not able to move up and down it is also physically not able to move in the X or Y. If you clamp poorly the material will most certainly move. If you clamp well with the clamps provided there will be a little movement compared to drilling the holes in the material and screwing them down but potentially not enough movement to make a difference. However as you carve more and more out of the material it starts to look like “Swiss cheese” and then your clamps are less effective than when you started. You’re no longer getting the benefit of the strength of the material because it has been carved away. This is where his screw down method really shines. He is carving out pieces all over the material but the screws are strategically placed throughout minimizing vibration and deflection in the middle. This is especially important on thin materials. You’ll notice if you clamp a large piece of a thin material the center is not clamped. When the bit gets to that point if you are using a spiral upcut or sometimes even if you aren’t the material will ride up the bit and deflect. This can cause more to be carved than was specified in Easel. As the thickness of the material increases this is less of an issue because of the strength of the material however it still exists to some extent. You can use double sided tape if you find the type of project you are doing can benefit from additional support in the center.

With respect to holding, I’ve been using double sided tape for my inlays. As you noted, once you mill a lot, the material has a tendency to break free causing all sorts of bad things to happen. I guess I could use tabs, but I was worried about the inlays not fitting properly and lot of sanding after the fact. Again, one more thing to try in the future.

@TheGuru he is using a 2 flute bit running it at 16,000 RPM. If he goes slower he’s going to get rubbing. You start heating up and dulling the bit. I should also note if the bit is already dull my settings won’t work.

You are correct that if you go too deep then the torque required to remove the material is greater than the Dewalt can handle.

@KyleSlack another thing you can try is a 1/16" fishtail bit. I find that it does a better job on the details than a 1/8" 2 flute straight end mill.

I guess I’m running way too slow then. Once I get my machine back up I will experiment.

@TheGuru are you using the Dewalt or the 300W DC Spindle?

I also switched from an straight edge end mill to an upcut and most of my chipping ended immediately.

Oh. I don’t know the speeds on the Makita. Which model number?

WRT to the speeds, Easel uses a leisurely 30ipm with an 1/8" bit and .028 DOC…trying to understand what is “recommended” via the forumula vs what really “works” and is practical with the X-Carve/SO2. I’ve done some tests tonight and speeds over 60ipm seriously degrade the accuracy of my machine. 80-90ipm might be practical for large clearing passes, but anything that needs 0.001 accuracy is completely off the table for me based on my testing. BUT, I just upgraded to X-Carve and need to let my belts break in a little -> even though, I doubt that will matter much; I love the SO2/X-Carve, but it’s no …said with complete and utter love

The key to the formula is getting the right amount of bit engagement so if you slow down you want to do it proportionally or lower your depth per pass.

How many flutes are on the bit you are using? Is it a spiral up cut? Down cut? Or straight end mill?

What are the settings to change the speed on the Makita?

Hi @Zach_Kaplan - my feed rate and DOC vary depending on the material and type of cut I’m doing. For example, I have a project running right now with 0.25" bit, 60ipm, pocket with 50% step over and 0.0625 DOC. However, if I use 60ipm with a contour (vice a pocket) on the same exact material, things go all bonkers and I don’t get the contour I’m looking for. Now, in all fairness, things go bonkers around .75" depth when I’m striving for 1" depth. Things have gone completely wrong the first pass of the contour too, but I’m not convinced it wasn’t operator error or some other un-repeatable variable.

So, all I can say as a non-professional CNC non-expert, I have mixed results. I have consistent non-consistency

But my non-consistency has moved from 90% to 10% over the last few months. As it stands now - knock on wood - most of my major problems have been operator error due to pure lack of attention to detail during the step up process. Or, of course, just pure stupidity or ego on my part. We’ve all been there - right?

Example - see the far left - the machine went “bonkers” cutting the profile. But this was after 58 minutes of cutting the pocket in the middle. I’m at a loss - all I know is at this point I will cut the outside contour with the band saw or jig saw and forego the CNC machine. It seems completely ridiculous, but I’m completely tired fighting with it. 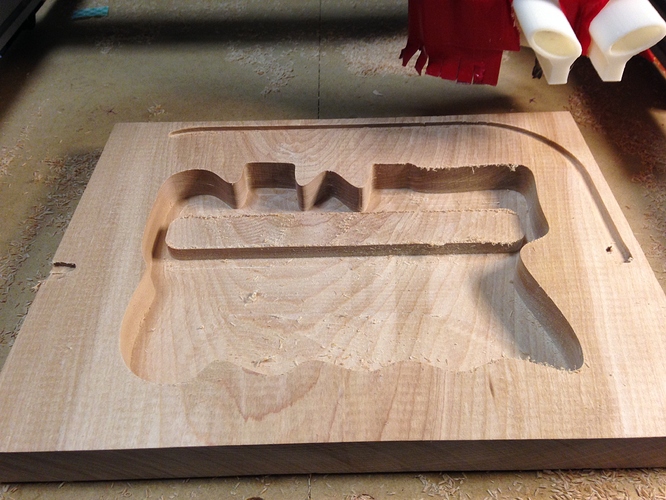 (Makita is set at 2.5 on the dial - I don’t know what that means in terms of RPM - should have bumped it up for the contour…)

@TheGuru can you send me a link to the bit you are using?

It’s not about “conservative” or “aggressive” it’s about material removal rates.

The formula I use is:

With that formula then find the depth of cut that is the smoothest.

One of the areas of black magic in cnc is experience.

As a general rule, I start out fast ipm and shallow and ramp that up until I see a problem.

I’ve had great success with my x-carve. I also do a a couple other things in Easel and would be happy to discuss it with you. I’m about 99% on jobs finishing with success.