I think that was the general consensus!

Yes, avoiding the safety height lifting was mentioned as future enhancement #2 at the top of this thread:

@Rusty is correct: we did a poll on whether we should hold the feature back until we optimized those lifts. Most people voted to defer that optimization in order to get it out sooner.

9 posts were split to a new topic: Unwanted tabs when importing from Illustrator

The tab improvements have been a big help, thanks! I do have an issue with the accuracy when the lift process happens. The bit doesn’t move straight up. I’m not certain whether this is a software or hardware issue. Any ideas? 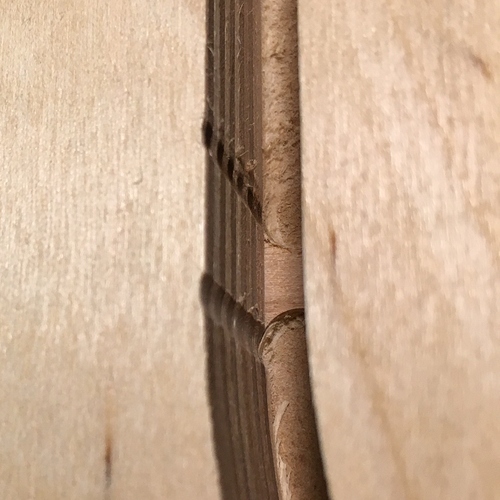 If you are working on a way to prevent the bit from moving to the safe z height, my preference would be for “3D” tabs where x and y keep moving while the z moves up and down.

My guess is this is hardware-related. The lifts that happen for tabs are no different than for any other lifts. If you manually raise/lower your spindle using the jogging controls, do you notice any “wiggle” in the bit?

@Millerama This is just me spitballing an idea, but I was thinking those marks could happen because when the bit stops moving (X & Y) the radial forces on the bit drop to zero and the bit moves back to its “normal” position when retracting. I’m thinking this could happen from having a really long stick out on the bit, or possible run out in the spindle (but there’d need to be a LOT of runout for this to happen i think). As for what you can do about it, I’m not sure. Check for the “wiggle” effect (only happens when moving the Z up and down) like Jeff suggested. Otherwise you could try running the same code with a smaller stick out, but you’d probably need thinner material since that looks like its at least .5" thick material.

I agree with what Jeff said, its probably a hardware issue and not a software issue.

I had the same problem with my stock 24v spindle, is that what you are using? Like what @JeffTalbot and @EricDobroveanu mentioned this is more than likely due to spindle run out, although yours looks a bit more severe than I had.

I’m using a Bosch colt router and this example is with a 1/4" bit that is inserted to the “minimum insertion” line on the bit. I get the same effect with 1/8 bits, but less extreme. Looking at the machine, it looks like I could tighten up the v-wheels on the Z-axis. The X-axis seems to allow some give when pulling up or down on the spindle, but I don’t see what I can do to make that more stable.

When jogging the machine, all axis seem to be smooth, it’s hard to see if the z-axis has a wiggle.

I do agree this is mainly a hardware issue, as the same thing is happening on the path starting point, just not as severe. However, the sample I ran using Vcarve-generated g-code in ChiliPeppr is much cleaner.

What other effects would spindle run-out have that I could check to see if that’s the issue.

After tightening up the z-axis wheels, the effect is minimized. One issue with the tabs on the sample in the photo, is that there was a complete pass that wasn’t removing material, or such a small amount that it wasn’t noticeable. That created additional lifts that weren’t necessary, adding to the gouging effect. I can avoid that by reviewing the toolpath before running to make sure there aren’t extra paths based on tab height and depth per pass.

So, I’ve made things better, but I’m not really sure where to go from here.

I’ve also had the same problem. I don’t think it’s hardware related, I have my tolerances pretty tight and no wiggle in the z-axis. I think it would help if the bit didn’t travel the full thickness of the board when cutting tabs. If it would just lift the height of the tab it would reduce this.

Hey @JeffTalbot has there been anymore progress on this feature yet? I seemed to be running into the problem that I don’t have enough tabs on a project quite often. The current project I’m working on requires at least 12 tabs and I’m only getting 4 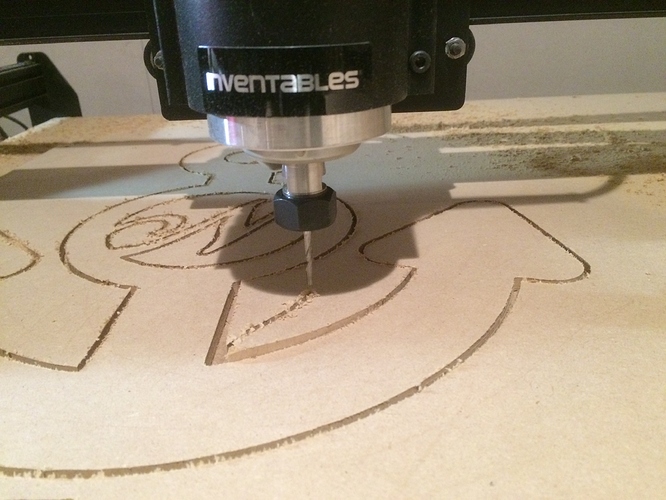 I hear you. We’ll see if we can’t get a customizable tab count in soon.

Btw, what actually happened in that picture? Did the material come free?

I hear you. We’ll see if we can’t get a customizable tab count in soon.

Yes! That would be great! Right now I’m putting the tabs in the best locations I can and then chasing the bit around with 2 pencils and trying to hold down the material.

Btw, what actually happened in that picture? Did the material come free?

Basically, there were no tabs in that area as I had put them at the ends of the long extremities. The 1/4" MDF started to vibrate and then the bit caught the waste material and actually lifted it up off the wasteboard and the router veered off! Luckily the project was fine.

While you wait for tab count control, as a work around, would it be possible to place circles that stop short of 2mm thick on the lines? Kind of like DIY tabs?

Hmmm, I’m going to have to try this! Good idea.

Good idea, but it didn’t work for me.

What didn’t work? Seems like this should work fine, in theory.

@Rusty You could also try double sided tape/carpet tape for pieces with a lot of waste. It isn’t perfect and it can be a pain to break free when the piece is done but it does help support the tabs a bit.