Just noticed that there is a J-Tech Post Processor for Vcarve users.

We have been asked by a lot of people to make a post processor to the Vectric Software so it can be used with the laser.  You ask and you shall receive!  We started one for the X Carve, but it should not really have anything that... 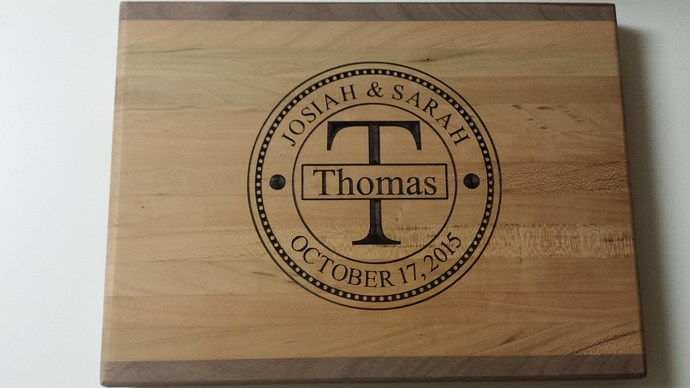 Now I want to add a laser to mine

I use Vcarve with the laser jtech grbl post processor for my xcarve. It works great.BUT every time I save the gcode file I have to physically edit the gcode to remove all z references. It only takes a short while to do using replace all commands…but it’s a pain. Is their anyone out here such as Larry M that is able to edit the post proceesor to eliminate all z references prior to saving or is this a job for Vectric?

Just a portion of a random gcode saved with jtech post processor trimmed down just to show z movement.

After this edit its plain sailing with the laser.

edit the post proceesor to eliminate all z references prior to saving or is this a job for Vectric?

I’ll take a look at it and see what changes I would recommend. Are you using the standard JTech Post Processor from their web site?

Hi Larry…yes the standard jtech post processor from the Vectric site. Now just one other thing I left out…I use 3dp burner/sender for all my laser work. I actually prefer it over picsender which I have a licensed copy of. With 3dp there have4 been no problems with grbl hex files needing to be switched when using spindle after laser…it just works) I changed the above gcode settings as to not complicate issues. I usually run between s5000 and s9999 which is full power with my setup. .

I usually turn on arc processing within grbl, do you want that or just no Z movements?

I’m not sure I understand this. Which version of grbl are you running?

It’s the grbl pp on the Vectric site (mm)

Ok. You really have me confused now.

The Vectric grbl post processor does not support the JTech laser.

I don’t know anything about 3DP, where can I read about it?

What version of grbl do you have loaded into your Arduino/X-controller?

OK…I’m an old idiot…steered you in the wrong direction…its the pp on the Jtech website.

VectricWe have been asked by a lot of people to make a post processor to the Vectric Software so it can be used with the laser. You ask and you shall receive! We started one for the X Carve, but it should not really have anything that specific in it to make it unusable for other machines as well. If you would like to modify it the source file can be edited with a standard text editor pretty easily. We have made now specific versions for different machine controllers. If you have a new post processor for another controller that you would like to share, just let us know!

The basic concept is that you set up a tool in V Carve Pro that has the laser parameters to it (the spot size is the drill bit width). Then, you draw in V Carve Pro (or other vectric software) to get the file that you want. When you make your G Code, the post processor will change all of the “retract” portions in the file where the spindle moves up to a laser OFF command. Viola!

We have a couple of versions depending on the controller you use. Here are the download links:
(*You need to right click “save link as” to save it versus opening the file… * )

I don’t have any way to test this, but here is something you can try. It should only be used for laser work.

Do you know where to copy the file to so that Vcarve can find it?

Yes I can place it in the pp file of the application files of vcarve. But I noticed on your file it still shows z values

But I noticed on your file it still shows z values

They should be removed.

Just tried it and NO sign of z movements!!! I think you may have solved my issues…Once again.Your blood is worth bottling.

Once I remove all the former z feed and s lines it works perfectly well.
I appreciate any further help you can give.

I have a Vectric PP I downlaoded (I think from the mach3 forum) based off of the grbl PP that has all z-axis movement removed and works great with my J-Tech Laser. I can upload it when I get home if you would like to compare/try it out.

One of the reasons I"ve been slow to adding a laser to my X-carve is the fact my earlier research showed I had to reflash my grbl arduino with laser specific firmware code to use the laser and then redo it back to where it was before to do normal carving. ( I don’t have the latest Inventables controller, but the one that preceded it with all the open wiring and fans)

Does this JTech PP for Vectric software change that or do I still have to mess with changing my arduino firmware everytime I want to switch back and forth?