Recently, I was able to get some additional unexpected funds and decided to sink them into the money pit known as my CNC.

Everything came in earlier this month and this past weekend I started the upgrading process.

First I had to machine a new mounting plate for the spindle mount. Full details as to why are explained in my Linear Z thread. I also made this one a tad bit taller to more easily engage the limit switch…the last one more or less hit the switch by sheer luck and nothing else. I had much better success with this aluminum machining than the last one. The Z axis, in my opinion, made all the difference as it kept a consistent depth throughout and didn’t cause the machine to try to carve too deep and go off course (which is what happened last time) but the beefier motors probably helped as well and not having loose X axis Vwheels.

Once I got that machined, it was time for destruction.

I made my original Z axis take the CNC-RP style mounts, specifically for the Hitachi upgrade in mind. This allowed an easy way to change between the Dewalt and the Hitachi. 4 screws later, and the Dewalt was removed. I had to remove the plate from the Z slide and then put the new one (8 scrrews off, 8 screws on). A fresh set of screws with nylon patch were used. 4 more new screws later and the Hitachi was on the Z axis: 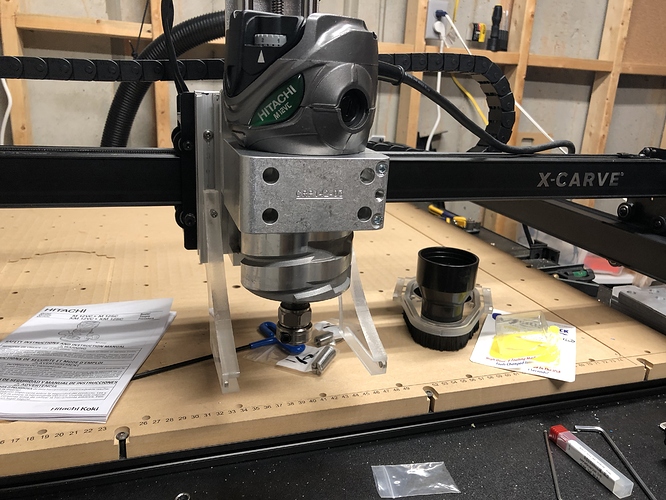 I’m glad that I made the choices I made concerning mounting plate thickness because otherwise, I’d have lost some vertical travel (that’s close!) or be scrambling to fix it:

Then came the Y rails. These were pretty painless. Took the belts off of the rail, opened the Vwheels up, then I used a jack stand (link) to support the gantry. I removed the 2 Y end plates, changed the Tee-nuts out between the 2 pieces (important step!), slid the rail out and slid the new one in. Use the jack stand to lift up the side 1" and screwed it in place. Rinsed and repeated on the other side (didn’t want to leave it crooked for too long).

IMPORTANT NOTE: If you do this upgrade, you need to flip your Y axis limit switch around due to the wide slide config. The same thing has to be done if you upgrade the X axis. It’s MUCH easier to flip it around with the rail removed so I did that before I put the rail in. And as it turned out, my X plate had tapped holes for the limit swich so I ditched the nuts that I used previously. 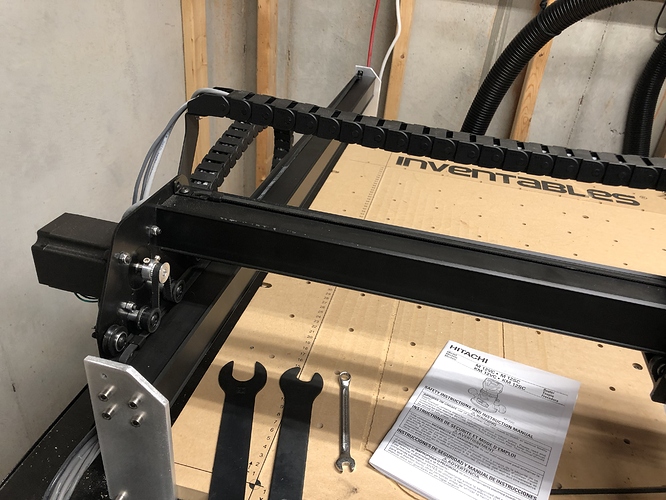 The next step was to install the Musclechuck into the Hitachi. Was pretty straight forward. 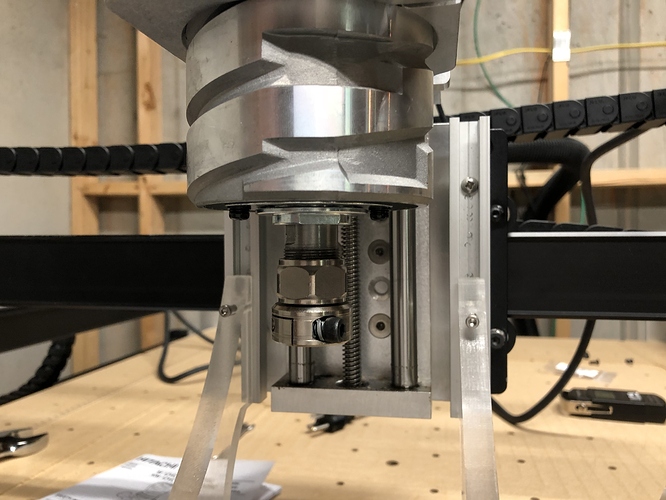 I went to put a bit in and this is where the problem started. The collet inserts weren’t fitting well and the easy to change nature of the Musclechuck was just not functioning. I fiddled with it and was getting nowhere so I emailed the company, described the problem, and figured I’d hear back sometime this week. About maybe 30 minutes later, I get a call and it’s the guy at Musclechuck. I spent a bit on the phone talking about the problem, trying a few things, etc. and I’m sending the collets and chuck (and a sample bit) back to him today and he’s going to figure it out. It’s a tolerance stacking issue most likely but he said it’l be taken care of. To call out on a Sunday to try to fix a problem is impressive CS and really helped the situation. They are getting dropped off at the PO later today.

Things left to do:

I don’t currently have any orders for the CNC but, in a pinch, I can always throw the Dewalt back on there quickly and get back to carving.

Hopefully I’ll be back up and running next week and will have a carve done with this new setup.

prelim thoughts on the Musclechuck?

that might be interesting on the Makita router to extend it a bit - on par with Dewalt length.

Once I get it working, it should be amazing. It’s built very robust and it feels like it’ll withstand anything.

I’ll have a better shaped opinion on it once I get a working one and an explanation as to exactly why this one didn’t work.

There were a few comments that caught me as a surprise while talking with them yesterday so the verdict is still out.

The 3rd gen belts are much stronger compared to the 2nd gen that Inventables sells. They are actually Gates belts and not potentially some knock off.

They’ve handled a lot and even the first ones handled a LOT.

The good thing is a 9mm upgrade is quick and easy if I do need to do it.

I really wanted the Hitachi but ended up with a Sears one cheap. I will be interested in how you like it. Now when I upgrade I am going with a water cooled spindle.

Same here. When I upgrade it will be with a water cooled spindle because they are much quieter, but the Hitachi M12VC is not as loud as other spindles in its class.

I realized I haven’t updated this in awhile so here goes!

I went through an ordeal with the Musclechuck. John was amazing throughout the process and it ended up being a Hitachi issue and not a direct Musclechuck issue. He got it working amazing and it’s been rock solid so far.

I ended up rebuilding my Xcarriage to correct some Vwheel issues but I’ve been up and running for a few weeks now.

I did some carving today and I think it shows the fruits of the upgrade:

I started with a 0.2” DOC, 100 ipm and 75% step over and it was chattering a bit more than I’d like. The board was unplaned so it might have been cutting deeper than 0.2” in spots.

Here’s the carve in action: 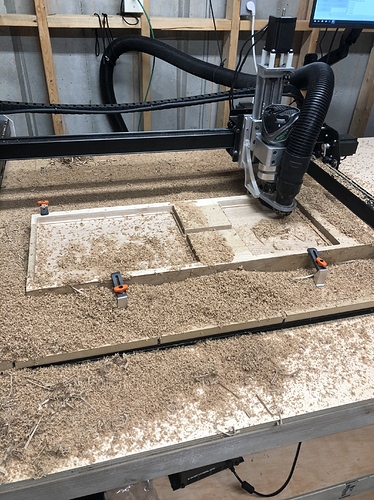 With a 11k RPM setting, it was making chips and not dust. It was a bit nerve racking for the first few passes but it ended up being smooth as I’ve ever carved and just removing a bunch of material.