Jukebox Facade for a Game Room

We have a large room in our basement with pinball machines, air hockey, skee ball, and a home theater.
In the middle of one of the walls is a large cut-out space that is open to a closet under the stairs. This space has adjustable shelves in it and was designed to be the stereo component closet for the home theater. I have never liked how ugly this big cutout shelf looks in our super nice family room. I never would have put something like that in a home to begin with, but it was there when we bought the place. We have tried multiple times to figure out some sort of cover for it, but we have never been satisfied till now. We came up with the idea of using the x-carve to create a custom jukebox facade for the shelves with speakers behind to play music. Here is how it turned out: 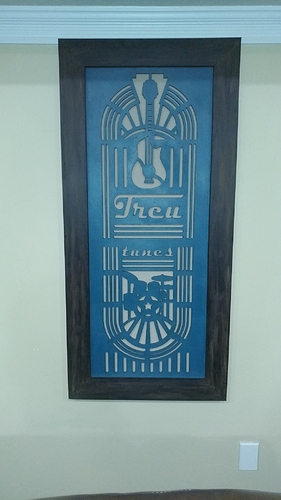 The size of the main Facade itself is 18" wide by 47" tall and it slides right into the pocket perfectly. The frame arround it adds another 4.5" on each side. the openings are covered with speaker fabric that was died to match the color of the wall. We have a Sonos Play5 speaker behind the facade and it sounds amazing. If you are curious about the Treu, well that is our last name, so we decided to include it in the design.

The facade is cut from 1/2" birch plywood and the frame is poplar. My wife created the design in Adobe Illustrator and then exported it as an SVG. From there, it was a snap to import it into Easel and it took about 10 hours (in two different sessions) for the cut to finish.

Here are some progress pictures: 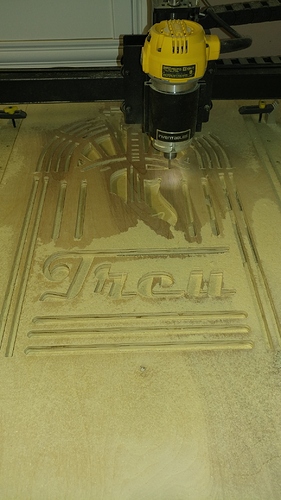 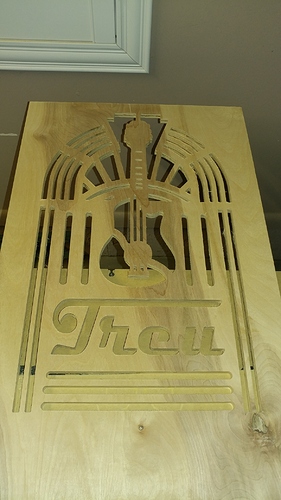 Since my x-carve only has 750MM of production area (1,000MM wasteboard). I had to cut the facade in two sessions and move the board up to cut the lower half. I was worried about getting things lined up exactly right, but it wasn’t that difficult in the end. 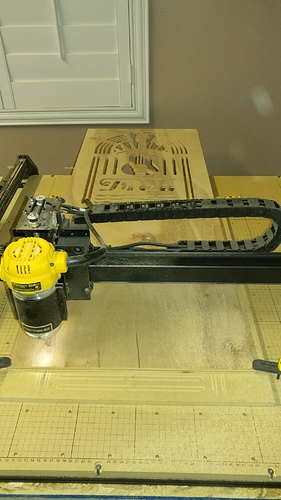 This was my first real project that required more than 5-10 minutes of cutting time. The biggest thing I learned is that I absolutely need a dust boot. I ran a test run with the artwork on MDF prior to cutting the Birtch. I only cut about 10% of the image and it made such a huge mess and was extremely irritating to my lungs. I won’t use the x-carve to cut MDF again until I can get the dust book installed. I hope to have that soon.

Very nice, and a great idea!

Thanks for the compliments! I’m just a beginner when it comes to these things. I sure am having a good time though.